Mortgage rates for US homebuyers had their biggest jump in more than a year last week, as higher Treasury yields and a rise in inflation expectations begin to feed through to the real economy.

The average 30-year US mortgage rate sat at 2.99 per cent on Friday, according to Bankrate.com, having hit an all-time low of 2.8 per cent as recently as February 10.

The shift, lenders and analysts said, was driven by mortgage-bond investors concerned that as the virus subsides, higher growth and inflation could push interest rates up further, leaving them nursing losses. As bond buyers demand higher yields, mortgage lenders, who sell into the bond market, must charge borrowers more to protect their profits.

“The market is looking out two or three years and thinking that rates are going to rise,” said Todd Johnson, a division manager in Wells Fargo’s mortgage unit.

Treasury yields have been rising since August, when the 10-year yield bottomed at 50 basis points, but upward pressure has intensified as Joe Biden’s administration readies a new round of economic stimulus. On Friday the 10-year yield hit 1.35 per cent.

Consumers, meanwhile, are rushing to secure cheap mortgages while they can, adding to a supply/demand imbalance. “Consumers are hearing inflation talk and saying ‘Holy crow, I’d better lock in a mortgage,’” said Paul Buege, president of Inlanta Mortgage.

In January, existing homes sales rose 24 per cent from a year earlier, according to the National Association of Realtors. The median US home price was up 14.1 per cent, year on year. 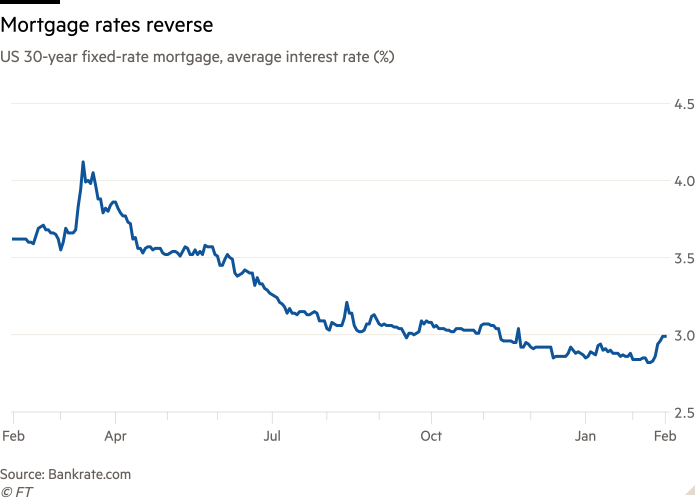 That the mortgage market changed direction suddenly in the past week is because of several technical factors that made a return to 3 per cent mortgage rates a self-fulfilling prophecy, said analysts.

When rates fall, borrowers can refinance, cutting the life of their loan short, but when rates rise, borrowers hold on. For investors in mortgage bonds, this means that in a rising rate environment, the expected life of their bonds can suddenly increase, and they often respond by selling bonds or taking equivalent actions.

This “convexity hedging” puts still more pressure on the market, leading to what the veteran mortgage analyst Harley Bassman has dubbed a “convexity vortex”.

A vortex formed in the past few weeks because there is a large cohort of mortgages set to fall “out of the money” as rates approach 3 per cent — meaning that the money borrowers can save by refinancing will no longer outweigh the cost and hassle.

Satish Mansukhani, head of mortgage-backed security research at Bank of America said: “1.25 per cent [yield on the Treasury] was a level we had pegged as seeing some mortgage convexity flows, and the flows appeared right on cue.” 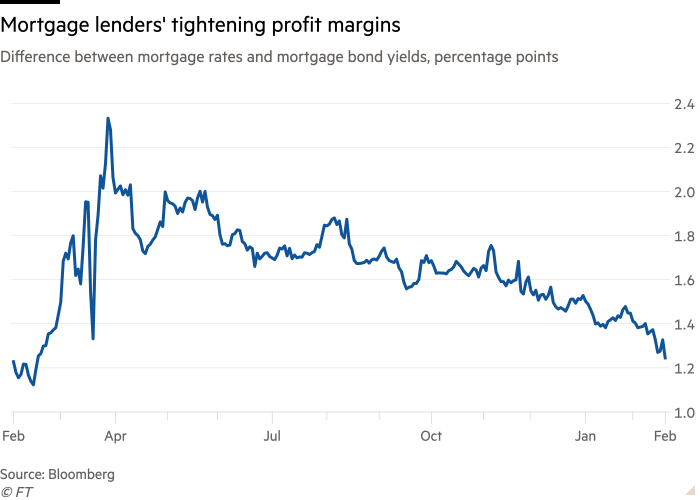 A final factor is lenders’ profit margins. When interest rates fell quickly a year ago, refinancing demand exploded, exceeding the capacity of lenders to close loans. This meant that lenders could keep loan prices high and earn high margins, as measured by the so-called primary/secondary spread — the difference between mortgage rates and the yield on mortgage bonds.

As lenders expanded capacity, margins fell, allowing mortgage rates to come down even as Treasury yields rose. With the spread now back near pre-pandemic levels, the lenders may have concluded that their margins were tight enough.

Up until this week, “originators could cut their margins and keep rates stable”, said Arun Manohar, analyst at Nomura. But the current level of the primary/secondary spread, at about 1.25 per cent, is approaching a “fair” level of about 1.1 per cent, he said.