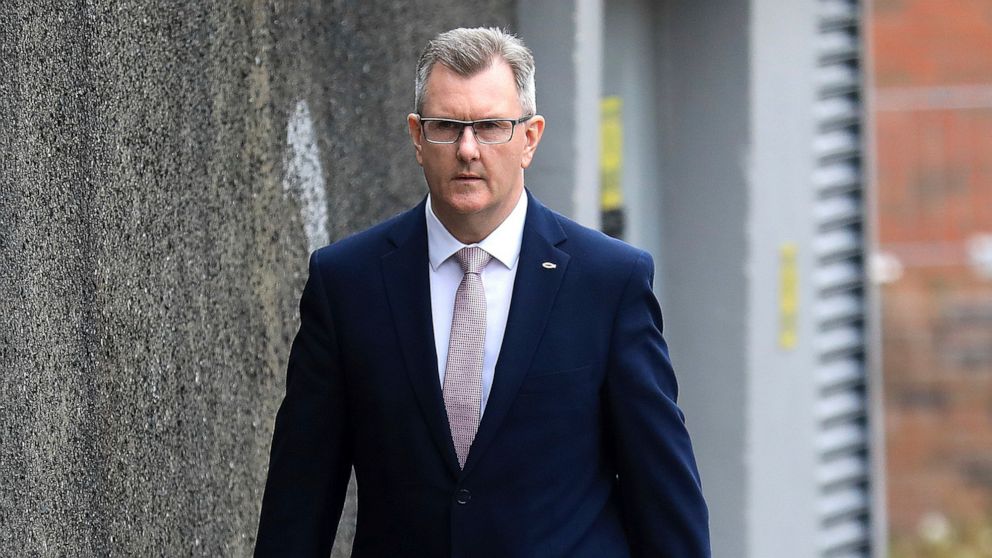 The leader of Northern Ireland’s largest British unionist party says the U.K.’s divorce deal with the European Union could collapse the Belfast government and trigger a new era of violence and instability

LONDON — The leader of Northern Ireland’s largest British unionist party heightened post-Brexit political tensions on Thursday, saying the U.K.’s divorce deal with the European Union could collapse the Belfast government and trigger a new era of violence and instability.

In a speech in Belfast, he said the agreement known as the Northern Ireland Protocol “fundamentally undermines … the economic integrity of the United Kingdom and Northern Ireland’s position in it.”

“We are totally opposed to the protocol as it presently exists,” Donaldson said. “We will neither accept it nor will we work it.”

He said that the problems must be resolved “in weeks and not months or years,” and threatened that DUP ministers would quit Northern Ireland’s Protestant-Catholic power-sharing administration rather than implement the deal in its present form. That would effectively collapse the government, which is run by the DUP and Irish nationalist party Sinn Fein.

He also said DUP ministers would boycott regular meetings with politicians in Ireland as a protest against the new rules.

“I say not as a threat, but as a matter of political reality that our political institutions will not survive a failure to resolve the problems that the protocol has created,” said Donaldson, who was elected DUP leader two months ago.

The crisis straining U.K.-EU relations stems from trade arrangements for Northern Ireland, the only part of the U.K. that has a land border with the 27-nation bloc. The divorce deal the two sides struck before Britain’s departure means customs and border checks must be conducted on some goods moving between Northern Ireland and the rest of the U.K.

Tensions over the new rules contributed to a week of street violence in Northern Ireland cities in April that saw youths pelt police with bricks, fireworks and gasoline bombs.

Donaldson said the violence had died down, “but I fear that unless we grapple with this issue, this will prove to be merely a pause, rather than an end to the disorder.”

Britain and the EU both say they want to fix the problems, but they remain far apart on solutions.

Britain’s Conservative government has accused the bloc of being needlessly “purist” in implementing the rules. The U.K. is seeking ultimately to remove most checks, replacing them with a “light touch” system in which only goods at risk of entering the EU would be inspected.

In the meantime, Britain has postponed indefinitely the start of many checks on goods going to Northern Ireland, which were due to be phased in after the U.K. left the EU’s economic embrace at the end of 2020.

The EU says it won’t renegotiate the agreement and is calling for Britain to implement the deal that Prime Minister Boris Johnson agreed to.

The two sides have agreed to keep talking. European Commission Vice-President Maros Sefcovic, the bloc’s senior Brexit official, is visiting Northern Ireland on Thursday and Friday to meet with businesses and politicians.