For five days this month, Jevlan Shirmemmet and other Uighur activists protested outside the Chinese embassy in Ankara, where they demanded to know the whereabouts of missing family members in China’s Xinjiang province. But on the sixth day, Turkish police stepped in.

They prevented the activists from gathering outside the diplomatic mission, positioned themselves outside their hotel and accompanied them wherever they went.

The stand-off reflects the difficult balancing act that Turkey, which is home to tens of thousands of exiled Uighurs, must perform with Beijing, not least because it wants closer ties and investment and is reliant on China for supplies of coronavirus vaccines.

President Recep Tayyip Erdogan, who casts himself as a champion of oppressed Muslims around the world, has in the past been a vocal critic of China’s actions in Xinjiang, the north-western region where the Chinese Communist party has interned more than 1m Uighurs, Kazakhs and other Muslims.

“On the one hand, Turkey wants to stand up for us, we know that, we feel it,” said Shirmemmet, 29, whose mother has been detained in Xinjiang since early 2018. “But they aren’t able to. We feel like their hands are tied.” 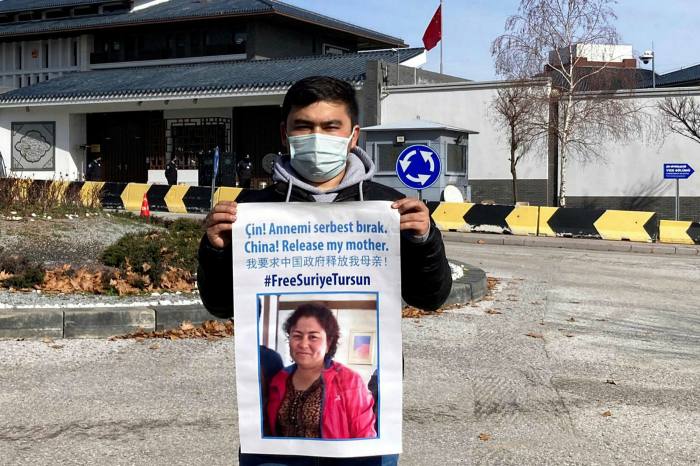 Analysts say that the plight of China’s Uighurs poses a problem for Erdogan, who is seeking alternative global partners at a time when relations with the west are deeply strained. “They are Muslims, they are Turks, and Turkish voters are sensitive about the issue,” said A Merthan Dundar, director of the Asia-Pacific Research Centre at Ankara University. “The government cannot establish very close relations with China. But it doesn’t want to cut all ties.”

In years past, Erdogan was one of the most outspoken global Muslim leaders concerning the plight of Uighurs, who are seen in Turkey as part of a broader global family of Turkic peoples whose rights Ankara has a responsibility to defend.

But opposition parties have accused Erdogan’s government of toning down its criticism to avoid upsetting Beijing. “Europe and America have spoken out against the oppression of our Uighur brothers in China . . . But there is still not a sound from Ankara,” Meral Aksener, leader of the opposition IYI party, said last month. Turkish officials insist that they continue to raise their concerns with Beijing behind closed doors.

Some figures in Erdogan’s government have advocated for stronger ties with Beijing in order to lure Chinese capital at a time when foreign direct investment from western countries has dwindled.

Investment so far has been limited, with the value of Chinese investment in Turkey standing at $1.2bn in 2019 in terms of equity capital, according to central bank data, compared with more than $100bn from Europe. 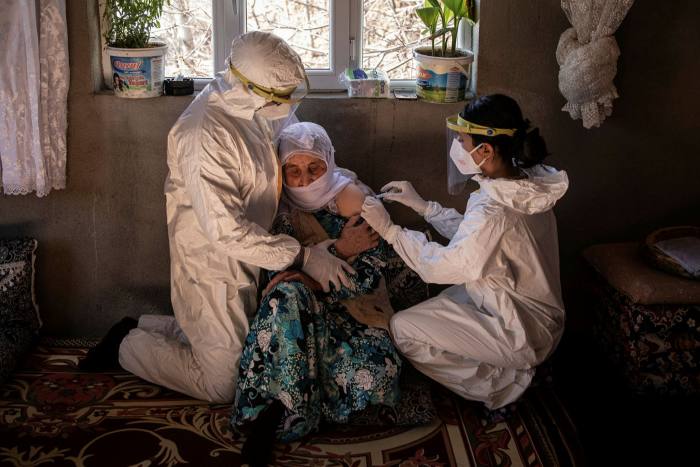 A woman in eastern Turkey receives the CoronaVac vaccine. Turkey has ordered 100m doses of the Chinese-made jab © Chris McGrath/Getty

Ankara is eager for more. The country’s sovereign wealth fund has been courting Chinese investment, and plans to open an office in China in the first half of this year. Ankara also has a swap agreement with China’s central bank that helped to boost the appearance of Turkey’s depleted foreign currency reserves by an estimated $2bn.

The pandemic has added an extra complexity to the relationship. While Turkey has struggled to procure European-made vaccines, it has a deal in place for 100m doses of the CoronaVac jab made by Chinese drugmaker Sinovac Biotech. Delays to the shipments in December coincided with a decision by China’s parliament to ratify an extradition treaty between the two countries. Turkey has yet to ratify it.

Yildirim Kaya, a member of parliament from the opposition Republican People’s party, said that the ratification of the treaty by Beijing had created “a great deal of panic among Uighur Turks who have escaped from China to Turkey”. In a set of questions posed to the Turkish health minister, he demanded to know if Ankara had faced pressure to ratify the deal to speed up the delivery of the vaccines. Turkish foreign minister Mevlut Cavusoglu reacted angrily to such suggestions. “We don’t use Uighurs for political purposes,” he said. “We defend their human rights.”

Analysts are also sceptical that China would use the vaccine, of which Turkey has already administered 6.2m doses, as such crude leverage. Ceren Ergenc, an associate professor of China studies at Xi’an Jiaotong-Liverpool University in Suzhou, believes it is more likely that Ankara was doing Beijing a favour by signing a deal for a vaccine that had yet to be approved in China — and that still has question marks over its efficacy.

“It happened at a moment when China needed not necessarily the money but the prestige in the international system about the credibility of its vaccines,” she said. “There’s a kind of indebtedness or reciprocity — Turkey still needs financial support from China so it did this act of buying the Chinese vaccine that had at the time not yet undergone all phases of testing.”

In response to questions from the Financial Times, the Chinese embassy in Ankara said the recent protests had sought to “smear” China and that their actions had threatened the safety of the diplomatic mission. It strongly rejected the notion that it had used Turkey’s need for vaccine doses as political leverage as “absolutely unfounded conjecture and malicious misinterpretation”.

Still, the episode has left many members of the Uighur diaspora feeling deeply nervous about their place in Turkey. “China sees us as criminals,” said Mirzehmet Ilyasoglu, who joined this month’s Ankara protests to demand information about his missing brother, brother-in-law and four friends. “We hope that this [extradition] agreement won’t come before parliament, but if it is signed then our concern will grow.”