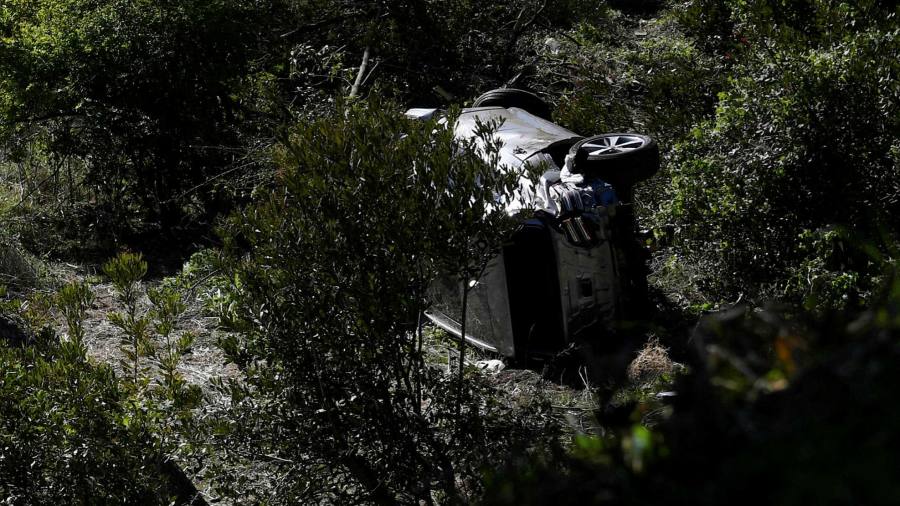 Tiger Woods was injured when the car he was driving hurtled off a road in a Los Angeles suburb and rolled over, sending the golfing legend to a hospital where he was undergoing surgery for “multiple” leg injuries.

According to Los Angeles county police, no other vehicles were involved in the wreck, and the Los Angeles Times, citing unnamed law enforcement officials, reported that Woods’ car was travelling at a high rate of speed when it lost control.

Authorities did not immediately disclose the severity of his injuries, but Mark Steinberg, Woods’ agent, issued a statement disclosing he had been taken into surgery for leg injuries.

The Los Angeles County Sheriff’s Department said Woods was the driver and sole occupant of a vehicle involved in a rollover collision around 7am local time, with damage significant enough to require the use of the so-called jaws of life to extricate the star golfer from the wreckage.

Footage of the crash site in Rancho Palos Verdes, south of LA airport, captured by local television station NBCLA showed a silver SUV rolled over off the side of a boulevard with severe damage to both the front and back of the vehicle.

Woods, 45, is among golf’s all-time greats, tied for most career wins on the PGA Tour and second in total major championships behind Jack Nicklaus. After winning the Masters Tournament at the age of 21 in 1997, he quickly became one of the most well-known athletes in the world, starring in advertising campaigns for Nike and becoming the driving force in golf’s resurgence in TV ratings and popularity.

A series of personal setbacks, including an infidelity scandal, back injuries and a reckless driving conviction in 2017, diminished Woods’ presence on tour for years, though he completed one of sport’s most storied comebacks by winning the 2019 Masters Tournament more than a decade after his last major victory.

As authorities disclosed the severity of the accident, fellow players and tour officials offered their best wishes and concerns for Woods.

“Barbara and I just heard about Tiger’s accident, and like everyone else, we are deeply concerned,” Nicklaus wrote on Twitter. “We want to offer him our heartfelt support and prayers at this difficult time. Please join us in wishing Tiger a successful surgery and all the best for a full recovery.”

“I’m sick to my stomach”, said fellow professional golfer Justin Thomas on Tuesday, during a press conference for the WGC Workday Championship in Florida. “It hurts to see one of your closest friends get into an accident.”

Over the weekend, Woods hosted the Genesis Invitational Tournament in northern LA, where he said he was still recovering from a fifth back surgery and could not pinpoint a timeline for a return to play.

Asked if he aimed to participate in this year’s Masters, he appeared uncertain, saying: “I don’t know what the plan is.”