The new politics of climate change

The new politics of climate change

A billionaire, a novelist and a professor all write a book about climate change.

That may sound like the start of a joke but it is not, especially for philanthropist Bill Gates and author Jonathan Franzen. Their books have come out just as Michael E Mann, one of the world’s best known climate scientists, has published a book accusing each of abetting new forces of inactivism slowing efforts to tackle climate change.

It is hard to think of another time the publishing world has delivered such an engaging spectacle. As raging wildfires and deadly floods drive a new sense of urgency, the debate about how to curb global warming has spread far beyond the scientists, economists and activists who once dominated the field. We are all, as it were, environmentalists now.

Yet the scale of the climate problem makes it hard to know what constitutes a meaningful response. Is it enough to give up meat and flying? Do we need a slew of technological breakthroughs? Or is disaster now inevitable and any sort of action too late?

These three books address all these questions, but none so comprehensively as Mann. The Pennsylvania State University professor has had an unusually vivid view of the battle to cut the world’s dependence on fossil fuels.

He was still in his early thirties in 1998 when he and two colleagues published what has been called the most controversial chart in science: the hockey stick. At a time of widespread denial about climate change, their simple graph showed global temperatures had varied little for centuries, but shot up after fossil fuel burning took off after the industrial revolution. In other words, the world was warming at a rate unseen in modern history and humans were causing it.

Mann faced a blistering effort to discredit his work — and even death threats. In the US, Republicans in Congress, many of them recipients of fossil fuel industry donations, accused him of inaccuracy, fraud and worse, as he recounted in his 2012 book, The Hockey Stick and the Climate Wars. Nearly a decade later, the science behind the hockey stick remains robust. Yet Mann makes a convincing case that the fight against climate action continues — under different terms of engagement. “Outright denial of the physical evidence of climate change simply isn’t credible any more,” he writes in The New Climate War. The war on the science has ended, he says. But in its place has come a war on climate action, or “a softer form of denialism” in which “inactivists” deploy a mix of deception, deflection and distraction to delay cuts in emissions.

Many readers will be surprised to learn that one of Mann’s chief complaints concerns flight-shaming, vegan diets and other types of individual behaviour widely thought to be central to tackling climate change. Personal actions can help, and often set a sensible example. But, as Mann writes, they cannot rival broad, systemic measures such as carbon pricing or ending fossil fuel subsidies. For all the scrutiny of flying, it currently accounts for about 3 per cent of global carbon emissions. 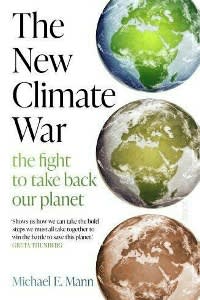 Worse, some research suggests a focus on personal behaviour creates an illusion of progress that can erode support for more effective collective policies. One study found the more people switched off lights and scrimped on household energy use, the less likely they were to support a carbon tax.

Dwelling on individual behaviour is also a “particularly devious” deflection strategy, Mann argues, because it breeds divisive finger-pointing among campaigners and attempts to render leaders as elite hypocrites. Celebrity climate activist Leonardo DiCaprio, for instance, is often lambasted for flying in a private jet. After Al Gore released his 2006 documentary, An Inconvenient Truth, claims emerged that his home used 20 times more energy than the average American house.

Mann shows attention on personal action did not occur in a vacuum. Oil companies were early promoters of the personal carbon footprint calculator and there is a well-thumbed playbook for industries seeking to divert attention from their own activities to individuals using their products. The US gun lobby claims “guns don’t kill people, people kill people” to fend off tougher laws; beverage groups back campaigns against roadside litter created by their own bottles and cans.

Some of Mann’s other examples of soft denialism are even more insidious because they are promoted by green activists themselves. Exhibit one: what he calls climate “doomists” who promote the idea that all hope is lost and action is fruitless, which is where Jonathan Franzen comes in.

The best-selling US novelist is no climate denier. But in 2019 he caused an outcry with an elegantly written New Yorker magazine article titled “What if We Stopped Pretending?” which argued climate disaster was all but certain and it made sense to focus on how to use finite resources to deal with it. His new 70-page booklet bears the same title and includes the article, along with an interview Franzen gave a German journalist to expand on his views. “All-out war on climate change made sense when only as long as it was winnable,” says Franzen. Human nature has made meaningful climate action almost impossible and “a false hope of salvation can be actively harmful,” he argues. Preparing for floods, fires and refugees might be more pertinent.

The essay reads at times like an elegiac counsel of despair. For the pugnacious Mann it is far worse. He devotes nearly four pages to what he calls “one of the most breathtakingly doomist diatribes” ever written. The fundamental problem with the article, Mann rails, is that it attempts “to build a case for doom on a flimsy foundation of distorted science”. 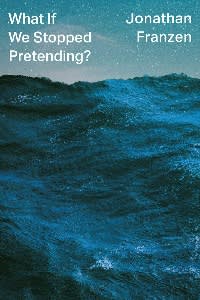 Mann argues that it is still possible to avert 2C of warming and that every bit of carbon that is not burnt prevents additional damage. “There is both urgency and agency,” he says. Social and political changes also give him cause for cautious optimism. Apart from the fact that outright denialism is fading and that climate action advocates such as Joe Biden are being elected, he is buoyed by the youth climate movement and the rise of investors rethinking the risks of fossil fuel investments.

In addition, he thinks the Covid crisis has reawakened appreciation of science, while pandemic recovery plans have opened opportunities for green investments. “We appear to be nearing the much-anticipated tipping point on climate action,” he writes.

Yet the urgency of the problem remains, which is what leads Mann to cite Bill Gates on several charges of climate inactivism. 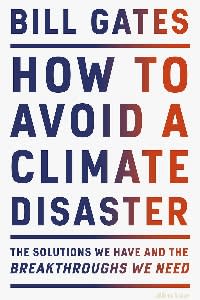 The Microsoft co-founder is not an obvious target. Unlike other billionaires bent on reaching Mars or the Moon, Gates has spent vast sums to improve the lives of the poorest on this planet. He warned of the need to prepare for a global pandemic years before the current crisis and is now leading vaccine efforts to defeat Covid-19. He is also a lavish backer of technologies to avert what he says is the very real threat of global warming, as he details in his book, How to Avoid a Climate Disaster.

Yet Gates has long irked many climate campaigners. He has raised doubts about using green energy in developing countries (a form of inactivism for Mann) and scorned the idea of fossil fuel divestment, telling the FT in 2019 it had “zero” impact on emissions.

In his new book, Gates reveals he actually divested his direct holdings in oil and gas companies in 2019. He still supports what Mann calls “non-solution solutions” offering the illusion of climate action, such as geoengineering schemes to offset warming carbon emissions. Gates has long been among the largest funders of research into such efforts, which can range from directly capturing carbon dioxide from the air to shooting sulphate particles into the atmosphere to mimic the cooling effects of volcanic eruptions. 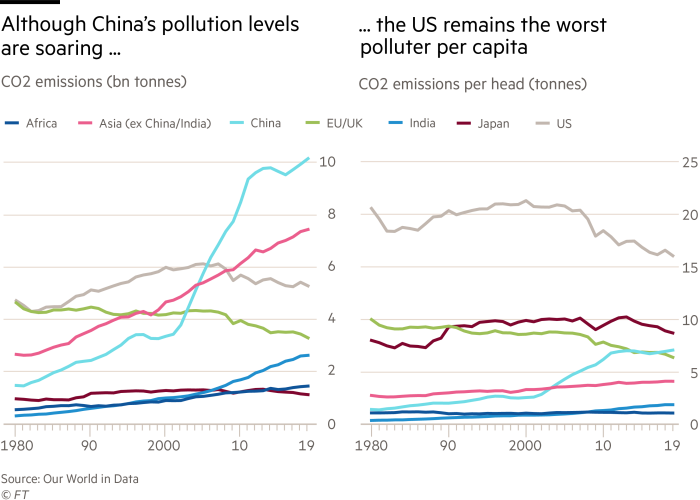 For Mann, these schemes come under the heading of “dangerous techno-fixes” that appeal to free-market conservatives — by suggesting government regulation is unnecessary — but entail hugely risky “tinkering” with complex Earth systems we do not fully understand.

Gates acknowledges such concerns, admitting that unproven geoengineering concepts raise “thorny ethical issues”. He adds that his funding for such efforts is “tiny” compared to his other climate financing. But he still thinks the approach is worth investigating “while we still have the luxury of study and debate”.

The idea that there is time to develop meaningful climate solutions underpins a central theme of the book, namely that existing green technologies are not enough and must be augmented by big innovation breakthroughs. “We have some of what we need, but far from all of it,” he says.

This puts Gates on one side of a debate between those who think the climate problem will be solved by technology, versus those who believe the technology needed is here and what is required is more political will and policies to deploy it.

Mann belongs to the latter camp. “Sorry Bill Gates, but we don’t need a miracle,” he writes, pointing to academics who showed years ago that existing renewable energy and storage technologies could meet up to 80 per cent of global energy demand by 2030, and 100 per cent by 2050.

The framework Gates uses to support his view is based on his idea of the “green premium”, or the extra cost of zero-carbon technologies compared with fossil fuel alternatives. The average cost of a gallon of conventional jet fuel, for instance, is $2.22, while jet biofuels cost about $5.35, so the green premium adds up to $3.13.

He argues that clean technologies should only be deployed if they have a low or zero green premium, which by his analysis excludes all but a handful of options, such as home air heat pumps in some cities which in certain cases can actually be cheaper than fossil fuel alternatives. That is, he admits, partly because fossil fuel prices do not reflect the damage they inflict, and meaningful carbon pricing will be “crucial” to eliminating green premiums.

This analysis is useful. So too is his accessible description of what needs to be done to tackle climate change: bring the 51bn tons of greenhouse gases typically emitted globally each year down to zero.

Some readers may find his folksy tone, and occasional fart joke, more agreeable than Mann’s punchier work. Others may wonder how Gates managed to write an entire book on climate action that scarcely mentions the powerful political forces bent on thwarting it.

Either way, his approach leads him down some curious paths, especially when it comes to the state of existing renewables. Readers in the UK, who have been getting more than 10 per cent of their electricity from offshore wind farms this year, will be surprised to see Gates describe offshore wind as a green idea “currently in the proof phase” of market development, along with low-carbon cement.

Likewise, Gates is oddly dismissive of the idea that emissions should fall fast this decade, despite UN science reports showing global emissions should halve by 2030, and reach net zero by 2050, to avoid 1.5C of warming. “Making reductions by 2030 the wrong way might actually prevent us from ever getting to zero,” he claims. We might, for instance, replace coal power plants with gas-fired ones that have carbon capture equipment but still emit greenhouse gases. Theoretically, that is a risk. But so is waiting years for innovation breakthroughs that do not arrive.

Ultimately, Gates and Mann probably agree more than they disagree. Each wants action to curb warming emissions that pose a dire threat to the climate and, considering the torrid state of climate disputes in very recent history, that is a welcome relief.

How To Avoid A Climate Disaster: The Solutions We Have and the Breakthroughs We Need, by Bill Gates, Allen Lane, RRP£20/Knopf RRP$26.95, 272 pages

What If We Stopped Pretending? by Jonathan Franzen, Fourth Estate, RRP£7.99, 70 pages