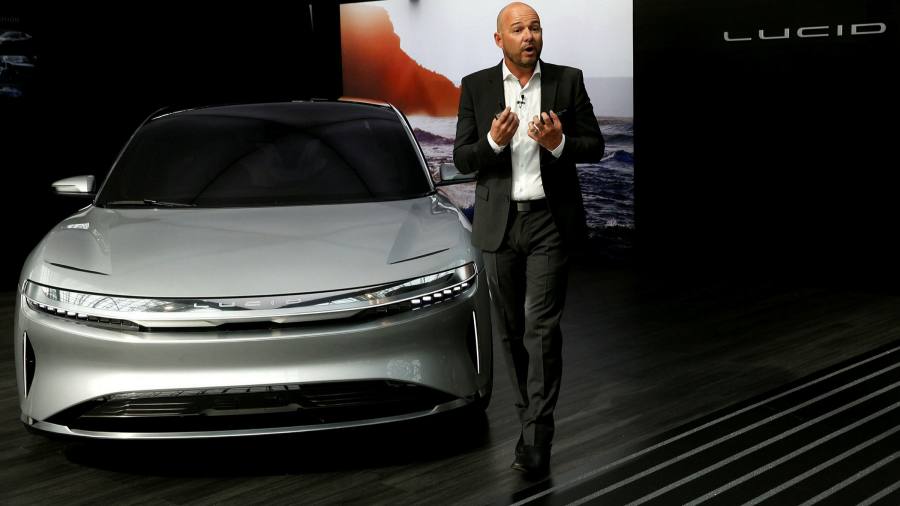 Electric vehicle start-up Lucid Motors has agreed to go public in a $24bn deal with a blank cheque company controlled by veteran dealmaker Michael Klein, in the largest such reverse merger to date.

The California company, which is majority owned by Saudi Arabia’s sovereign wealth fund, will combine with Churchill Capital IV, the fourth of Klein’s special purpose acquisition companies, which raised $1.8bn in July.

The deal had been widely rumoured and investor excitement had sent shares in the Spac up almost 500 per cent so far this year — but they fell by more than a quarter in after-hours trading as financial details were revealed on Monday.

As part of the transaction, Lucid will receive the cash raised by Churchill Capital IV as well as $2.5bn of new money from investors again led by Saudi Arabia’s Public Investment Fund, along with BlackRock, Fidelity and others. The so-called private investment in public equity transaction — a fundraising that often accompanies Spac deals — ranks among the largest ever.

The Pipe was sold to investors at $15 per share, a 50 per cent premium to the Spac’s net asset value, but a 74 per cent discount to the share price at Monday’s close. The PIF holds up to 85 per cent of existing Lucid shares and is expected to hold up to 62 per cent of the shares outstanding after the deal is completed.

The reverse merger agreement between Lucid and Churchill Capital IV implied a valuation for the carmaker of just under $12bn, while the $15-per-share Pipe deal sets a valuation of $24bn.

Churchill Capital IV shares fell to about $42 in the after-hours session, from $57.37 at the close.

Despite the proliferation of electric vehicle companies using reverse mergers to come to market, Lucid is one of the few run by industry veterans who are experienced at launching electric cars.

Founded as Atieva in 2007, the company has about 2,000 employees and the cash infusion will go towards expanding its plant in Arizona, where it has begun building the Lucid Air, its $169,000 debut vehicle.

Lucid announced the production version of the Air last autumn, claiming it would be able to outperform Tesla’s highest-grade model on several fronts including on range, quarter-mile speed, battery recharge time and the basic efficiency in which it draws energy. Incumbent carmakers have all found it difficult to challenge Tesla’s battery technology and its software-first approach.

Klein said “Lucid’s superior and proven technology backed by clear demand for a sustainable EV make Lucid a highly attractive investment for Churchill Capital Corp IV shareholders, many of whom have an increased focus on sustainability”.

Klein, a former Citigroup dealmaker, is a serial Spac sponsor with seven listed vehicles under the Churchill Capital series.

During his career as a banker, he has been an adviser to Saudi Arabia’s PIF and the sovereign wealth fund has backed other Spac deals of his. It funded MultiPlan, a healthcare company that went public through a merger with Churchill Capital III.