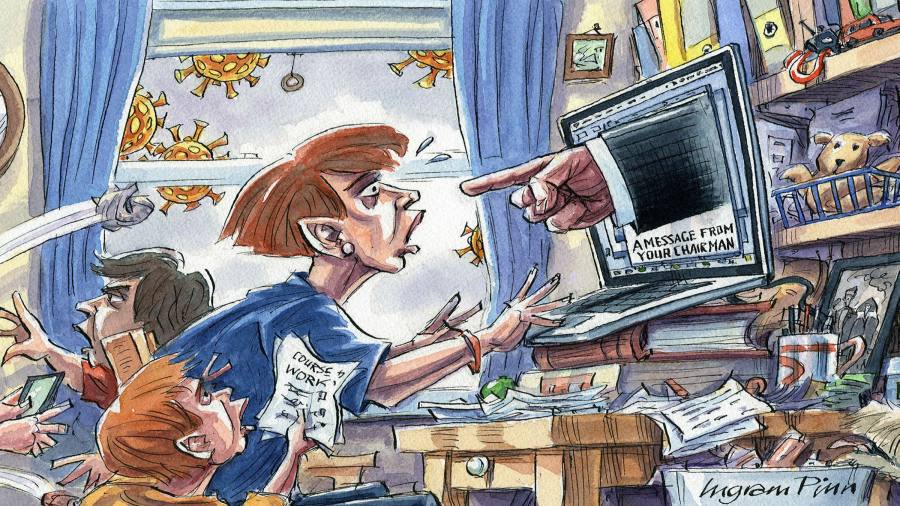 The writer is an FT contributing editor and co-founder of Now Teach, an organisation that helps experienced professionals retrain as teachers

When I was at primary school there was a particularly fierce dinner lady who saw it as her duty to make sure all children always ate everything on their plates. Whenever we tried to sneak some vinegary beetroot or a nasty bit of gristle past her she would send us back to finish it with the admonition: “Think of the starving children in Africa.”

Even when I was nine I did not find this argument terribly compelling. I wanted to tell her to give my beetroot and my cold, powder-mash potatoes to the starving children, but one look at her face assured me that this would be a bad call.

I thought of her last week when I read about Jeremy Mayhew, a senior member of the City of London’s governing body. He told staff at its Barbican arts centre to stop feeling sorry for themselves because at least they still had jobs. He would have made a fine dinner lady. As would Bill Michael, UK chairman of KPMG, who told his underlings on a video call that they should stop playing the victim card and cut the moaning about pandemic working conditions. This went down so monumentally badly that a few days later he was forced to quit.

In a way, each of these plain-speaking authority figures is on to something. Compared with intensive care nurses, KPMG partners — with their easy, comfortable jobs — have less than nothing to moan about. Staff at the Barbican have it far better than soon-to-be-jobless pilots at easyJet. Equally, well-fed infants in north-west London in the 1960s had no business complaining when in Biafra children were dying in huge numbers.

But none of that is the point. All three seem ignorant of basic human psychology, which is that we live our lives from within. If you’ve just had a godawful day in interminable Zoom meetings, your back is killing you from too long on the kitchen chair and you can no longer see any point in what you do, thinking of the jobless easyJet pilot is most unlikely to cheer you up for more than a second or two.

In any case, if we outlawed moaning on comparative grounds, then no one — not even the intensive care hospital doctor — would be allowed to get away with it. The doctor might be exhausted and traumatised, but Michael, Mayhew and the dinner lady would doubtless argue they should stop complaining because at least they have their liberty — which is more than can be said for princess Sheikha Latifa, last seen sending out SOS videos from the toilet of her prison villa in Dubai.

The dinner lady, who is probably dead by now as she seemed ancient in 1967, ought to be let off the hook for misunderstanding this. Not so the others. They have done something worse than fail to grasp the basic human right sometimes to feel hard done by — they have failed an even more basic test of how to manage anyone.

In contrast to the dinner lady, whose thankless job may have been alleviated by browbeating children, they are both in positions of power and should know better.

There is a golden rule of management that they both ignore: if you are above someone in the pecking order you must never tell them off for moaning. Not only will you fail to stop the moaning, the moaners will automatically double down and you will find yourself at the top of the list of the things they are moaning about.

Your reprimand will go down badly for two reasons. You earn more than they do, have more power and will be deemed to be having a better time — which disqualifies you from disparaging their frame of mind. Second, as their manager, you are meant to be motivating them — if everyone is moaning it is your job to find out why and do something about it.

In normal times both men might have got away with it. But to choose this particular moment to tell employees to buck up means they roundly deserve the flak they’ve got. Pretty much everyone is having a rotten time in lockdown #3 compared with the only thing that counts: the time we were having a year ago. The only comfort is that we can feel as sorry for ourselves as we like.

I sit all day in my bedroom trying to keep my mind on marking students’ work on Satchel One, the most hateful technology platform ever invented. Everything I love about teaching — ie being with students — has been taken away from me. Everything I hate about it — ie Satchel One — is with me all day long.

Obviously I know it’s worse for the kids. Obviously I’m grateful to have a safe job. But still I detest it and seek solace by texting fellow teachers and saying: “Assume you’re hating this as much as I am?”

What all managers should be doing right now is gritting their teeth and saying “thank you” to their whingeing employees and “well done”. Thank you has never been easier — it works on Zoom, Microsoft Teams, WhatsApp, text, FaceTime and phone — it even works on Satchel One. The other day I got a message from a senior colleague: “I miss our chats.” It was less than a full-on thank you, but it did the trick and stopped my moans — at least for an hour or two.