For years Matteo Salvini was their “Capitano”, a fearless hero who antagonised Brussels and toured Italy in a T-shirt emblazoned with the slogan “no more euro”.

Now the one-time poster child of anti-euro populism has enthusiastically embraced a new Italian government led by Mario Draghi, the former central banker credited with saving the single currency Salvini once vowed the country would quit.

“They can tell me all the rubbish they want,” said Robertino Zancan, a 56-year-old goldsmith from Vicenza. “But the truth is that they have lost my trust, and that of many other people who have believed in Il Capitano over the years.”

Rugerro, a 37-year-old lawyer from Palermo who declined to give his second name, described himself as left “speechless” by the League’s pro-European transformation.

“He will certainly no longer have my vote. [The League] have gone from saying that Draghi closing off liquidity to the Greek banks was a terrorist act to supporting his majority”, he said, referring to the prime minister’s actions as president of the European Central Bank during Greece’s sovereign debt crisis.

Other disillusioned former Salvini fans took to social media to voice their fury. “Aren’t you ashamed to show yourselves?!?,” wrote one, calling the party “spineless men . . . traitors of the Italian people!” Another wrote: “From anti-Europeans to convinced pro-Europeans! At this point I think my vote is no longer necessary!”

Yet while the anger among the League’s anti-euro voters is palpable, analysts suggest that Salvini’s decision to back Draghi is in fact a pragmatic and calculated response to Italy’s changing political mood.

Indeed, recent polling suggests that over 80 per cent of League voters endorse his decision to support the new government. 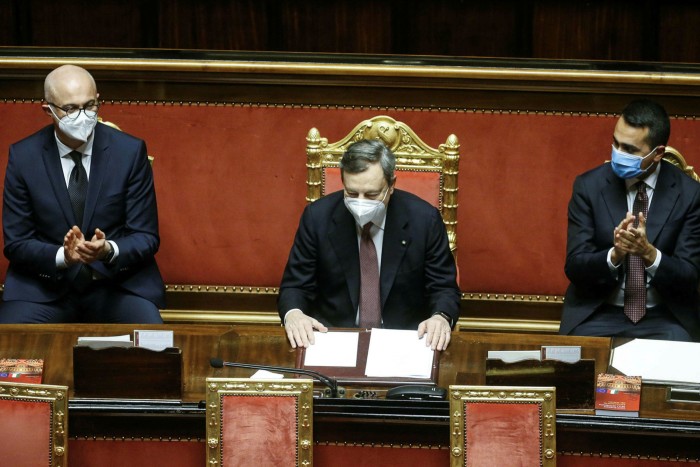 The northern Italian entrepreneurs who form the party’s historic base are far more focused on improving the economy and cutting taxes, and were never much enamoured of Salvini’s anti-euro agitation. If he had attempted to resist the Draghi government he would have risked internal revolt from powerful regional party barons in the north, as well as the League’s sizeable pro-business wing.

“[Salvini] will lose some voters, that is certain, but there is a significant amount of support for the new government among League voters,” said Lorenzo Pregliasco, a polling expert at YouTrend.

“There is a vocal group of anti-euro League supporters on social media, but I don’t think they represent that much of the broader Italian electorate, or League voters”.

Since the start of last year Salvini has seen his national poll ratings decline from over 30 per cent to around 20 per cent today. At the same time Giorgia Meloni’s Brothers of Italy, which has its roots in the country’s post-fascist politics, has attracted a significant amount of support away from the League, taking her party from the low single-digit in the polls to the mid-teens.

Meloni’s was the only large Italian political party not to support the Draghi government, which may enable it to become a focal point for disillusioned rightwing voters. Joe Formaggio, a regional councillor for the Brothers of Italy in the Veneto region, is excited at the prospect of taking further support from Salvini.

“Quite frankly, it stinks,” Formaggio said. “I would have expected [Silvio] Berlusconi to support Draghi, but I certainly wouldn’t have expected this from Salvini and the League. Without a second thought they have abandoned their flagship ideals along with the hardcore of their voters.”

Pregliasco, however, points out that there may nevertheless be scope for Salvini to grow support among moderate centre-right voters. His polling shows that only around 15 per cent of League supporters define themselves as strongly Eurosceptic. And a sizeable number of these have in any case already switched over to Meloni, who herself is not anti-euro.

Among those who have already moved from voting for the League in the 2019 European elections to now supporting the Brothers of Italy, 62 per cent define themselves as Eurosceptic according to YouTrend.

Salvini has not entirely abandoned his previous anti-euro persona. The day before Draghi was voted in as prime minister in the Italian senate Salvini, responding to a question about the permanence of the euro, said: “Only death is irreversible”.

But the following day later Draghi gave what appeared to be a clear rebuff to the League leader in his first speech as premier. “Supporting this government means sharing the irreversibility of the choice of the euro,” he said.

Pregliasco said that the pandemic “has moved general public opinion in Italy to be more favourable towards EU”. He added: “A wide part of electorate want expert and competent leadership.”

While Salvini’s hardline Eurosceptic former fans will despair, many other League supporters, such as Oscar Panseri, who runs a business in the party stronghold of Pontida in Lombardy, are pleased by his pragmatism.

“The natural inclination of an entrepreneur is to do business,” Panseri said. “There is an urgent need for realpolitik right now. the League’s choice is the right one . . . They couldn’t pass up this opportunity to breathe life into the economy with Draghi”.