Vlad Tenev, the chief executive of Robinhood, apologised for his company’s role in the furore over trading in GameStop shares, as the online trading platform bore the brunt of a political grilling in Washington.

“I’m sorry for what happened. I apologise,” Tenev said during an afternoon of questioning from Democratic and Republican lawmakers on the House Financial Services Committee.

“And I’m not going to say that Robinhood did everything perfect and that we haven’t made mistakes in the past. But what I commit to is making sure that we improve from this, we learn from it, and we don’t make the same mistakes in the future,” Tenev said.

The online trading platform has come under fierce scrutiny after it blocked trading in GameStop, the video game retailer, following a sharp rise in its shares last month.

For the first time on Thursday, Tenev admitted Robinhood lacked sufficient cash when it limited transactions in “meme” stocks, saying it had not been in a position to meet a $3bn deposit requirement from its equities clearinghouse on January 28 without curbing customer trading.

“The Robinhood Securities team had to work with our relevant clearinghouses to adjust the risk profile of the trading day in order to meet our collateral requirements,” he said.

Tenev’s admission appeared to contradict earlier explanations he had provided for the prohibitions. Asked about the clearinghouse’s ability to step in to liquidate Robinhood customers’ positions if it had not been able to eventually meet the capital call, he said “it would not have been a good situation for the firm or the customers”.

In an interview on CNBC last month, Tenev said of the trading curbs: “There was no liquidity problem, and to be clear, this was done preemptively.”

Tenev testified virtually at Thursday’s hearing alongside Ken Griffin, chief executive of Citadel Securities, the market maker that pays Robinhood to handle its trades; Keith Gill, a day trader known as Roaring Kitty who was a vocal advocate of GameStop shares; and Gabe Plotkin, whose hedge fund Melvin Capital lost billions betting against stocks including GameStop.

During the exchanges with lawmakers, Griffin adamantly denied there was any co-ordination between Citadel and Robinhood when the trading app limited trading in GameStop and other heavily shorted stocks.

When asked whether anyone in his company spoke to Robinhood about restricting users’ ability to buy shares — a possibility that has given rise to online conspiracy theories — the Citadel chief responded: “Let me be perfectly clear, absolutely not.” 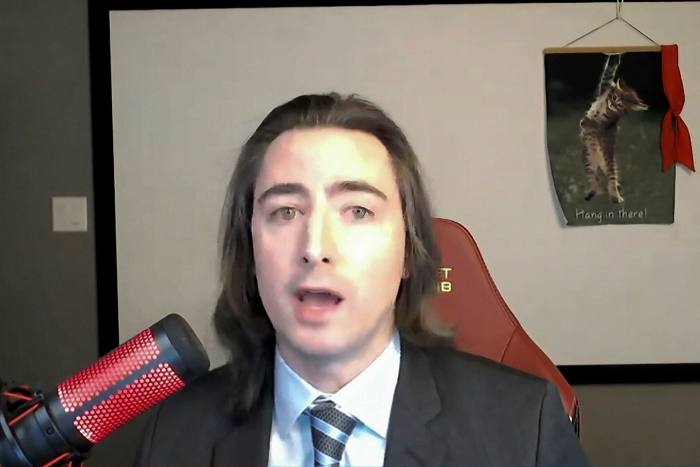 Keith Gill, known on social media as Roaring Kitty, had been one of the most prominent advocates of buying GameStop © AP 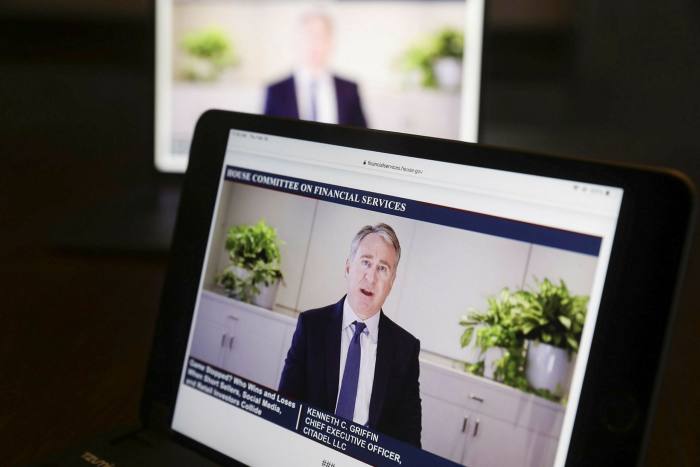 During the hearing, the biggest policy questions surrounded the practice of payment for order flow, under which market makers such as Citadel Securities pay retail brokers to execute their customers’ trades, and the need for greater transparency and speed in the settlement of equities trades.

Some Democrats have been calling for tighter regulation of the financial sector in response to the GameStop affair. As she opened the hearing, Maxine Waters, the chair of the committee and veteran California Democrat, said “many Americans feel that the system is stacked against them and, no matter what, Wall Street always wins”.

But there were signs that some Republicans were resisting a tougher regulatory crackdown. “Instead of shutting the American public out through new regulations, new forms of taxation, or so-called protections, let’s use this opportunity instead to side with them,” said Patrick McHenry, the top Republican on the panel. “Americans are far more sophisticated, informed, and capable than folks in DC give them credit for.”

During the hearing, Tenev also apologised to the family of Alex Kearns, the 20-year-old man who died by suicide last summer after believing that he had lost more than $750,000 trading options on Robinhood, in one of the most troubling signs of the dark side of the democratising access to financial markets.

“I’m sorry to the family of Mr Kearns for their loss,” Tenev said. “The passing of Mr Kearns was deeply troubling to me and to the entire company.”

Emanuel Cleaver, Democratic representative from Missouri, criticised the platform for its delayed response to Kearns, who sent emails to Robinhood in the wake of his losses, but did not receive a reply until hours later. Robinhood said that it made numerous changes to the platform in the wake of the suicide. “We vowed to take a series of very aggressive steps to make our options products safer for our customers,” Tenev said.

Tenev declined to say whether Robinhood customers had made money, in aggregate, from trading GameStop, and he also struggled to answer when one committee member picked up on his promise that the trading platform would learn from its mistakes.

When asked what mistakes was he admitting to, he replied: “I admit to always improving.”

GameStop Hearing Was No Fun for Free-Trading Business Model