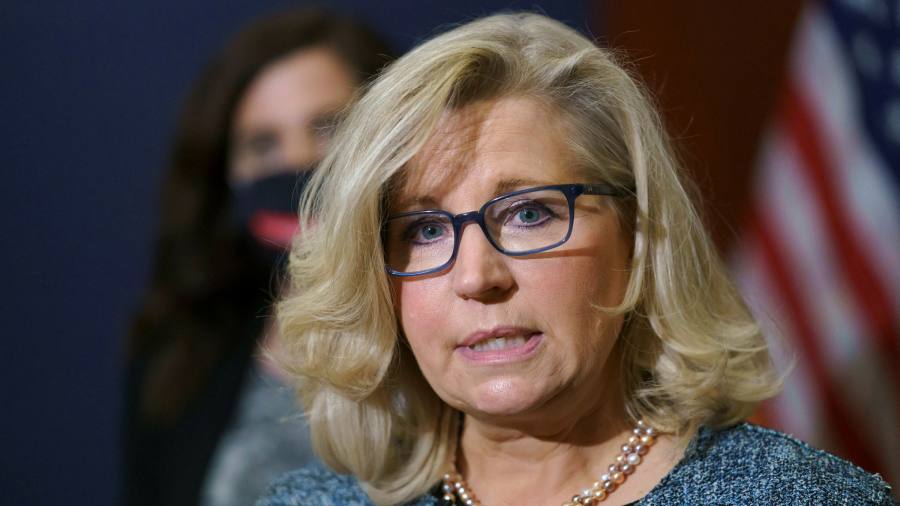 Donald Trump no longer has the bully pulpit of the White House or access to his Twitter account, but he still issues regular missives through his “Save America” political action committee.

Liz Cheney, the number-three Republican in the US House of Representatives, responded within an hour.

“The 2020 presidential election was not stolen,” she said on Twitter. “Anyone who claims it was is spreading THE BIG LIE, turning their back on the rule of law, and poisoning our democratic system.”

The bitter back and forth six months after the election was the latest skirmish in a political party at war over Trump’s defeat, underscoring his enduring influence on the Republican party.

“Those who hoped the fever would break after November 3, or after January 6, or after January 20, so far have been wrong,” said Bill Kristol, the founder of the conservative Weekly Standard magazine, referring to the date of the election, the day that crowds of Trump supporters stormed the US Capitol and the day Joe Biden took office as US president.

Trump’s shadow looms across the country. Mitt Romney, the US senator from Utah who voted to convict the former president in both of his impeachment trials, was booed at a gathering of Utah Republicans last week. In Arizona, state Republican party officials continue to insist on recounting ballots despite multiple audits showing Biden beat Trump there.

Cheney’s stance is likely to cost her a leadership position on Capitol Hill. After she voted to impeach the then-president over his role in the January 6 siege, she survived a confidence vote among House Republicans in early February.

But fellow caucus members now expect to hold a second confidence vote as soon as next week — and effectuate a different result.

“She is toast this time,” said one Republican congressional aide. “It has just reached a breaking point.”

Cheney is a staunch conservative known for hawkish foreign policy views and a daughter of former US vice-president Dick Cheney. Since 2017 she has served as the sole representative of Wyoming, a thinly populated western US state with an economy dependent on coal mining, oil and gas drilling and tourism.

She has in recent months fallen out with Kevin McCarthy, the most senior House Republican, over her repeated criticism of Trump.

McCarthy has sought to unite the warring factions of the party ahead of next year’s midterms, when Republicans will try to regain control of both chambers of Congress. Yet McCarthy has made several public overtures to align himself with Trump, including visiting the former president at his Mar-a-Lago resort in Palm Beach, Florida, shortly after Biden’s swearing-in.

On Tuesday McCarthy signalled that he was in favour of firing his colleague from the party leadership.

“I have heard from members concerned about her ability to carry out the job as conference chair, to carry out the message,” McCarthy told Fox News, the rightwing cable television channel. “We all need to be working as one if we are able to win the majority.”

Jeremy Adler, Cheney’s spokesman, responded: “This is about whether the Republican party is going to perpetuate lies about the 2020 election and attempt to whitewash what happened on January 6. Liz will not do that. That is the issue.”

The Axios website later reported that McCarthy was recorded off-camera on a “hot microphone” telling Fox News host Steve Doocy that he had “lost confidence” in Cheney.

“I think she has got real problems,” McCarthy said, according to Axios. “I have had it with her.”

Video: Where does the Republican party go after Trump?

Cheney has defenders in both Washington and Wyoming. The congresswoman raised a sizeable $1.54m in the first quarter of this year, according to the latest Federal Election Commission filings — her largest quarterly haul since her first congressional campaign, signalling that a segment of Republican donors are ready to move on from the Trump era.

“The GOP is in this crossroads and all of us see it and feel it,” said Amy Edmonds, a Republican former Wyoming state legislator who worked for Cheney in the past. “Are we going to build the next year on lies and not face the truth? Or are we going to tell the truth and actually get on to the important policy issues?”

“Unfortunately it looks as though Kevin McCarthy has decided that he wants to continue to feed lies to our voters, and I fear that we are going to be in the electoral wilderness for four years if that happens,” she added.

Mark Gordon, Wyoming’s Republican governor, told the Financial Times: “Liz has always voted her conscience and I respect her for that.” His spokesman said he believed having Cheney in the Republican leadership was an asset for Wyoming.

Cheney will probably face an uphill path to next year’s midterm elections. The congresswoman will first need to defeat at least four challengers in the Republican primary and stave off attacks from the party in her home state, which censured her over her impeachment vote.

Frank Luntz, the veteran Republican pollster, said Cheney’s case illustrated the fissures within the wider party, both on Capitol Hill and among voters.

“That is one of the key dividing lines,” Luntz said. “Do you support Donald Trump’s baseless claims? If you don’t, there are some people within the Republican party who consider you a traitor.”

Are CEOs living up to the pledges they made after George Floyd’s murder?