People living in areas hit hardest by the pandemic are being vaccinated at a slower rate than the rest of the US population, according to a Financial Times analysis of data from five major metropolitan areas, underscoring deep-seated racial disparities in access to inoculations.

Government health officials are alarmed by lower vaccination rates in neighbourhoods where people of colour tend to live, especially African Americans, and the FT’s analysis suggests that this is among the biggest factors in whether someone has received a jab.

That is especially true in Chicago, where a map illustrating vaccine distribution by zip code underscores historic segregation in the city, which has more resources — from grocery stores to parks — in the predominantly white North Side and downtown, and fewer in majority-black neighbourhoods to the south and west. 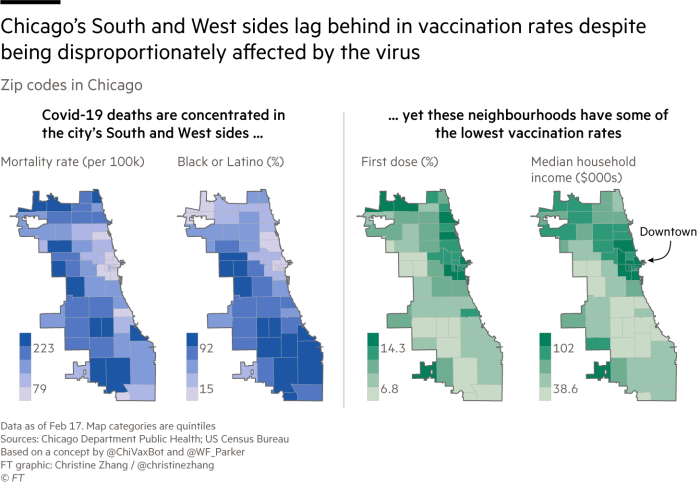 The vaccination disparity has persisted several weeks after the city has expanded the group of people eligible for a jab to include frontline essential workers and people aged 65 and over.

For instance, the zip code containing Streeterville, a neighbourhood that is home to a Gucci boutique and Chicago’s Museum of Contemporary Art, has one of the highest vaccination rates in the city. The area is more than 70 per cent white, with a median household income of almost $107,000. Just 40 per 100,000 residents have died of Covid-19, while about 24 per cent of them have received a first dose of the vaccine.

Sixteen miles south, the zip code containing Roseland is more than 90 per cent black with a median household income of $41,000. Covid-19 has killed 279 people out of every 100,000; just 6 per cent of residents have received a first dose of the vaccine.

“There’s that old saying: every map of Chicago is a map of racial segregation,” said Chicago demographer Rob Paral. “The biggest issue is that access to resources in the US, and certainly in Chicago, continues to be determined by race.”

The situation in Chicago is replicated in other urban areas in the US, according to the FT’s analysis of data from localities that release more granular vaccination statistics by geography.

In Washington, DC, residents of the majority-white, wealthy north-west wards have received the most jabs by far, while in majority-black wards, which have seen a disproportionately high share of cases and deaths, vaccinations continue to lag. 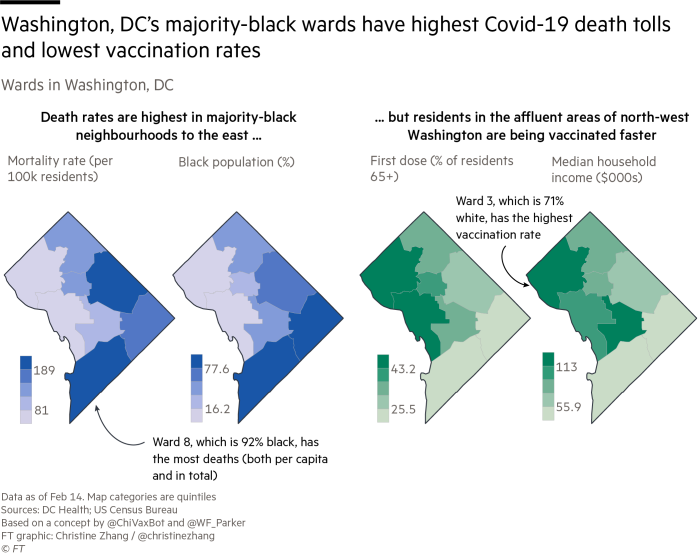 In neighbouring Baltimore, many of the zip codes with the highest vaccination rates are located in the wealthy “white L” communities in the north and south. Across the country in Washington state, zip codes in north-east Seattle have some of the highest vaccination rates in King County. Meanwhile, cities in the southern part of the county, home to more non-white and immigrant communities, have fallen behind in inoculations while being disproportionately affected by the virus. 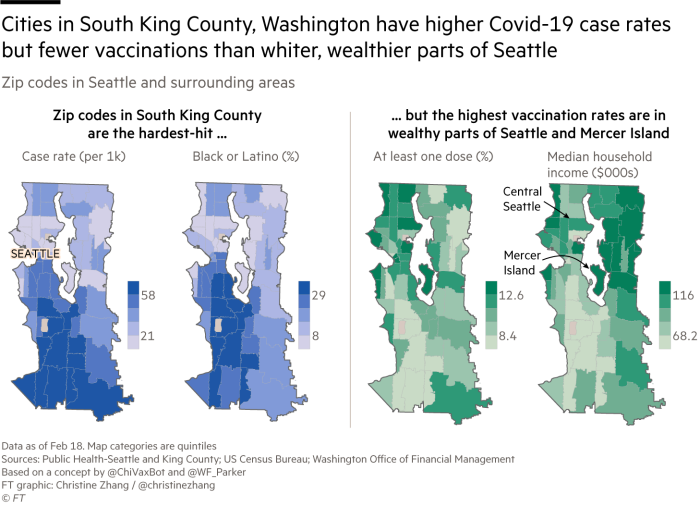 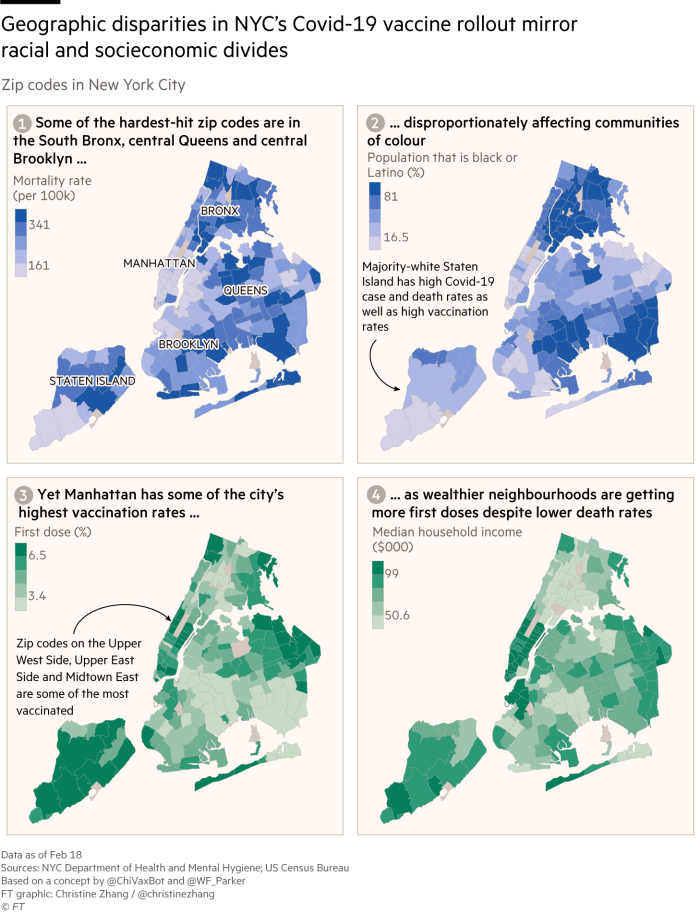 Medical groups say that requiring vaccine appointments to be made on websites or apps, and allocating slots to those who snap them up first, something that Chicago does, can exacerbate inequities.

A person who lacks reliable internet access and works long hours “doesn’t have time to hit refresh every hour” to secure a vaccine, said Ali Khan, an executive medical director at Oak Street Health, a public company that operates 21 clinics for low-income seniors in the Midwestern city.

Oak Street has a waiting list with more than 15,000 names, added through multiple sign-up methods. If they had not actively reached out to people who had not signed up, they would be vaccinating “solely white and Asian people”, Khan added. Surveys show black and Latino adults are more wary about getting the vaccine than whites. Some public health experts attribute this to scepticism of the medical establishment stemming from the four-decade Tuskegee scandal, when US health officials told black men in Alabama starting in the 1930s that their syphilis was being treated, when in fact it was not.

Susan Lopez, a bilingual doctor at a Chicago hospital, said several Spanish-speaking Covid-19 patients had told her they delayed seeking medical treatment because they feared the US immigration authorities.

The challenge is to “get the demand and the supply where it needs to be most, while we continue to make sure that everybody who is eligible has access”, said Helene Gayle, who heads the Chicago Community Trust and co-chaired the National Academies framework for vaccine distribution.

‘Pour the water where the fire is’

Gayle and others have called for residents from certain zip codes to be prioritised. The US Centers for Disease Control and Prevention, or CDC, released recommendations for priority groups in December, but the rollout has been left to individual states that are increasingly making and modifying their own rules.

Washington, DC’s health department has opened up vaccine appointments a day earlier for residents 65 and older who live in certain zip codes. In Chicago, officials have targeted 15 high-need neighbourhoods for outreach and mass vaccination drives. In one such neighbourhood, more than 1,500 residents received a first dose in one weekend.

William Parker, a University of Chicago medical professor, said that if a South Side zip code had five times the death rate than one on the North Side, it should receive five times the vaccine supply.

“It’s not just about the absolute numbers. You could rack up your numbers in Chicago real fast by focusing on the North Side. But that does nothing in terms of mitigating disparities,” he said.

“We need to pour the water where the fire is burning.”