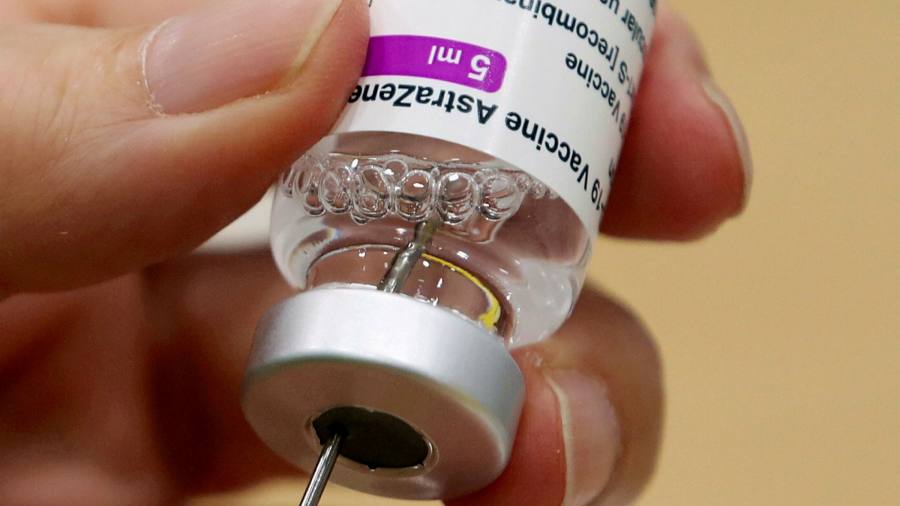 Oxford university has paused a small clinical trial in children of the Covid-19 vaccine developed with AstraZeneca, ahead of a new risk assessments this week by regulators investigating possible links between the jab and rare but potentially fatal blood disorders in adults.

The suspension of the trial, which was running tests in 300 volunteers aged 6 to 17, is the latest setback for a product seen as a mainstay of vaccination programmes in the UK and around the world.

The university said it had decided to suspend the trial ahead of the release of “additional information” from the Medicines and Healthcare products Regulatory Agency, the UK regulator, following its review of cases of thrombosis (blood clotting) and thrombocytopenia (low platelet count) in some adults. It said there were “no safety concerns in the paediatric study”.

The MHRA and the European Medicines Agency are both expected to issue new risk assessments this week, following incidents of rare blood disorders in people around Europe who have had the Oxford/AstraZeneca jab.

They may suggest restricting use of the AstraZeneca jab in younger people who are more susceptible to abnormal blood clotting and much less likely to suffer severe Covid-19.

Both regulators have previously insisted there was no conclusive link between the jab and the cases but many European countries have placed restrictions on the use of the vaccination in younger adults and some have suspended its use.

Speaking before Oxford suspended the trial, UK vaccine minister Nadhim Zahawi sought to reassure people, insisting the MHRA would continue to monitor any adverse side effects of the Oxford/AstraZeneca vaccine. “The regulators absolutely look at, very closely, any adverse incidents.”

Speaking on Tuesday, UK prime minister Boris Johnson urged the public to continue to come forward to receive their Covid-19 vaccines. “It is very important to stress that the best thing of all is to vaccinate our population, get everybody out getting the jab. That is the key thing.”

The Oxford-AstraZeneca product is the most widely-used jab in the UK’s vaccination programme, currently one of the most successful in the world. Any restrictions on its use could further affect a rollout that newly-released government documents revealed may slow by as much as a fifth in coming months.

Guidance from the Cabinet Office to the government’s Scientific Advisory Group for Emergencies (Sage) released on Monday showed that the UK vaccination rate was expected to slow to 2.7m doses per week until the end of July from the previous 3.2m doses anticipated for that period. But a back-up scenario suggested that number could fall as low as 2.5m doses per week.

Subsequent modelling by scientists of those numbers for Sage found that this squeeze on supplies could result in a significantly larger resurgence of hospitalisations and deaths later in the summer, after lockdown restrictions have been lifted. They warned that a substantial third wave of Covid-19 cases was “highly likely” as a result.

Asked about the slowing of the vaccine rollout, the prime minister’s spokesperson refused to provide additional “details around supplies and deliveries” of the vaccines, citing commercial confidentiality and security considerations, but insisted the UK was on track to offer a vaccine to all adults by the end of July as planned.

A person close to the government’s vaccination programme suggested that the scaled-back rollout scenarios were a cautious response to uncertainties such as the dispute with the EU over supplies. Restrictions on imports of the AstraZeneca vaccine from India are another source of uncertainty.

The scientific modelling team from Warwick university — one of three academic groups feeding into the projections for Sage — found that even a slightly slower vaccine rollout leads to a substantially larger third wave of the epidemic, as less population immunity will have developed when the final lockdown restrictions are removed.

'Buzzy' films will grab audiences in theaters and at home, 'Godzilla vs. Kong' producer says