Oil at $75 a Barrel by Summer? Goldman Analyst’s Forecast Is Bullish for Energy Stocks.

Oil at $75 a Barrel by Summer? Goldman Analyst’s Forecast Is Bullish for Energy Stocks. 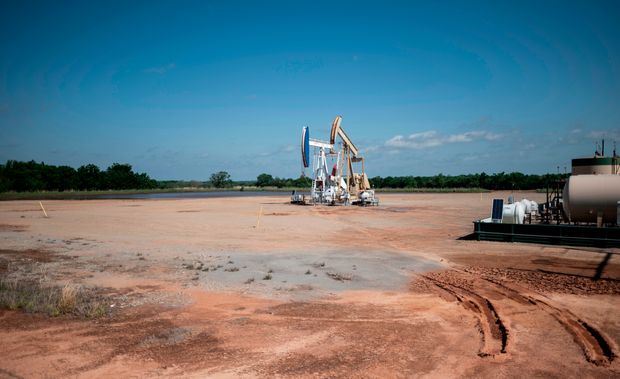 Goldman Sachs raised its estimates for oil prices on Monday, projecting that Brent crude can rise to $75 a barrel in the third quarter on increasing demand and a slow rebound in supply. That price — which is well above the projections of most other analysts — would be enormously bullish for oil stocks.

Oil prices have risen more than 20% this year. Last week’s storms in the South forced some production off-line and caused prices to rise, but they sunk back later in the week. On Monday, Brent crude futures were up 2.5%, to $64.45 a barrel and West Texas Intermediate futures were up 2.9%, to $60.98. Oil stocks were rising, with producer Pioneer Natural Resources (ticker: PXD) up 4.5%.

Goldman analyst Damien Courvalin previously had expected Brent to rise to $65 by the third quarter, but now sees $75 as likely.

At those prices, oil stocks could see big gains. Because of the high initial costs to produce oil from a well, many U.S. companies don’t break even on their investment until oil prices are over $45 or $50. But once prices hit those levels, a much higher percentage of each dollar ends up flowing to the bottom line.

For some price-sensitive stocks, each $1 they get from oil prices can lift earnings by more than 10%, according to analyst Paul Sankey of Sankey Research. Among the companies that get above-average benefits from high prices are Marathon Oil (MRO) and Occidental Petroleum (OXY).

Oil stocks have trailed the market for a decade, but commodities are back in favor and oil has become attractive because it’s “a lagging real asset that benefits from a stimulus driven recovery and has demonstrated an unmatched ability to hedge against inflation shocks,” Courvain wrote.

Based on futures trading data, money managers and traders are more bullish on oil than they have been at almost any time in the past year, according to Citigroup analyst Ed Morse.

Aside from jet fuel, demand for oil products is rising quickly as economies around the world rebound from their pandemic lows. While oil producers will ramp up production to take advantage of the price increases, supply probably won’t catch up with demand for a while, resulting in a “tight oil market this summer.”

“While we believe that OPEC+, Iran and shale supplies can materially increase through the second half of 2021, all these are likely to remain highly inelastic in coming months to even higher oil prices,” Courvalin wrote. “In particular, the recovery of Iranian exports is likely to take months and would further be accommodated within our assumed aggressive ramp-up in OPEC+ output this summer.”

Analysts had come into the year anticipating a slow recovery, with oil prices hovering somewhere in the $50s or perhaps reaching the $60s. But the price recovery has been faster than expected — in part because of the success of vaccines in containing Covid-19 in some parts of the world and in part because of the decision by many producers to keep production low even as prices rise. In the past, the cure for high prices has been high prices — producers simply ramp up production and the increasing supply causes prices to drop.

These days, however, companies have been holding back on adding new wells, because investors have been demanding that they keep capital expenses low and focus on growing their dividends. OPEC has also been remarkably cautious in restoring production after reducing collective output by 9.7 million barrels per day last year, or about 10% of total global production. Saudi Arabia unilaterally took another 1 million barrels out of production early this year, giving the market an even larger tailwind.

Write to Avi Salzman at avi.salzman@barrons.com

Most student loan borrowers won't get a tax break this year