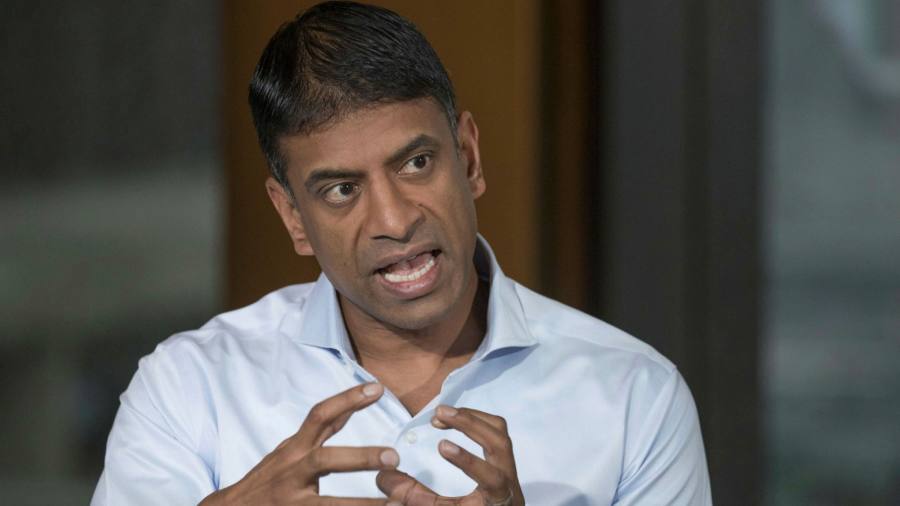 Novartis is hoping to cement an early lead in a potential $10bn market for a new type of cancer treatment, called novel radioligand therapy, after positive results from its trials.

Vas Narasimhan, Novartis’s chief executive, said the pharmaceutical company has large-scale manufacturing capacity and relationships with hospitals, which will have to invest to adapt to deliver the treatments, that would lead to a “virtuous cycle” where competitors find it harder to displace the company’s dominance.

“We believe it could be, in the coming decade, a $10bn plus market,” he told the Financial Times. “When you look at the cancers it could address, you certainly have the opportunity to go much, much larger.”

Originally discovered by physicists from CERN, the European organisation for nuclear research, radioligand therapy delivers radiation to tumours through an infusion, which is more targeted than the blunt tool of radiotherapy. Novartis bought the scientists’ company, Advanced Accelerator Applications, for $3.9bn in 2018.

Narasimhan said the trial results, published last month, were “pretty remarkable”. In a phase 3 trial for treating prostate cancer, Novartis found it reduced the risk of death by 38 per cent, compared with the standard care.

The company plans to submit the treatment for regulatory approval in the US and the EU in the second half of the year. It will expand trials into earlier treatments for prostate cancer and is examining its use against other cancers, including in the lung and brain.

But the therapy will require complicated infrastructure, with just-in-time delivery for the radioactive treatment and patients isolated while they are receiving it.

Narasimhan said he thought there could be tens of thousands or hundreds of thousands of prostate cancer patients, encouraging clinics to expand into the area.

“We think prostate cancer will be the unlock to really enable us to get a much broader interest,” he said.

Narasimhan has increased Novartis’s focus on innovative medicines, which include the transformative but also tricky-to-deliver Kymriah, a cancer treatment, and Zolgensma, a gene therapy for the debilitating genetic disease spinal muscular atrophy that is the world’s most expensive drug.

Soaring sales of blockbuster drugs helped Novartis beat expectations on earnings and revenue in the second quarter. Sales of Entresto, for heart failure, rose 46 per cent on a constant currency basis, while Cosentyx, which treats conditions including arthritis and psoriasis, increased 21 per cent.

The Swiss pharmaceutical company reported net sales of $13bn, up 14 per cent year on year, and higher than the consensus forecast for $12.5bn. Core earnings per share were $1.66, above the average analyst estimate for $1.52. Net income was $2.9bn.

Oncology drug revenue grew 7 per cent on a constant currency basis, as some health systems began to approach pre-pandemic levels of cancer diagnosis, which had been disrupted by the focus on treating Covid-19 patients.

Novartis reaffirmed its full-year 2021 guidance for net sales to grow in the low to mid single digits and core operating income to increase in the mid single digits. The forecast assumes coronavirus restrictions will be eased in the second half.

“I think health ministers are more and more cognisant of the fact that, in the end, there were more deaths from cardiovascular disease in many countries than Covid, and then, in cancer, deaths approaching the deaths from Covid,” Narasimhan said.

But he warned that the rebound in treatment could reverse because of the “ups and downs of the Delta variant”, which is spurring an increase in hospital admissions in many countries.