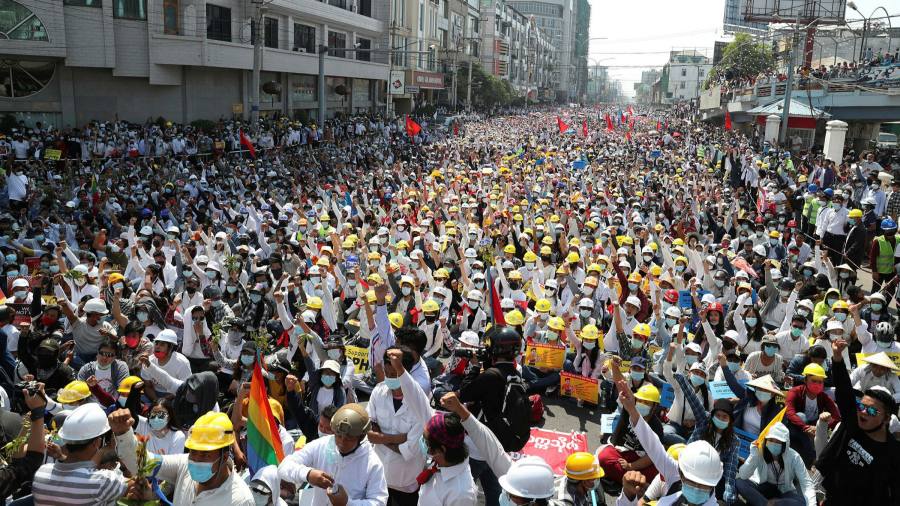 Throngs of protesters joined a general strike against Myanmar’s military junta on Monday, closing businesses and flooding on to streets in what organisers said was the biggest day of defiance since the coup.

Large crowds brushed aside a growing threat of violence by the regime to assemble in Yangon, Naypyidaw, Mandalay and cities across the country, where security forces shot dead two protesters and injured several others on Saturday.

Banks, supermarkets, local vendors and most other businesses were shut in Yangon, the country’s biggest city.

The protest was labelled “22222” or “five twos” revolution in reference to the date 22/2/2021. The name was also meant to evoke the 8888 uprising, a popular revolt against the military regime of the time that began on August 8 1988 and was later crushed.

The protests came as the military government of General Min Aung Hlaing stepped up its verbal attacks on protesters and the western democracies that have condemned the coup. The army chief seized power from Aung San Suu Kyi’s government on February 1 and the junta imprisoned the former leader and hundreds of officials from her National League for Democracy party.

An announcement by the military regime’s “information team” published in the Global New Light of Myanmar, a government mouthpiece, and broadcast on military-run MRTV blamed the weekend’s fatal clashes on “riotous protesters” and “notorious ex-criminals and their gangs”. The junta claimed the protesters used knives, stones, catapults and other weapons against security forces.

“It is found that the protesters have raised their incitement towards riot and anarchy mob on the day of 22 February,” the notice said. “Protesters are now inciting the people, especially emotional teenagers and youths, to a confrontation path where they will suffer the loss of life.”

A foreign ministry statement warned the embassies of “some foreign countries and the United Nations” to watch their words.

“The ministry views that some statements and remarks made by some embassies in Yangon and foreign countries are tantamount to flagrant interference in internal affairs of Myanmar,” it said.

EU foreign ministers said they were “ready to adopt restrictive measures targeting those directly responsible for the coup”.

The statement did not say which officials might be targeted and generally the EU has been more cautious than other western powers in imposing sanctions on the Myanmar military. The US unveiled measures against military leaders and froze $1bn in government assets held in the country.

The EU stopped short of imposing sanctions on Min Aung Hlaing over the 2017 Rohingya crackdown.

The general strike had a more sombre mood compared with the festive and irreverent atmosphere of some previous protests. Crowds held up NLD flags or pictures of Aung San Suu Kyi and some wore helmets as a precaution after the shootings in Mandalay.

Only a few tea shops and other small businesses were open. Major roads and highways were blocked by the junta on Monday morning but civilians removed them.