Myanmar’s military junta has deployed a notorious infantry unit in Mandalay, where two people were shot dead on Saturday, in what campaigners described as a worrying escalation of the crackdown on peaceful protests against the coup.

Police and soldiers fired live rounds into a crowd of protesting dockyard workers in the country’s second city, killing two and injuring several others, according to local media.

Protesters were undeterred by the escalation of violence, with crowds gathering in Mandalay and Yangon, the commercial centre, on Sunday. The first known casualty of the coup, Mya Thwe Thwe Khine, passed away on Friday after being shot in Naypyidaw, the capital, earlier this month, according to local media.

Witnesses in Mandalay on Saturday reported seeing soldiers from the 33rd Light Infantry Division, which led the deadly campaign against Rohingya Muslims in western Rakhine state in 2017. Human rights groups working to piece together witness reports and videos from Mandalay said that it was not yet clear whether police or soldiers had delivered the fatal shots.

Rights watchdogs voiced alarm at the junta’s deployment of a unit blamed for atrocities against civilians, including a massacre of 10 Rohingya men. The US Treasury imposed sanctions against Aung Aung, the division’s commander, in 2019.

“It’s really worrying to see a military deployment, particularly of the 33rd Light Infantry Division, which previously committed crimes in Rakhine state and was involved in rounding up Rohingyas in 2017,” said Manny Maung, a Myanmar researcher for Human Rights Watch. “It’s really important that these incidents be investigated and that they face the full force of the law.” 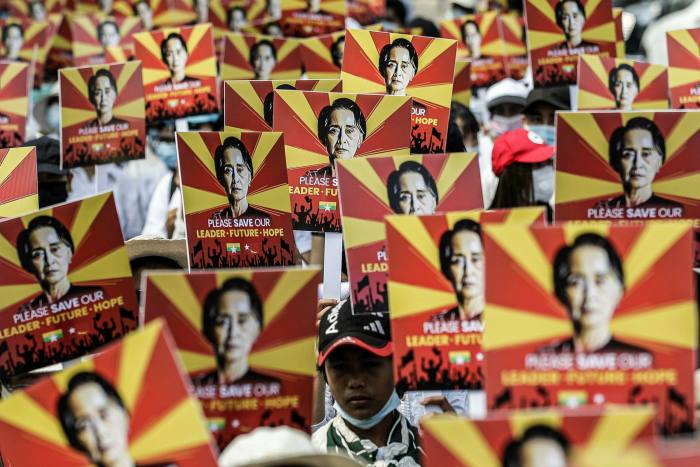 Protesters outside the Chinese embassy in Yangon on Sunday. At least three people have been shot and killed by security forces since the February 1 coup © Lynn Bo Bo/EPA-EFE/Shutterstock

Facebook, which was widely criticised for its failure to block online incitement and hate speech in Myanmar before and during the Rohingya crisis, said on Sunday that it would remove the military’s main propaganda page.

“In line with our global policies, we’ve removed the Tatmadaw True News Information Team page from Facebook for repeated violations of our community standards prohibiting incitement of violence and coordinating harm,” the social media company said.

Dominic Raab, UK foreign secretary, condemned the shootings in Mandalay as “beyond the pale”. Ned Price, a US state department spokesman, voiced concern over the deaths and the junta’s detention and harassment of protesters.

According to the Assistance Association for Political Prisoners, 569 people have been arrested, charged or sentenced since the coup. The arrests have extended beyond the formerly governing National League for Democracy party to include regime critics and celebrities. Early on Sunday, police arrested Lu Min, a popular actor who took part in protests.

Bo Kyi, the AAPP’s joint secretary, told the Financial Times that most of those arrested were being charged under Section 505(b) of Myanmar’s penal code, a catchall provision used by past governments to silence critics, as well the Natural Disaster Management Law for violating coronavirus-related restrictions.

Aung San Suu Kyi has been charged with violating the latter law as well as Myanmar’s export-import law after her guards were found with walkie talkies, the group said.

“Lawyers are being systematically denied their rights to visitation, or even finding out about the date of the court hearing after it happened,” Bo Kyi said. “The military is trying to operate the judiciary just like the coup, illegitimately.”

One of those arrested, Win Htein, 79, an NLD elder statesman, appeared in court via video link on Friday without access to his lawyer, the AAPP said. According to his family, he was transferred to jail.

“We are very worried for his health and about daily activities like showering,” his daughter Chit Suu Win Htein told the FT. “He has underlying health conditions, and I’m saddened to hear the news that they put him in prison.”