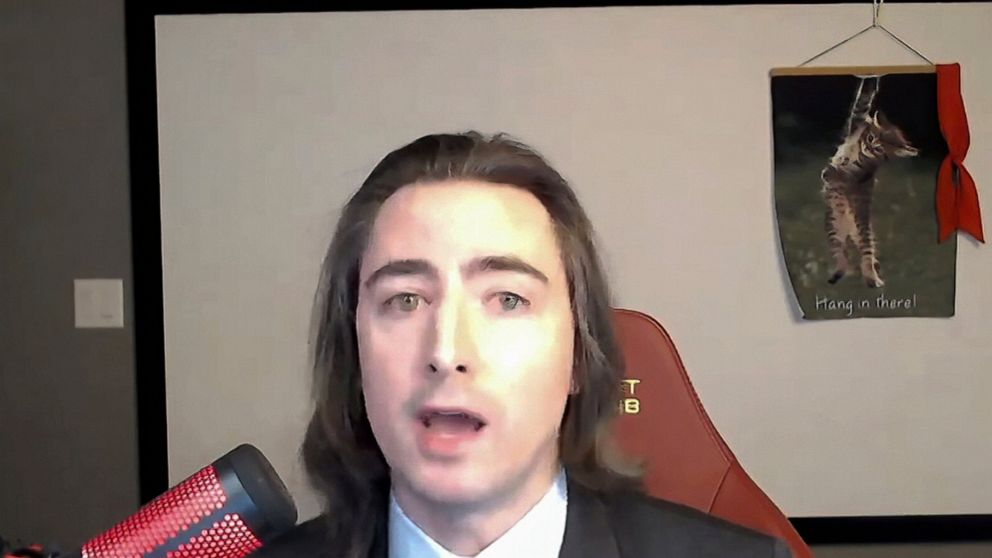 The social media movement that made a beloved icon of GameStop enthusiast Keith Gill continued to rally behind the YouTube personality known as Roaring Kitty as he testified to Congress on Thursday about his role in last month’s stock market frenzy.

“Today, the world shall know his name,” cheered one online fan on the social media website Reddit, superimposing a headshot of Gill over a boxer’s body.

The 34-year-old Gill became the most visible face of the GameStop rally largely because of his videos, where he wore a red headband and colorful, cat-themed T-shirts as he spent hours each week talking about the stock from the basement of his home in a suburb of Boston.

For the virtual hearing of the House Committee on Financial Services, Gill wore a jacket and tie, although the headband could be seen hanging on a poster of a kitten with the words “Hang in There!” —- a crowd-pleasing reference to people still holding onto GameStop shares after its remarkable rollercoaster rise and fall.

Gill reaped a big profit in the troubled video-game company after months talking about GameStop stock on his YouTube channel and on the Reddit forum WallStreetBets, where he went by the pseudonym DFV, for ‘deep value’ plus an expletive.

But on Thursday he rejected suggestions that he played a key role in the GameStop frenzy, arguing his social media conversations sharing analysis of company fundamentals were no different than what people do at bars, golf courses or with family members at home.

“The idea that I used social media to promote GameStop stock to unwitting investors and influence the market is preposterous,” Gill told lawmakers. “My posts did not cause the movement of billions of dollars into GameStop shares.”

Gill did acknowledge that some investors jumped in too late. GameStop shares soared as high as $483 in January but have since fallen back, trading Thursday afternoon at around $45.

“It is tragic that some people lost money and my heart goes out to them,” Gill said.

“A congressman is now on record congratulating DFV for his DIAMOND HANDS,” one Reddit user posted, referring to an exchange between Gill and Republican Rep. Warren Davidson from Ohio, alluding to WallStreetsBets lingo — typically accompanied with diamond emojis — for when an investor perseveres with a stock despite big risks.

Lawmakers on Thursday seemed far less interested in probing Gill than in other panelists representing Wall Street hedge funds and other bigger players. Some of the toughest questions went to the CEO of smartphone-based investment service Robinhood, which was widely criticized for restricting trading of GameStop and other volatile stocks for more than a day.

But along with congressional scrutiny, Gill is now facing an investigative inquiry from a Massachusetts state regulator and a class-action lawsuit claiming he misrepresented himself as an amateur investor while convincing other investors to buy GameStop shares. Gill was registered as a broker-dealer and worked as a “financial wellness educational director” for insurance company MassMutual while he was sharing his thoughts on GameStop online.

Gill emphasized to lawmakers his humble upbringing in Brockton, Massachusetts, where his father was a truck driver, his mother a nurse, and Gill was the first in his family to get a 4-year college degree but then struggled to keep steady work as he attempted a career in finance.

He said he began analyzing stocks as a hobby and to supplement his income. He took to social media to trade tips and help work out his ideas with other individual investors about stocks like GameStop, a phenomenon he said is helping to level the playing field for smaller investors.

“Ultimately my GameStop investment was a success,” he wrote in prepared written remarks. “But the thing is, I felt that way in December far before the peak, when the stock was at $20 a share. I was so happy to visit my family in Brockton for the holidays and give them the great news — we were millionaires.”

Gill said he analyzed stocks on his own time and got curious about GameStop in June 2019, after it began trading at a deep discount after a poor quarterly earnings report. He bought call options and increased his position throughout 2019 and 2020, convinced that the stock price was “dramatically undervalued.”

With options, an investor can pay a few dollars for the right to buy a stock at a later date at a certain price. If the stock hits or surpasses that target, investors can reap a bigger return than if they simply bought a share.

One Redditor going by the name Bruchtime27 penned an ode to Gill that began: “I love you man.”

“You did your homework for years, learning about the market and understanding what your strategy would be, all while talking care of your family and no doubt just being an all-around good dude through some incredibly difficult times since ‘08,” the user wrote.

As they celebrated Gill, many commenters on Reddit and Discord launched profanity-ridden tirades against the other panelists testifying at the hearing, particularly Vlad Tenev, Robinhood’s CEO, and executives from short-selling hedge funds that lost big after placing bets that the stock would drop.