Macron sets out strategy for multilateralism that ‘produces results’

Macron sets out strategy for multilateralism that ‘produces results’

For Emmanuel Macron, the failure to roll out Covid-19 vaccines promptly around the world has starkly underlined the need for more productive international co-operation on everything from pandemics to climate change — and Joe Biden’s arrival in the White House after four years of Donald Trump has provided an opportunity.

“The enemy of multilateralism as we speak, now that we have American re-engagement, is slowness and ineffectiveness,” the French president told the Financial Times.

Speaking ahead of a video conference among G7 leaders on Friday — the first multilateral meeting between Biden and his European counterparts — Macron laid out a characteristically ambitious international agenda to improve supplies of western vaccines to Africa, revive the UN and the World Trade Organization by re-engaging with China and Russia, combat climate change and control “the globalisation of hate” through social media.

“We conceived new forms of multilateralism in the more troubled world of recent years that were marked by new geopolitical tensions and the non-cooperation of certain great powers,” he said. “Now, for me, the key is multilateralism that produces results.”

Macron pointed to a series of tests, including co-operation on digital taxes and commitments to work with international organisations that would gauge US engagement as well as China’s willingness to renew international co-operation.

On climate, for example, this meant “results, not just promises — carbon neutrality by 2050, further commitments to targets in 2030 and the laying out of a very specific and concrete agenda”, he said.

Macron added he was optimistic about a resolution of the US-EU trade dispute in which Trump imposed tariffs on its French and other European allies that the Biden administration has yet to reverse.

“I think it would be extremely incoherent if we were not able to reach an agreement because that is not how you build an effective multilateralism,” he said. But he added he was optimistic because “I believe in the conformity of actions with words and I think that is the spirit of this administration”.

Another element of a revived multilateralism was re-engagement with, and reform of, institutions that had been “collectively blocked”.

The leading economies needed to work within the WTO so it could “reinvent 21st-century trade”, respecting social and environmental commitments while resolving disputes more rapidly, Macron said. He added that a rebooted WTO “is perhaps a way of pacifying relations with China”. 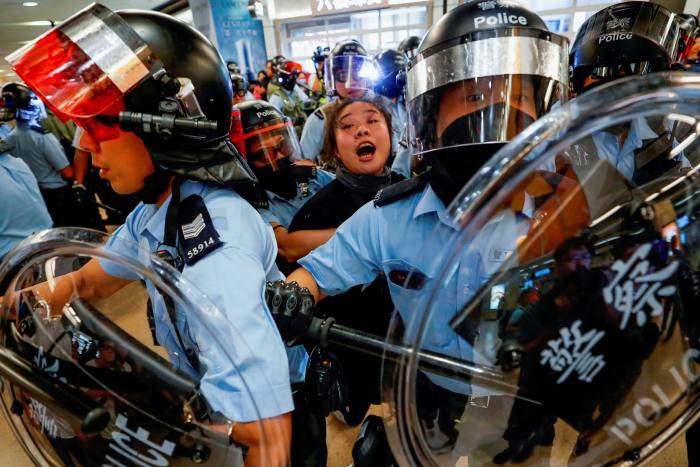 There must be a ‘constructive pressure’ to engage China on the subject of Hong Kong, Macron said © Tyrone Siu/Reuters

Meanwhile, the UN Security Council “no longer works” as a means of resolving big regional crises, he said. Its permanent members were “mad” to have allowed it to be displaced by competing regional formats. A revived council could become a way of avoiding an escalation of tensions between the US and China — but Macron was not sure whether China would co-operate.

France, the UK and Russia — the three other permanent members — all favoured re-engagement to “create a new zone of co-operation with China if China wants it”, he said. “And it is an open question. If China, in the next six months, does not want to co-operate in these structures, it will have made its choice.”

China was a systemic rival in terms of values and human rights. When it came to abuses against the Uighur population, or in Hong Kong, he said: “We must continue to try to have, if I may say, absolute clarity of condemnation and a constructive pressure to try to engage China, showing that it is hurting itself.”

Macron said he was struck in recent conversations with Biden and his vice-president Kamala Harris by how they spent a third of their time discussing threats to democracy, whether from rival autocratic systems or domestically. He hoped their strong commitment to defending democratic values would translate into transatlantic co-operation on regulating the big technology companies.

With the expansion of vast technology platforms “we have for the first time created a public space, an agora where there are no rules”.

Online anonymity coupled with the “virality of emotions” was changing the way people behaved, Macron said, describing it as a form of “anthropological metabolisation”.

“I’m not one of those who think they should be punished for making rents from innovation. What is not acceptable is when there is a situation that creates rents for incumbents and therefore excess profits that become illegitimate.”

The EU would pursue its own antitrust clampdown, he said, “but we also need to bring together the competition agendas of the US and Europe”. As for taxation of the Big Tech companies, Macron backed international negotiations through the OECD, which stalled under the Trump administration. American backing for the process was “exactly the test” of transatlantic co-operation on regulation, he said.

Macron defended his conception of Europe asserting more control over its defence and security, saying it was “good for the US and America today is behind it”.

“I am a defender of European sovereignty, of strategic autonomy, not because I’m against Nato or because I doubt our American friends, but because I am lucid on the state of the world, because I think we need a fair sharing of the burden and Europe cannot delegate its protection and the protection of its neighbourhood to the USA and so we have to do it together.”

Nato still needed to be reinvented, he added. “Nobody can tell me that today’s Nato is a structure that, in its foundations, is still pertinent. It was founded to face down the Warsaw Pact. There is no more a Warsaw Pact.”

Macron also defended his so-far fruitless attempt, since 2017, to rekindle relations with Moscow. Neither Russia nor the west had digested the end of communism, he said. “We continue sometimes to fight against an ideology or an organisation that no longer exists with a geopolitical logic that no longer exists and that has continued to fracture Europe.”

He added: “We have to accept that it takes time and there will continue to be disillusionment.”