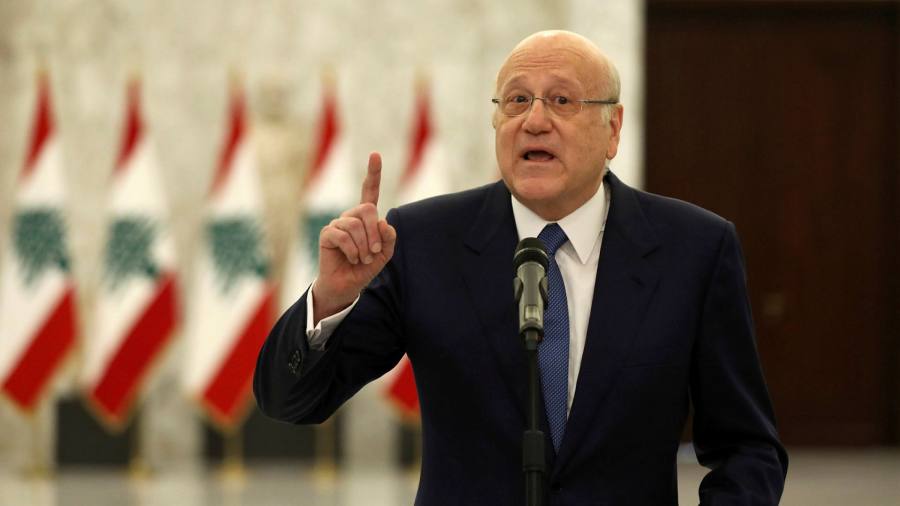 Lebanon has agreed a new government after a 13-month deadlock, raising the possibility of fresh talks with the IMF over a bailout for a country whose economy has all but collapsed.

Billionaire prime minister Najib Mikati, the third person to attempt to agree a government, succeeded in securing presidential approval for his slate of ministers on Friday.

There has been international pressure, led by France, for Beirut to form a government and introduce reforms since the devastating explosion at the port in the capital city in August last year. The previous government, headed by Hassan Diab, resigned after the blast.

The cabinet, formed mostly of technocrats, is “with the whole country, not with one group against another,” Mikati said after the cabinet’s confirmation at the presidential palace. “I hope we can . . . at least stop the collapse,” Mikati said, describing the situation as “difficult”.

Veteran central bank official Youssef Khalil has been named finance minister. Khalil will be responsible for reviving bailout talks with the IMF, as well as overseeing the restructuring of Lebanon’s moribund banking sector.

The new ministers are mostly technocrats who have not previously held political power. But key ministries are shared between Lebanon’s sectarian political parties, with the finance minister generally named by the majority Shia Amal party.

Mikati, who hails from the deprived northern city of Tripoli, is one of only two Lebanese billionaires living in Lebanon — the other is his brother, Taha. The telecoms tycoons co-founded their M1 Group during Lebanon’s 15-year civil war, which ended in 1990.

Mikati used his address to stress that Lebanon “needs the Arab world,” a nod to the fissure between Beirut and its traditional Gulf allies, who have traditionally offered Lebanon financial help. The soured relations were partially caused by the rise of Hizbollah, a powerful Shia Islamist political party and paramilitary supported by Iran. Hizbollah supported Mikati’s premiership.

His task as prime minister will be arduous. The World Bank has warned that Lebanon’s economic crisis, fostered by decades of state mismanagement and corruption, is likely to rank as one of the world’s most severe in 150 years. The collapse has pushed thousands of skilled workers to emigrate, and tipped an estimated 50 per cent of the approximately 7m population under the poverty line.

Price rises and rocketing unemployment have created widespread impoverishment in a country previously considered upper middle income. After an official peg between the Lebanese pound and the US dollar broke, the pound lost around 90 per cent of its value, leading to hyperinflation in the import dependent country. In June, the most recent official data available, the price of food and non-alcoholic drinks rose 220 per cent year on year.

In the past few months, problems with financing fuel imports have caused severe petrol shortages, bringing the country practically to a standstill. Its chronically weak power grid has all but gone dark, while the private generators which make up for the state’s shortfall have become overloaded and unaffordable for many.

In the immediate aftermath of the announcement, the pound gained on the dollar to L£15,000 — its highest rate in four months, and up from L£19,000 the previous day.

Ed Yardeni says a fall correction is a buying opportunity, just don't try to time it