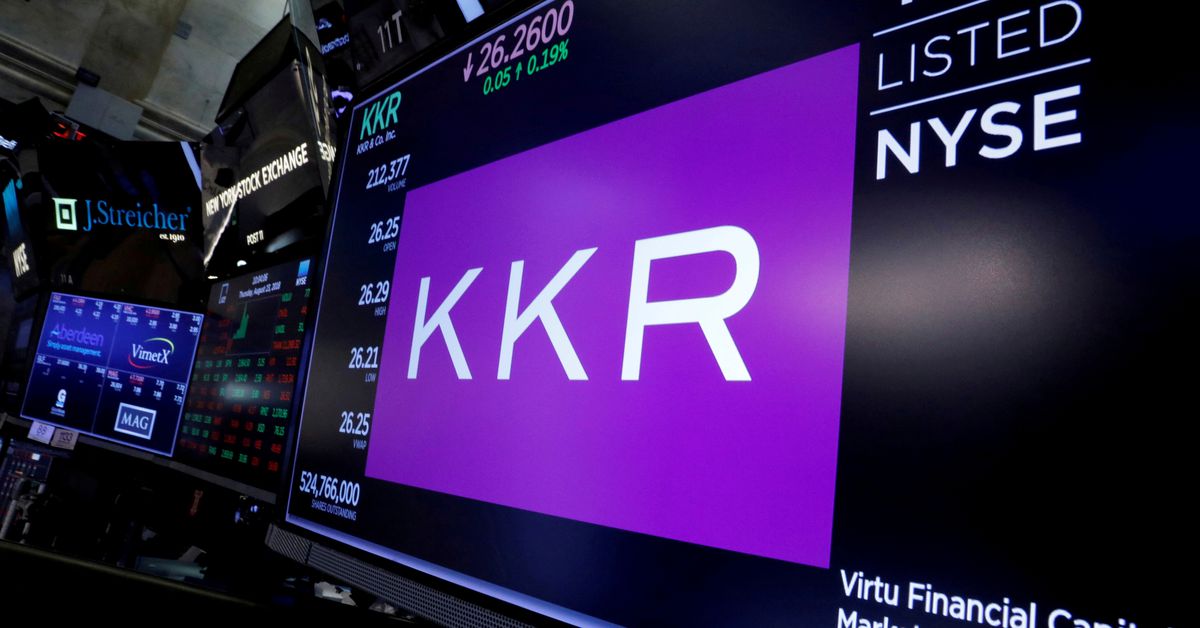 Trading information for KKR & Co is displayed on a screen on the floor of the New York Stock Exchange (NYSE) in New York, U.S., August 23, 2018. REUTERS/Brendan McDermid

The transition has been in the works for years and is unlikely to surprise the firm’s investors. KKR had named Bae, 49, and Nuttall, 48, as co-presidents in 2017. KKR said on Monday that Kravis, 77, and Roberts, 78, would remain involved in the running of the firm as executive co-chairmen.

KKR’s shares have tripled in value and its assets under management and distributable earnings have doubled since Bae and Nuttall officially became Kravis’ and Roberts’ top lieutenants four years ago, KKR said.

Still, Nuttall and Bae face a high-stakes challenge in replicating the successful working relationship of Kravis and Roberts, two cousins who started KKR 45 years ago. From having their names as part of KKR’s acronym to maintaining a close-knit culture of old-school Wall Street loyalty, they maintained a tight grip on the firm and helped shape the leveraged buyout industry.

The move leaves Blackstone Group Inc (BX.N) CEO Stephen Schwarzman, 74, as the only founder of a major publicly listed private equity firm not to have relinquished the role of chief executive, though his No. 2, president and chief operating officer Jonathan Gray, has been in line for years to succeed him.

Nuttall and Bae both joined KKR in 1996. Nuttall had previously spent less than two years at Blackstone, while Bae had a similarly short stint at Goldman Sachs Group Inc’s (GS.N) principal investments group.

Nuttall helped take KKR public, a process that involved merging the firm with an Amsterdam-listed fund in 2009 and then moving the listing to New York in 2010. He has been a fixture on the firm’s quarterly earnings call with Wall Street analysts and also ran KKR’s capital markets, insurance, credit, hedge funds and fundraising initiatives.

Bae has been the main driver of KKR’s expansion into Asia, making the firm one of the largest U.S. private equity investors on the continent. The Korean-American dealmaker also sat on the investment committees of KKR’s global private equity business.

By attracting money from some of the world’s largest institutional investors such as pension plans and sovereign wealth funds, KKR grew from a single $30 million fund in 1978 to more than $429 billion in assets under management currently. These assets span private equity, real estate, corporate credit and hedge funds.

Kravis and Roberts have an estimated net worth of $8.6 billion and $9.1 billion, respectively, according to Forbes.

In addition to its leadership changes, KKR said on Monday it would take steps to eliminate its dual-class share structure. Carlyle was the first major publicly-listed private equity firm to do this 2019, followed by Apollo this year.

KKR said that its common shareholders will be able to vote on a one-to-one basis on all major important issues, including the election of board directors. It added that this will be achieved though a complex web of mergers of KKR entities to be completed by 2026.