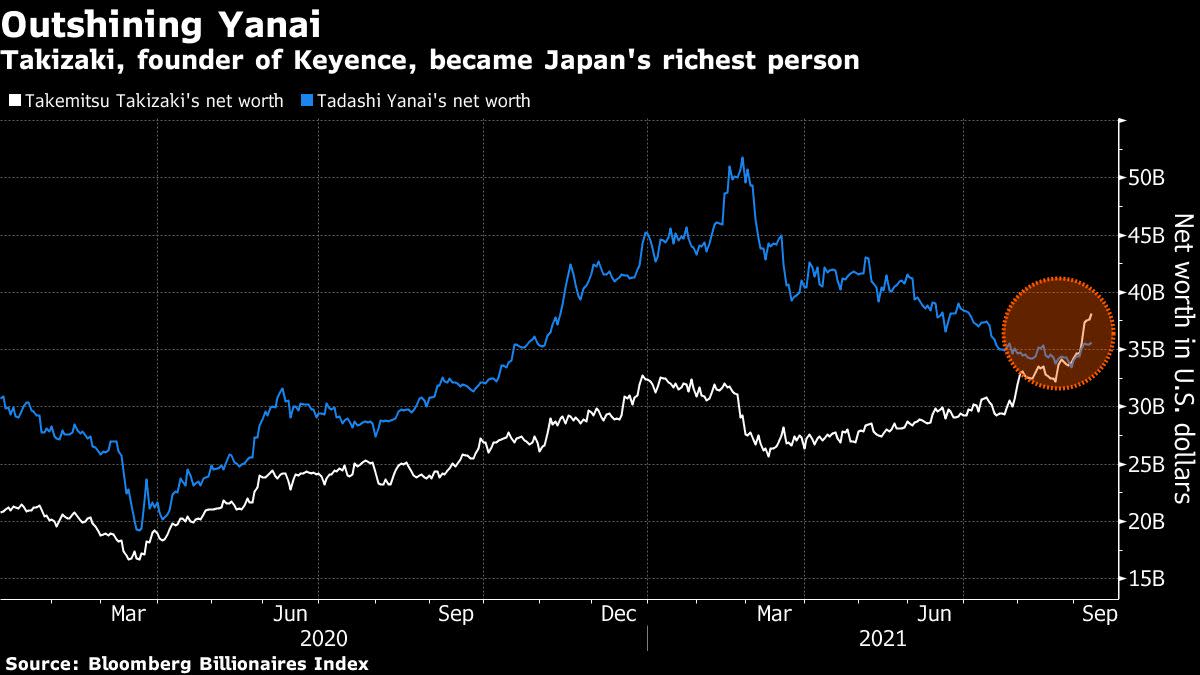 Takizaki is worth $38.2 billion, according to the Bloomberg Billionaires Index, after his company’s shares almost doubled from the start of last year through Monday’s close. Fast Retailing Co.’s Yanai, who’s lost more than a fifth of his wealth in 2021, has a net worth of $35.5 billion.

It’s an example of how the wealth landscape is shifting amid the Covid-19 pandemic, as a factory-automation entrepreneur replaces a retail mogul at the top of the country’s rich list. Keyence has also been boosted by its forthcoming inclusion in Japan’s blue-chip equity index, the Nikkei 225 Stock Average.

“This positioning is likely to stay for a while,” Mitsushige Akino, a senior executive officer at Ichiyoshi Asset Management Co. in Tokyo, said of the wealth ranking. “The big factor recently was being added to the Nikkei 225.”

Takizaki founded Keyence in 1974 and steadily built the company as a maker of sensors, measuring instruments, machine-vision systems and other equipment for industrial automation. The secretive Osaka-based firm is known for its high profit margins and for paying its staff well.

Keyence’s shares have risen 96% since the start of 2020 through Monday’s close, giving the company a market value of about $167 billion. By this measure, it’s the second-largest firm in Japan after auto giant Toyota Motor Corp.

The pandemic spurred demand for factory automation as governments around the world imposed social-distancing measures, according to Bloomberg Intelligence analyst Takeshi Kitaura. He pointed to the company’s operating-profit margin of more than 50%.

Keyence shares jumped last week after the company was announced as an addition to the Nikkei 225 in a major shakeup of the famous equity gauge. Nintendo Co., the maker of the Switch gaming console, was also among the three companies picked to be included from Oct. 1.

Takizaki, who owns 21% of Keyence, has added $5.9 billion to his fortune this year and is now the ninth-richest person in Asia, according to the Bloomberg index.

Fast Retailing’s Yanai, meanwhile, has lost $9.7 billion in wealth in 2021, or about 22% of his fortune, as shares of the maker of Uniqlo clothing fell 18% through Monday’s close. Fast Retailing lowered its full-year operating-profit forecast in July on weak summer sales in Japan and government measures to curb Covid-19 in the country and other Asian markets.

SoftBank Group Corp. founder Masayoshi Son is Japan’s third-richest person with a net worth of $26.9 billion.

Takizaki, 76, who didn’t attend college, helped invent the precision sensors used on assembly lines such as those to build cars for Toyota. He’s now Keyence’s honorary chairman after stepping down as chairman in 2015.

Keyence trades at about 63 times estimated earnings. Bloomberg Intelligence analyst Kitaura said he remains positive about the firm’s prospects. He pointed out that more than 40% of its revenue still comes from Japan.

“Keyence has strong potential to grow overseas,” he said.