Greece’s tourism minister has called on EU leaders to “move more quickly” to embrace the vaccine certificates that could allow mass travel to resume, as Athens seeks to repair a holiday industry that has been battered by the coronavirus pandemic.

“Looking at the reaction of some countries to vaccination certificate proposals, I feel there’s a lot of short sightedness. There’s more to be done now to prepare ourselves,” minister Harry Theocharis told the Financial Times.

“Some countries are very much preoccupied with now” he said, as northern European nations, in particular, were unwilling to look ahead and plan for an economic recovery in the summer. “We need to move more quickly.”

The introduction of vaccination passports that could allow leisure and business travellers to move between countries after being inoculated will be discussed at the EU summit that begins on Thursday.

Member states led by Greece floated the idea last month but the bloc is divided and diplomats see early adoption of the proposed system as unlikely, because of fears they will set up a discriminatory two-tier system of citizens’ travel rights.

Tourism is vital to Greece, accounting for about a fifth of GDP and employment, according to the Greek Tourism Confederation. Despite a partial reopening last summer, the restrictions on international travel wiped 4 per cent from Greece’s GDP, UN estimates suggest, as hotel and accommodation revenues slumped by two-thirds. 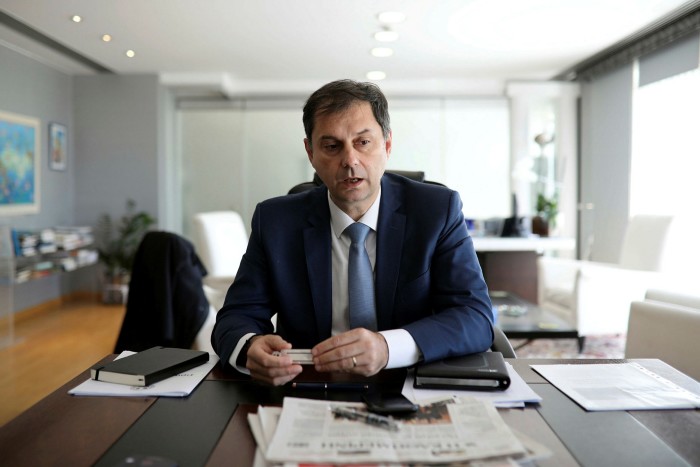 Harry Theocharis, the tourism minister for Greece, said plans for safe travel had to be agreed soon, as people needed to know now whether summer holidays would be possible this year © Constantina Peppa/Reuters

The Greek sector is almost entirely reliant on international tourism with the domestic population too small and still too financially constrained following the country’s 2008 debt crisis to make up for a fall in external visitors.

Germans make up the largest number of international tourists to Greece, accounting for about 4.4m visits in 2018, according to the OECD. Visitors from the UK, which is no longer an EU member, come a close second.

Athens has been particularly aggressive in pursuing vaccination passports as a way of allowing holidaymakers to return. It has found support from member states with large tourism sectors or concerns about travel from neighbouring countries with higher infection rates, but countries including Germany and France have remain unconvinced.

Passenger locator forms, intended as a universally recognised means of contact tracing across the bloc, have been under discussion for several months but are yet to materialise.

One fear is that vaccine passports would stoke public anger or even legal action by those who are prevented from travelling simply because they have not yet reached their turn in the inoculation queue.

Theocharis said plans for safe travel had to be agreed soon, as people needed to know now whether summer holidays would be possible this year.

He hit out at the British government for warning its citizens against international holidays despite UK success with its rapid vaccination rollout.

“I don’t understand this kind of messaging. People from the UK were able to have a vacation . . . I don’t see how we can take one step back now that we have more tools in our arsenal.”

Greece this month signed a deal with Israel to allow people who had been vaccinated to move between the two countries without the need to show a negative virus result. Kyriakos Mitsotakis the Greek prime minister, praised it as a “trial run of what we can do with other countries”.

Theocharis said talks for a similar arrangement with the UK were ongoing, although Britain does not issue proof of vaccination among its population. Greeks are provided with a digital certificate to show they have been vaccinated.

He also insisted that vaccinations would not be mandatory for travel and only meant that those who had been inoculated would not have to take a Covid-19 test to enter the country.