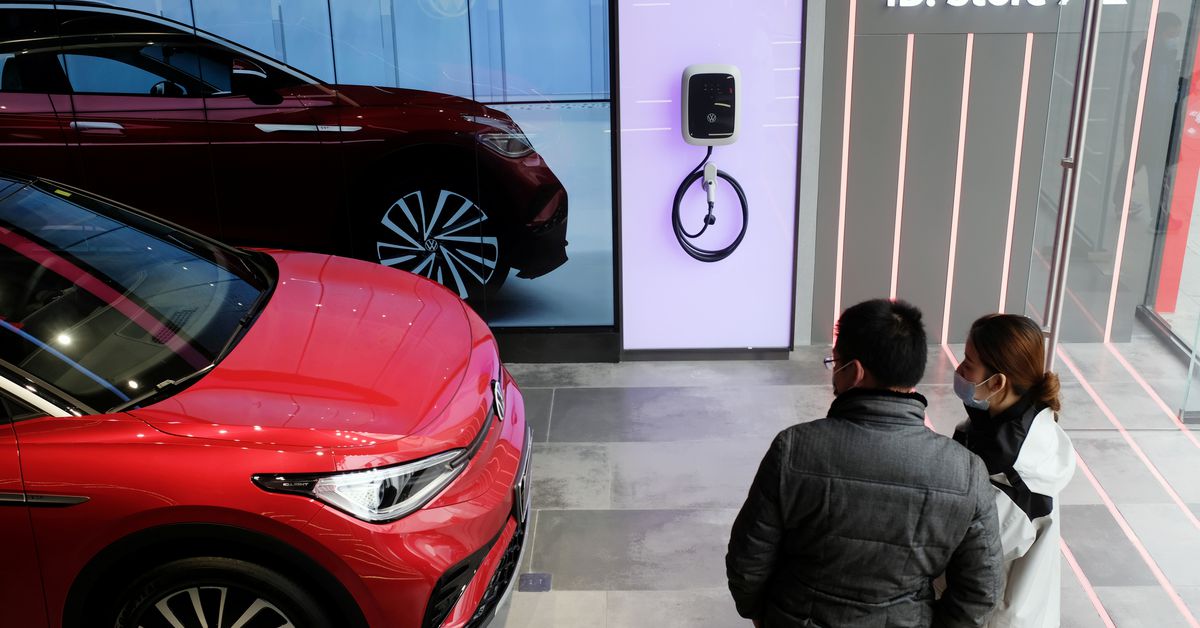 BEIJING, Sept 13 (Reuters) – Volkswagen (VOWG_p.DE) is in talks to tighten its grip on a majority-owned joint venture in China, sparking tensions with the German automaker’s other Chinese partners who fear they could be sidelined, sources familiar with the matter said.

The world’s second-biggest carmaker secured a controlling 75% stake in a venture with China’s JAC (600418.SS) in 2020 after Beijing relaxed rules that had previously barred foreign firms from owning majority stakes in local auto companies.

Volkswagen, which took control of one of JAC’s plants in the eastern city of Hefei last year, is now in talks to buy another as part of a big expansion in electric vehicles (EV), three sources with knowledge of the matter said.

That has rattled Volkswagen’s other Chinese partners, SAIC Motor (600104.SS) and FAW (SASACJ.UL), which want the German group to commit more models to their own ventures, sources at Volkswagen, the Chinese firms and joint ventures told Reuters.

The stakes are high. Boosting its majority-owned business would mean Volkswagen wouldn’t have to share so much profit with state-run partners and can accelerate its EV push without having so many partner negotiations in the world’s biggest car market.

But the German group can’t afford a false step, as it now makes about 40% of sales and half of its profits in China – mostly through its ventures with SAIC and FAW.

In a sign of its ambitions, Volkswagen is planning to relocate hundreds of Beijing-based staff to Hefei, according to Volkswagen sources and a memo seen by Reuters. Beer gardens are being set up around the Hefei plant to create a German atmosphere for its employees.

Volkswagen told Reuters the venture’s portfolio would not directly compete with those of its other joint businesses in China, but would rather be complementary.

“The investment is a long-term strategic decision as we expect the total NEV (new energy vehicle) market in China to grow to around 30 million NEVs by 2030,” it said. That would be up from around 1.4 million NEVs last year.

FAW, JAC and SAIC declined to comment. Volkswagen has a 50-50 venture with SAIC, and holds 40% of its venture with FAW.

The sources cautioned Volkswagen has not made decisions on these plans and they are subject to change. The German group declined to comment.

Selling its Hefei plant would leave JAC only making passenger cars under the Sihao marque in nearby Anqing city, one of the sources said.

The Chinese company, whose parent group is owned by Volkswagen and local government, still makes trucks and vans under its own brand.

Volkswagen is the most successful foreign automaker in China, selling around 3.85 million vehicles there last year despite the pandemic. That compares with General Motors’ (GM.N) 2.9 million vehicles and Toyota’s (7203.T) 1.8 million.

“It’s fair to say that without VW, the Chinese autos industry wouldn’t exist as we know it today and vice versa,” Bernstein analysts said in a recent a research note.

“No global OEM (original equipment manufacturer) is bigger in China and has leveraged the benefits more than VW. China was (and remains) the source of about 50% of VW’s earnings and cash flows.”

In its early years, Shanghai-based SAIC-Volkswagen helped Volkswagen break into the market with local production of the Santana sedan in 1985.

FAW-Volkswagen, meanwhile, made Audi the first locally-produced premium car model in China, grabbing orders from the government and leading its competition with BMW (BMWG.DE) and Daimler (DAIGn.DE).

At their height, Santana and FAW-Volkswagen’s Jetta and Citroen Fukang – compact sedans together known as the “old three” – made up a majority of China’s car market in the 1990s.

SAIC-Volkswagen and FAW-Volkswagen are now seeking assurances their businesses won’t suffer as Volkswagen looks to step up investment in Hefei, five of the sources said.

“We laid good ground for Volkswagen in China so it cannot abandon us in the future,” one senior FAW source said.

Tensions between the partners are not new.

Volkswagen CEO Herbert Diess riled SAIC in 2019 when he told the media he planned to increase stakes in Chinese ventures.

SAIC responded that any major decision related to the joint venture required discussions by both partners and it was “disappointed” Volkswagen would announce such an important issue without coordinating with it.

The Chinese firms frequently ask for more models to boost their ventures, and negotiations have not always been smooth.

SAIC said publicly in both 2018 and 2019 that its MEB factory would make electric Audi cars. However, Volkswagen was then not fully on board with the plan, sources said, although there have been signs of progress recently.

FAW, meanwhile, has pressed Volkswagen for a standalone electric venture in which Audi would hold a 75% stake and FAW 25%. However, three of the sources said the project was struggling to pass Volkswagen’s internal feasibility review.

“Two old partners keep asking for more models that we cannot satisfy. This is torturing,” one senior Volkswagen executive said. Volkswagen now has over 50 models in China. General Motors has 60, including many mini-van models, and Toyota around 20.