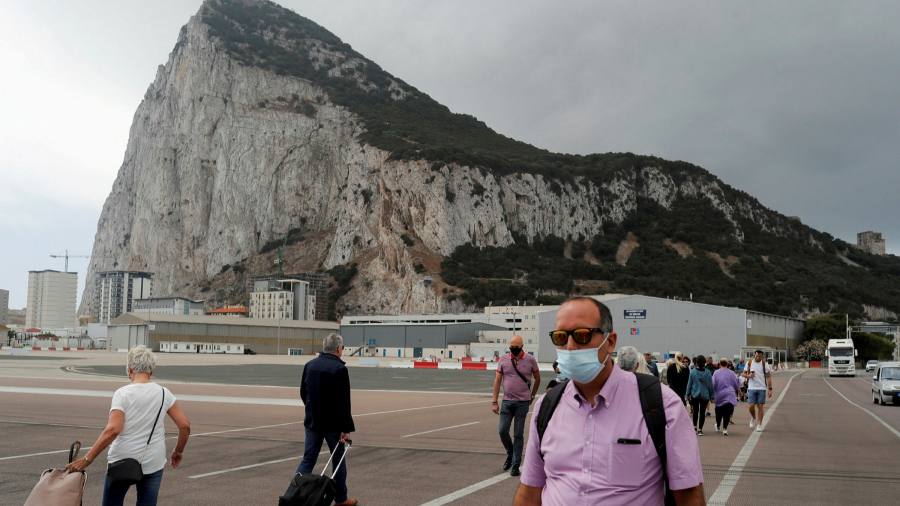 UK foreign secretary Dominic Raab has accused the European Commission of undermining British sovereignty over Gibraltar following the publication of Brussels’ draft guidelines for negotiations between the UK and EU on the Mediterranean territory in the wake of Brexit.

Gibraltar was not included within the EU-UK agreement signed last Christmas. But at the end of 2020, the governments of the UK, Spain and Gibraltar agreed a framework outlining the terms of any future arrangement in the region.

The commission’s draft mandate, released on Tuesday, said it aimed to put forward solutions “to remove physical checks and controls on persons and goods at the land border between Spain and Gibraltar”.

Responding to the draft, the UK government argued that the mandate contradicted the agreed framework and urged the EU to reassess its approach.

“It seeks to undermine the UK’s sovereignty over Gibraltar, and cannot form a basis for negotiations,” Raab said. “We have consistently showed pragmatism and flexibility in the search for arrangements that work for all sides, and we are disappointed that this has not been reciprocated.”

Maros Sefcovic, commission vice-president responsible for EU-UK relations, said the draft mandate was designed to have a “positive impact” on people in the region.

“By putting forward this draft mandate, we are honouring the political commitment we made to Spain to start the negotiations of a separate agreement between the EU and the UK on Gibraltar,” he said in a statement.

“This is a detailed mandate, which aims to have a positive impact for those living and working on either side of the border between Spain and Gibraltar, while protecting the integrity of the Schengen Area and the single market.”

Member states must agree the EU draft mandate before negotiations can begin.

Madrid embraced the document on Tuesday, saying it “welcomed” the negotiating outline for an EU-UK treaty on Gibraltar and that it had been in “close contact” with the commission “at all times” during its preparation.

Spain’s foreign ministry said in a statement: “Spain will at all times accompany the European Commission, ensuring that its legal positions, interests and objectives are safeguarded and that the commitments reached between Spain and the United Kingdom are respected.”

Following the UK’s departure from the EU, freedom of movement and the implications of border checks for those travelling between Spain and Gibraltar have remained areas of contention.

In December, on the eve of the wider EU-UK deal, an agreement between Spain and Britain over freedom of movement on the Gibraltar border almost collapsed over how entrance into the Schengen zone would be policed.

The sides fudged that detail at the time. Madrid signalled that it would be willing to have officers from EU border agency Frontex control passage through the airport and port as a temporary confidence building measure, but noted that, as an EU member, it would be in charge of the bloc’s external border. The Gibraltar government, for its part, was clear that it would not accept Spanish officials controlling its borders.

Throughout the discussions, the UK has sought to emphasise the importance of maintaining the sovereignty of the overseas territory, which has been British since 1713. Gibraltar also has close links with Europe, with more than 90 per cent of its residents voting to remain in the EU in the 2016 Brexit referendum.