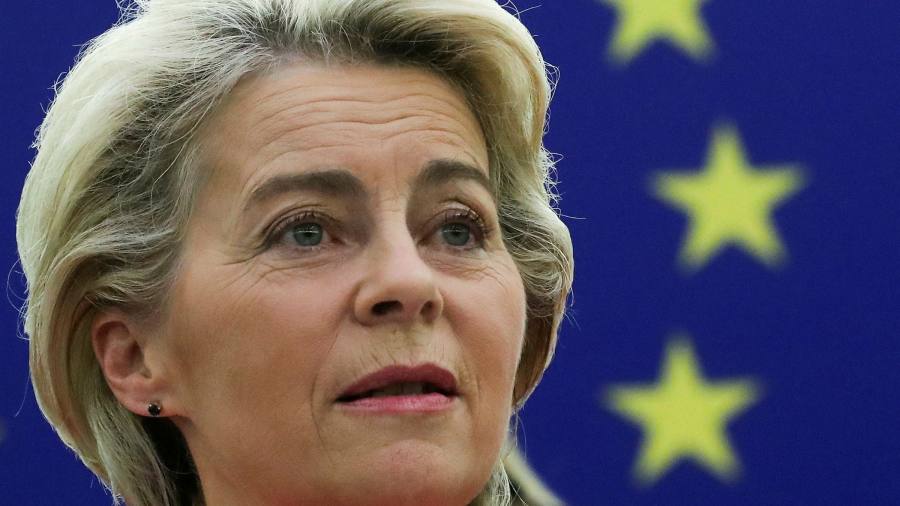 The EU plans to step up its challenge to China through international spending on infrastructure and other projects as it seeks to rival the economic and political influence that Beijing has won through its Belt and Road Initiative.

European Commission president Ursula von der Leyen put forward the measure, dubbed “Global Gateway”, in her annual State of the Union speech on Tuesday. In an era of global “hyper-competitiveness” the EU needed to become a “more active global player”, she said.

This meant creating links around the world, rather than “dependencies”, she said — a reference to concerns in G7 capitals about the influence that China’s BRI programme has given it in developing countries.

A senior EU official said Brussels’ initiative would offer lower-income countries “transparent and values-based” project financing, going beyond the infrastructure projects that are a BRI mainstay.

Von der Leyen also proposed a ban on products made using forced labour, amid concerns over abuses in the Chinese region of Xinjiang. She also vowed to improve EU co-ordination on security.

The commission president’s speech builds on efforts to enhance the EU’s ability to punch its weight on the global stage — dubbed its “strategic autonomy” — including in relations with China. The US-led pullout from Afghanistan heightened concerns within the EU about its reliance on Washington.

The Global Gateway programme follows a decision at the G7 summit in the UK in June to embark on a global infrastructure initiative, described by the Biden administration as “values-driven, high-standard and transparent”.

Brussels’ move follows a backlash against Chinese projects as some recipient countries complain that BRI debt terms are onerous and the building and environmental standards deficient. Michael Clauss, Germany’s ambassador to the EU, praised the initiative, saying it was “important to shape globalisation the European way”.

Von der Leyen did not disguise her focus on China. “We are good at financing roads. But it does not make sense for Europe to build a perfect road between a Chinese-owned copper mine and a Chinese-owned harbour,” she said in Strasbourg. “We will work together to deepen trade links, strengthen global supply chains and develop new investment projects on green and digital technologies.”

The commission will also propose a ban on sales of products made by forced labour in the EU single market, she added, saying: “There are 25 million people out there who are threatened or coerced into forced labour. We can never accept that they are forced to make products — and that these products then end up for sale in shops here in Europe.”

The move comes in the wake of repeated claims that China is forcing thousands of Uyghurs and members of other minority groups to work in Xinjiang and elsewhere. This year the US worked with the EU, Canada and UK to impose sanctions on Chinese officials over Xinjiang. Last year the EU signed a EU-China Comprehensive Agreement on Investment with Beijing, requiring China to provide a “road map” for implementing international conventions against use of forced labour.

EU officials however noted that the ban on forced labour was not as robust as an earlier commission pledge to introduce legislation that will aim to make companies liable for potential human rights and environmental abuses in their supply chains. Von der Leyen did not mention this proposal.

With the German elections looming this month, Von der Leyen shied away from bold legislative initiatives, instead focusing heavily on previously trailed proposals including the EU’s sprawling green legislative programme and a project to create a health authority to equip the union to face more pandemics.

Von der Leyen confirmed commission plans to relaunch a consultation on EU debt and deficit rules — a highly charged topic in Germany — but gave no hint as to the likely conclusions.

The former German defence minister also dwelt on the lessons from the withdrawal from Afghanistan. “Europe can — and clearly should — be able and willing to do more on its own,” in terms of defence, she argued.