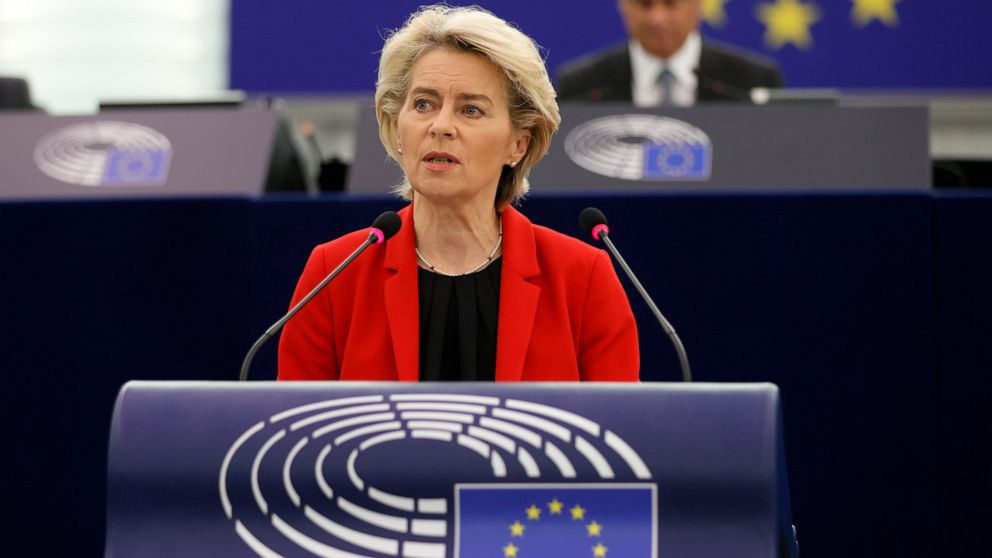 BRUSSELS — The European Union’s top official on Wednesday exhorted the bloc’s 27 member nations to wean themselves off natural gas not only to speed the transition to clean energy but also to make the bloc a more independent player in the world.

On the eve of an EU summit centering on the energy crisis, European Commission President Ursula von der Leyen told legislators that since the bloc imports 90% of its gas — much of it from strategic rival Russia — “this makes us vulnerable.”

As a result she wants the EU to double down on a swift transition to clean energy from wind and sun, which can be domestically produced and will ultimately be a lot cheaper than imported fossil fuels.

The recent spike in gas prices has hit the EU’s most vulnerable families first, and von der Leyen again made a call on member states to make sure taxes and levies on energy could be adapted to shield the poorest EU citizens.

But von der Leyen equally hit the theme of strategic importance to be less reliant on imports. Even if a partner country like Norway upgraded its exports to the bloc to meet the increased demand, one major player did not.

“While (Russia’s) Gazprom has honored its long term contracts with us, it did not respond to higher demand, as it did in previous years. So Europe is today too reliant on gas,” she said.

As a result, the transition to clean energy wasn’t only necessary to become energy neutral by mid-century.

“The transition to clean energy is not only vital for our planet. It is also crucial for our economy and for the resilience to energy price shocks,” she said.

It was a veiled reference to EU leaders such as Hungarian Prime Minister Viktor Orban, who has specifically blamed the hike in energy prices on the European Commission’s Green Deal plans. The project aims to cut greenhouse gas emissions by 55% by 2030 and making the bloc carbon neutral by 2050.

Follow all AP stories on climate change issues at https://apnews.com/hub/climate-change.