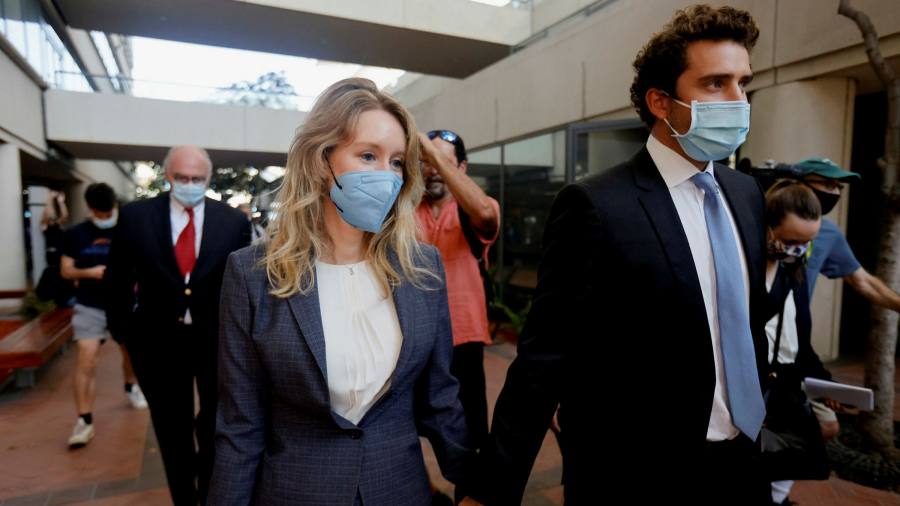 In a California courtroom, the trial of Theranos founder Elizabeth Holmes boiled down to two competing arguments: did she lie and cheat to make money, as prosecutors alleged, or did she simply fail to deliver on an ambitious vision to reinvent blood testing?

Jurors heard opening arguments on Wednesday in a trial that could last months, involve dozens of witnesses and test the boundaries of Silicon Valley boosterism.

The proceedings drew a long queue of interested observers — including three women dressed in all-black ensembles that appeared to mimic Holmes’s signature style.

Holmes has been charged with wire fraud and conspiracy to commit wire fraud for allegedly defrauding investors and patients by making false claims about Theranos’s blood tests and finances. She has pleaded not guilty. If convicted, she faces a maximum sentence of 20 years in prison.

The trial will resume on Friday and legal analysts said it could boil down to a notoriously tricky concept: the Theranos founder’s state of mind and whether she believed her own hype, despite evidence to the contrary.

“It is one of the hardest things that the legal system has to deal with, because there really isn’t a way of reading somebody’s mind,” said Jessica Roth, a professor at Cardozo School of Law at Yeshiva University in New York and a former federal prosecutor.

Citing a series of supporting examples, prosecutors sought to portray Holmes as repeatedly lying about the status of her business, allowing her to successfully raise hundreds of millions of dollars and be dubbed the world’s youngest female self-made billionaire.

At one point, prosecutors alleged, Holmes presented investors with a forged, laudatory report supposedly representing the company’s work with Pfizer.

The financial struggles of Theranos became a recurring theme in the prosecution’s arguments.

Leach said in his opening statement that Theranos had at one point in 2013 been burning through $1m-$2m a week as its cash balances dwindled to $15m, while the company’s scientists were warning about the reliability of its proprietary technology.

“Out of time and out of money, the defendants decided to mislead,” Leach said.

The prosecution’s first witness, Theranos’s former financial controller So Han Spivey, testified that as early as 2009, the company was so cash-strapped it began selectively paying different vendors.

Spivey also testified that KPMG, the external auditor for Theranos, declined to produce an opinion on the company’s financial statements from 2010 to 15. KPMG did not immediately respond to a request for comment.

Prosecutors provided some clues about their witness strategy while largely avoiding mention of the biggest names that dotted an extensive list of those who could be called to testify.

Among a litany of Theranos investors, Leach called out two: Lisa Peterson, an executive at the company that manages money for the DeVos family, and Brian Grossman, who helped direct an investment from hedge fund Partner Fund Management.

PFM previously sued Theranos over what it called a “series of lies”. The case was settled in 2017.

Prosecutors told jurors they would hear from employees as well as “outsiders”, including representatives from healthcare companies that had worked with Theranos.

Former Theranos lab director Adam Rosendorff, one of the prosecution’s most important witnesses, also featured prominently in the defence team’s arguments, which attempted to show that Holmes relied on her scientific professionals to validate the company’s tests.

‘Failure is not a crime’

Lawyers for Holmes sought to cast her as an ambitious and earnest entrepreneur who failed to deliver on lofty promises.

Lance Wade, a defence attorney, described Holmes walking out of the Theranos office for the last time in 2018 as “her last day devoted to a dream that she had spent nearly half of her life, her entire adult life, pursuing”.

Wade stressed that Holmes had believed in the promise of her company but its failure did not constitute a crime.

“The evidence is going to show you she did her level best day in and day out to make Theranos successful, and she genuinely deeply believed it would be successful,” he said.

Responding to the charges of fraud, the defence team argued that investors knew the company’s risks and limitations.

“They were eager to invest in a tech company, and they decided the risks did not outweigh the potential for profit,” Wade said.

He attempted to portray inaccuracies in Theranos’s tests as typical, while arguing Holmes had believed the tests were accurate and reliable based on the work of her own clinical team.

The defence also argued that Holmes did not actually get rich from Theranos.

Wade acknowledged that Holmes owned about half of Theranos, giving her a stake worth billions of dollars at the company’s peak, when investors valued it at $9bn.

But Holmes never took the opportunity to turn her paper wealth into actual dollars by selling shares. “She passed on every opportunity to sell,” he said.

Sports betting to start in Arizona in time for NFL season