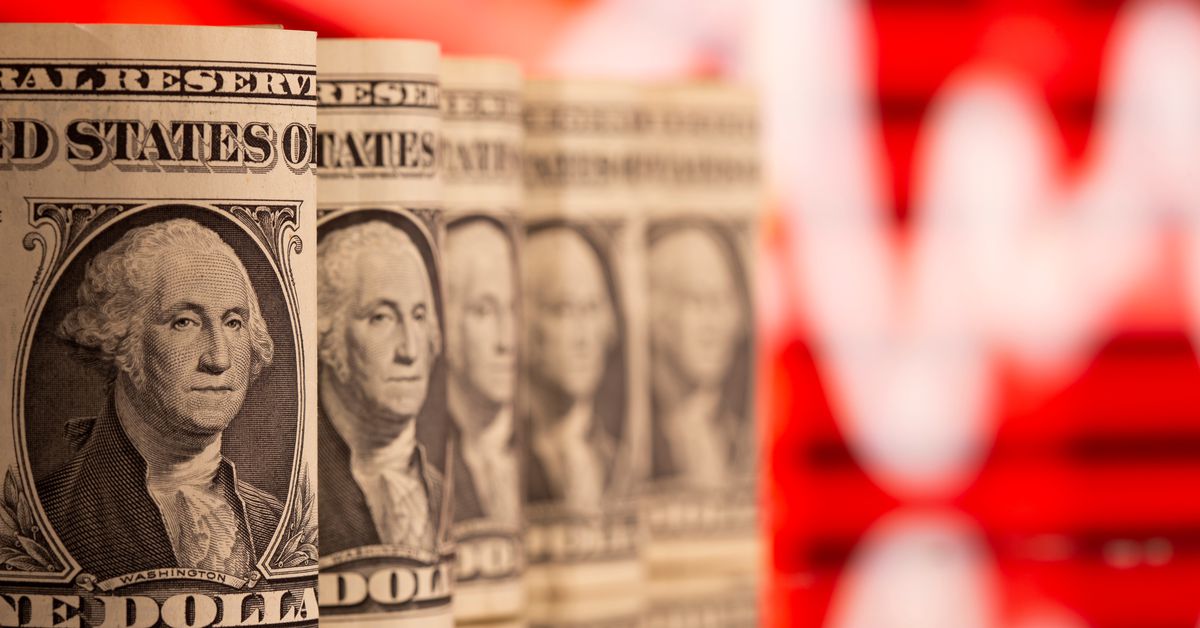 U.S. One dollar banknotes are seen in front of displayed stock graph in this illustration taken, February 8, 2021. REUTERS/Dado Ruvic/Illustration

TOKYO, Oct 14 (Reuters) – The U.S. dollar touched its lowest point this week against major peers on Thursday, taking a breather from a rally that had lifted it to a one-year high powered by expectations for quicker Federal Reserve interest rate hikes.

The dollar index , which measures the greenback against six rivals, was about flat at 94.048, after dropping 0.53% on Wednesday, the most since Aug. 23.

The index reached 94.563 on Tuesday, its highest since late September 2020, after surging nearly 3% since early last month.

The dollar pulled back even after minutes of the Federal Open Market Committee’s September meeting confirmed tapering of stimulus is all but certain to start this year, and showed a growing number of policymakers worried that high inflation could persist.

A Labor Department report showed U.S. consumer prices rose solidly in September, and they are likely to rise further amid a surge in energy prices, potentially pressuring the Fed to act sooner to normalise policy. read more

Most Fed officials, including Chair Jerome Powell, have so far contended that price pressures will be transitory.

The U.S. 5-year, 5-year-forward breakeven inflation rate , one of the more closely followed gauges of long-term inflation expectations, surged to its highest level in seven years at 2.59% overnight.

Money markets are pricing about 50/50 odds of the first 25 basis point rate hike by July.

“The USD’s reaction may be an example of ‘buy the rumour, sell the fact,'” Joseph Capurso, a strategist at Commonwealth Bank of Australia, wrote in a client note.

“We consider the FOMC’s assumption of a transitory spike in inflation is wrong. A more aggressive tightening cycle will support the USD in our view.”

Sterling edged up to $1.3666, extending Wednesday’s 0.55% advance and approaching its highest level this month.

Westpac expects the dollar to take “another leg lower” over the coming months.

“Softer growth for the U.S. economy relative to the acceleration being seen in Europe and, to a lesser extent, the UK will weigh on the U.S. dollar,” the bank’s strategists wrote in a research report.

Substantial U.S. fiscal stimulus has already been priced into the dollar, but is not certain to pass through Congress, they said, forecasting the dollar index to drop to 91.50 by March, with the euro rising to $1.20, while sterling gains to $1.41 in the latter half of next year.

European rival to PayPal and Square makes $317 million acquisition to expand in the U.S.