CrowdStrike Stock: The Bulls Are Ready to Strike

CrowdStrike Stock: The Bulls Are Ready to Strike

Kurtz explained Tuesday’s announcement of CrowdStrike’s extended detection and response network, known as their XDR coalition. He said the system allows multiple security providers and partners to share data points to help strengthen all of their products. The system utilizes advanced analytics and automated workflows to stop breaches even faster.

Every company, big and small, needs to protect itself from cyber threats and ransomware attacks, Kurtz added. Ransomware in particular is a huge challenge, Kurts said. The average ransom payout is now $6 million and if companies don’t pay it, data will be leaked on the Internet where it will be equally costly to clean up.

Let’s check on the charts of CRWD again.

In the updated daily bar chart of CRWD, below, we can see that the shares are trading between the 50-day and 200-day moving averages. The On-Balance-Volume (OBV) line declined slightly in September but now looks like it is resuming its longer-term advance.

The Moving Average Convergence Divergence (MACD) oscillator looks ready to cross to the upside for a cover shorts buy signal.

In the weekly Japanese candlestick chart of CRWD, below, we can see a doji or spinning top at the end of September to mark a low. The slope of the 40-week moving average line is positive.

The OBV line shows only a slight decline but the MACD oscillator has crossed to the downside with a bearish divergence — a lower high when prices made a higher high.

In this daily Point and Figure chart of CRWD, below, we can see an upside price target of $289. 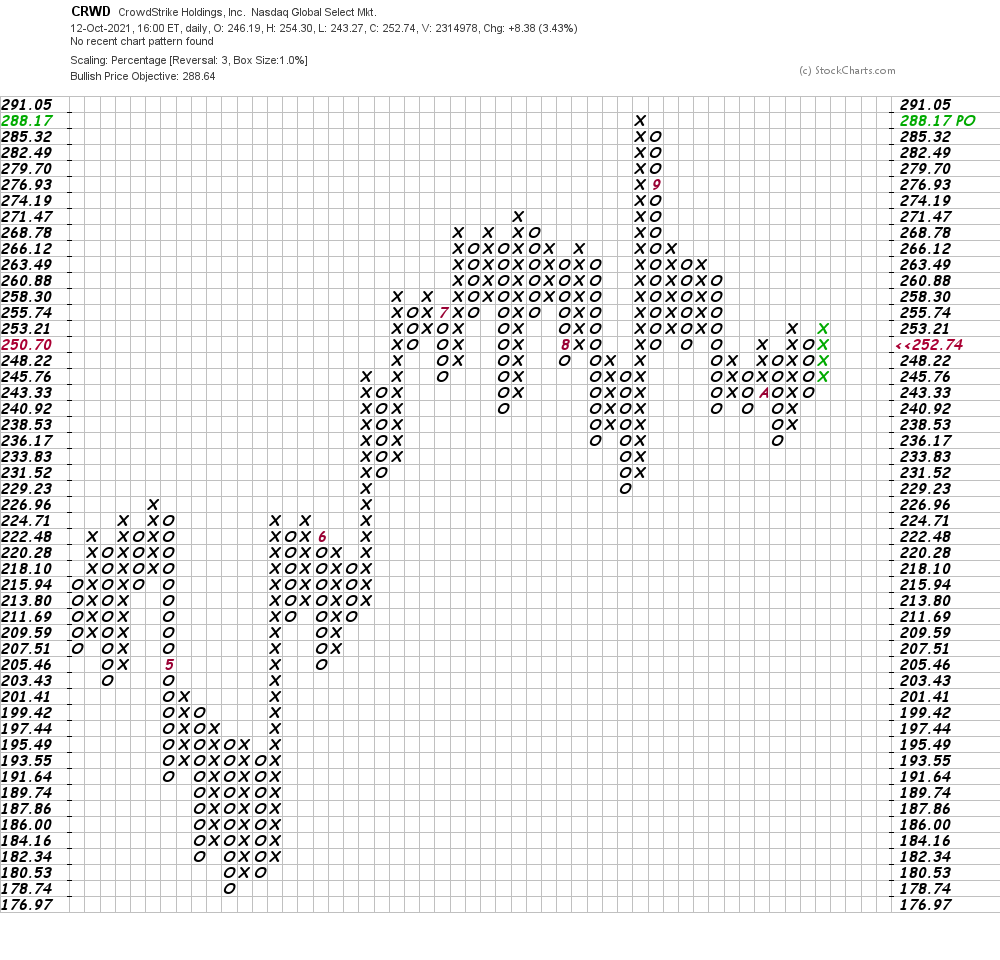 In this weekly Point and Figure chart of CRWD, below, we used a five-box reversal filter and got a longer-term price target of $531.

Bottom-line strategy: Traders could approach the long side of CRWD again but risk to $230 this time. The $289 area is our first price target.