The effects of the UK’s rapid rollout of coronavirus vaccines have begun to show up in the official figures on infections, hospitalisations and deaths: improvements in the data for the vaccinated over-80s population are outpacing those for younger people.

The trend comes as Boris Johnson, the prime minister, prepares to reveal on Monday the government’s road map out of the current lockdown, using data, not dates, to ease the current restrictions. It will raise expectations that the relaxation in Covid-19 restrictions can be more durable this year than last.

But the coronavirus data also shows that the vast majority of the improvements in health since the start of the year have resulted from the lockdown rather than vaccinations since declines in cases, hospitalisations and deaths have fallen almost as quickly for non-vaccinated groups as for those that have received jabs.

The prime minister will therefore need to balance caution about relaxing lockdown too quickly and having to reimpose restrictions against the emerging better signals that suggest restrictions can be relaxed relatively safely.

The UK has succeeded in delivering a first dose of Covid-19 vaccine to more than a quarter of the population, with only Israel and the UAE among larger countries inoculating a greater proportion to date.

With more than half of the people aged 80 and above having received their first jab by the middle of January, case rates, hospitalisations and deaths in this group of people have started to drop faster than the rest of the population. The effect is small and has only been visible in symptomatic cases since the second week in February. But that accords with the two-to-three week period after the first dose of the vaccine that doctors think is necessary for it to offer significant protection.

Professor Oliver Johnson, of Bristol university’s maths department, said: “The crucial admissions and deaths metrics have declined significantly for all age groups, with the timing of peaks consistent with a lockdown effect.

“However, in the last week or so, the decline has been steeper among vaccinated groups, suggesting the beginnings of a vaccine effect as observed in Israel. In the next few weeks we might hope that this gap will grow as the number of vulnerable people with protection continues to increase.”

With the effect on deaths and hospitalisations larger than that seen in case numbers, the vaccines appear to have had more success in limiting severe cases of Covid-19 than in stopping symptomatic infections.

The case for caution

In Israel, where more than 80 per cent of over 60s have already had two doses of the BioNTech/Pfizer vaccine, a less rigorous lockdown has seen infections decline at only half the rate as in the UK.

Both the UK and Israel had a weekly rate of close to 600 cases per 100,000 on January 12, but by Feb 18, the rate in the UK — at 126 — was under half the rate of 300 in Israel. A rapid relaxation of restrictions in Britain would almost certainly see a rapid reversal of the progress made because the virus prevalence rate is similar to what it was in early December when the last lockdown in England was eased. 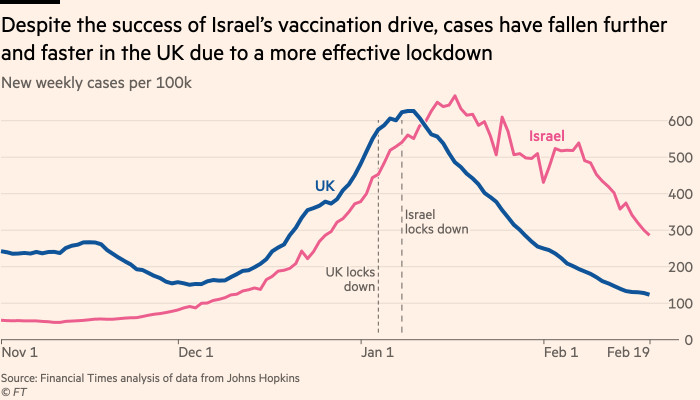 Any resurgence of cases would inevitably lead to more hospitalisations and deaths, as it did in the autumn, raising the prospect of further restrictions, again hurting economic performance.

In a new report on loosening the lockdown, Gemma Tetlow, chief economist at the Institute for Government, a think-tank, said that the evidence suggested there was little inherent conflict between health and economic objectives. “Failing to control the virus led to further lockdowns that have only damaged the economy more,” she said.

Even with the rapid decline in the the UK’s symptomatic infections, case numbers are no lower than the EU average and more than twice the rate in Germany, which has said it will not loosen its restrictions until weekly case numbers fall below 35 per 100,000.

There are also some ominous signs from some data that the UK’s decline in case numbers has slowed. In the latest update from the Zoe app, where users log symptoms, the decline in estimated cases slowed almost to a standstill over the past week especially in Wales, Scotland and the Midlands.

Professor Tim Spector, lead scientist on the Zoe Symptom App, from King’s College London, said this was not a time for complacency. “It’s unclear why this is happening, although people relaxing their guard after vaccination or altering behaviour in the cold weather are possible,” he added.

The case for easing the lockdown

With a vaccination effect emerging and all of the over 70s and most vulnerable adults already offered a jab, the government will hope that the extreme pressure on health services will begin to decrease in the weeks ahead.

Inoculations also offer the greatest hope against a resurgence of the virus’s most serious effects as the vaccinated groups increase as a proportion of the population.

Beds occupied by Covid-19 patients have already more than halved from a peak of 39,242 on January 18 to 18,462 a month later and are now on a steeply declining path, dropping on average almost 25 per cent per week.

The improving health data will put more pressure on the prime minister to consider the ailing economy during the third lockdown. With one of the strictest lockdowns in the world currently in operation, mobility — a proxy for economic performance — has declined more sharply in the UK than in other advanced economies with the exception of Slovakia. The result is likely to be a sharp contraction in the economy in the first quarter, highlighted by the 8.2 per cent fall in the volume of retail sales in January.

“While the drop in January activity is tracking far better than the first lockdown, winter restrictions have taken a big toll on the economy,” said Sanjay Raja, UK economist at Deutsche Bank.