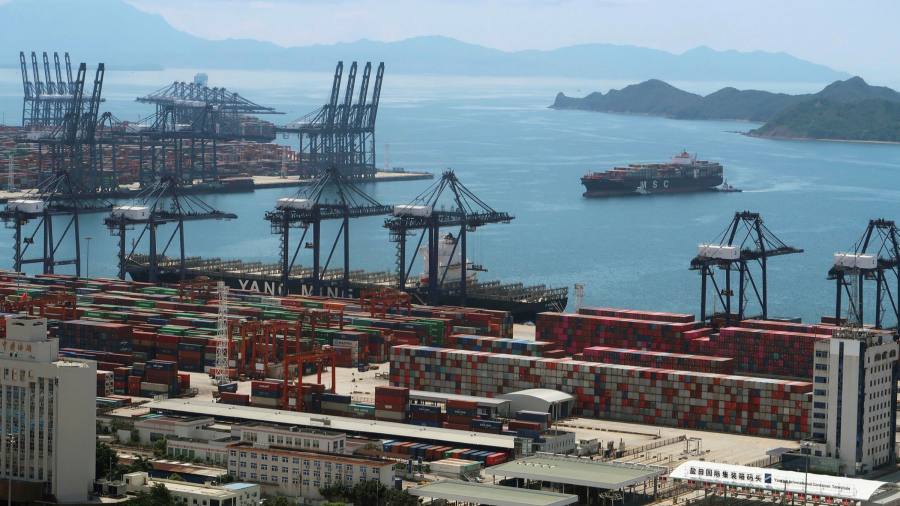 A Covid-19 outbreak in southern China is curbing activity at some of the country’s biggest ports, stoking fears that further disruption in international trade risk pushing up the price of its exports.

More than 100 new cases have been reported since late May in Guangdong province, one of China’s most important manufacturing hubs, leading to strict counter-measures from the government.

Processing at the Yantian container terminal in Shenzhen, which suspended exports for almost a week last month after workers tested positive, has plummeted. There has also been a sharp decline in the number of ships berthing as authorities enforce coronavirus prevention measures.

The slowdown at the terminal, which has worsened congestion at the nearby Chinese ports of Nansha and Shekou, highlights the vulnerability of global shipping to outbreaks in the country, where new infections have remained low compared with other big economies over the past year.

“It’s a question of the size of the terminal,” said Lars Mikael Jensen of Maersk, the international shipping company. “This is a terminal that is active in all markets, one of the biggest in the world and it leads to some sort of ripple effect.”

It also piles pressure on China’s own trade performance, which has boomed under the pandemic amid rising overseas demand for lockdown-related goods such as electronics and household appliances. Surging China exports have helped to support its rapid recovery from Covid-19’s initial hit to the economy.

Official data this week showed that Chinese exports rose 27.9 per cent year on year in May, compared with a low base last year. But they missed expectations of a 32.1 per cent increase, based on a Bloomberg survey of economists, and analysts suggested future performance could be weakened by the disruption.

“We expect June trade and production data will be affected,” said Iris Pang, chief economist for greater China at ING. “This could push up prices of electronic goods in general and affect China’s export prices and eventually import prices in the US and Europe.”

Global shipping has suffered a series of strains over the past year, including shortages of containers and problems with crew members unable to disembark at ports. In China, some manufacturers have turned to rail to transport their goods to Europe instead, though volumes remain a tiny fraction of the shipping trade.

“Other ports in China will likely become more cautious as well,” noted Zhiwei Zhang, chief economist at Pinpoint Asset Management. “Compounded with the pandemic in India and south-east Asian economies, the ship shortage, the rising commodity and shipping costs, this rise of Covid cases in Guangdong may contribute to higher inflationary pressure in other countries.”

“I think this is just the beginning. We may not be as lucky as last year,” said Penny Cheng, a shipping agent in Shenzhen, who said the shipping schedule had been delayed at the city’s port.

Local authorities are extremely sensitive about any rise in cases as the central government has heavily sanctioned provincial officials where Covid-19 has re-emerged. All residents of Guangzhou have been required to take a test, and cities across the province have prevented people from leaving if they test negative.