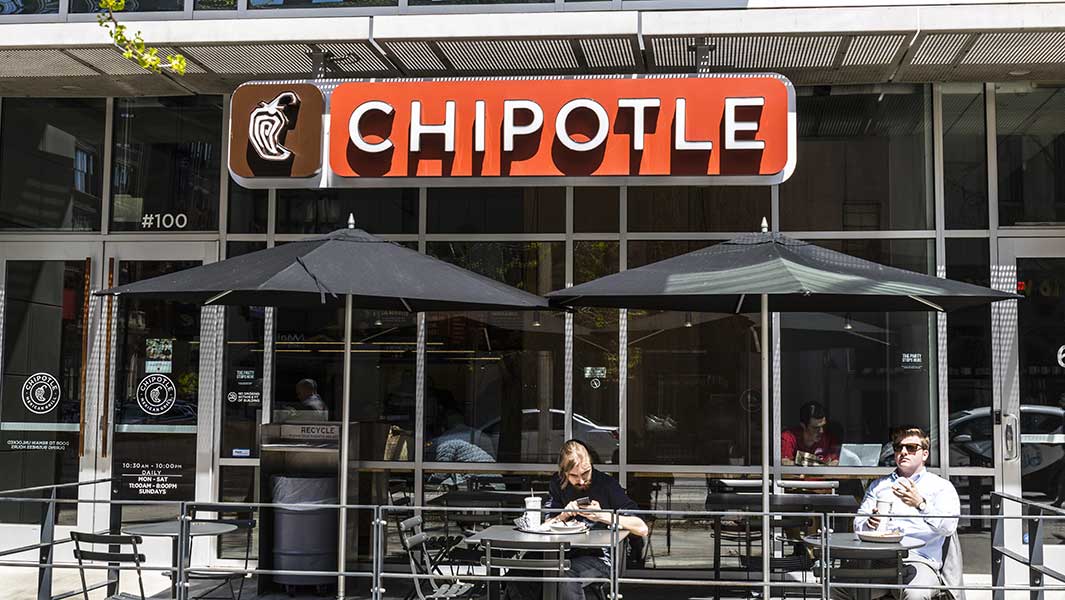 Chipotle stock, an under-the-radar chip stock, a hot solar IPO, a work-from-home stock and a homebuilder are all on this weekend’s menu of 5 stocks to watch. The group reflects two key qualities of this bull market: perseverance and breadth. All near buy zones, Chipotle Mexican Grill (CMG), KB Home (KBH), DocuSign (DOCU), MaxLinear (MXL), and Shoals Technologies Group (SHLS) are worth a closer look.

Chipotle stock is part of the IBD Leaderboard portfolio. Solar IPO Shoals was featured as the IBD Stock Of The Day on Friday.

The Nasdaq and S&P 500 both slipped from record territory over the past week, even as cyclical stocks surged to the fore. But the uptrend is still intact, according to IBD’s The Big Picture daily column. That’s the equivalent of a green light for investors to buy quality stocks at an appropriate entry point.

The biggest kudos for perseverance go to KB Home stock, which is holding near a buy point even as the 10-year Treasury yield that’s so key to mortgage rates just hit its highest level since February 2020.

Despite the recovery in Treasury yields, especially in the aftermath of Democratic victories in both Jan. 5 Georgia runoffs, KBH stock managed to hit a record high in late January, then twice more in February. That speaks to the staying power of housing in this cycle, as millennials covet a house with a yard.

In a Friday research note, Goldman Sachs analyst Susan Maklari upgraded KBH stock to buy from sell, hiking her price target to 51 from 32. She cited KB Home’s built-to-order model as a positive, contributing to a 54% backlog increase and earnings visibility.

After helping drive the post-lockdown recovery, homebuilder stocks have taken a back seat since the fall. KBH stock’s relative strength line, amid some ups and downs, is basically flat since June, meaning it’s been only average, matching the S&P 500’s gain. The RS line, the blue line in the charts below, is off its consolidation high and not even at a short-term peak.

A stabilization of long-term Treasury yields may be needed before top homebuilding stocks can resume their outperformance.

DocuSign stock was a huge winner in the first few months of the pandemic as its eNotary saw accelerated adoption. Then, just ahead of its Q2 earnings report on Sept. 3, the work-from-home stock went vertical, vaulting as much as 30% to 290.23 in two sessions. Sept. 2 also marked a stock market peak, with a market correction quickly following.

DOCU stock subsequently fell as much as 36%, hitting bottom on Nov. 10, just a day after Pfizer’s world-changing report that its vaccine was 90% effective.

Yet since then, DOCU stock has charted an upward path of mostly higher highs and higher lows, as DocuSign has proved its growing relevance beyond the pandemic.

DOCU stock has now worked its way back into a buy zone. On Friday, DOCU stock rose 1.6% to 265.16, extending the prior day’s bounce off its 21-day average. That carried Docusign clear of a 263.10 buy point based on its Jan. 12 high, which resembles a handle pattern at the end of a messy consolidation.

After massive outperformance in the early months of the pandemic, DOCU stock has only kept pace with the S&P 500 since August. But at least on a weekly basis, it looks like the RS line could be breaking higher.

Chipotle, which posted an 11% rise in same-restaurant sales in January, appears poised to emerge stronger from the pandemic. But Chipotle stock, another early pandemic winner, has gone flat on a relative strength basis for nearly six months.

Even still, CMG stock’s technical picture has some strong points. One key feature: Chipotle has held above its 50-day moving average since last April, with the exception of two weeks.

In other words, the bounce off its 50-day, or 10-week moving average has been a solid bet. Now CMG stock may be poised for another tradeable bounce. On Friday, Chipotle stock rose 1.2% to 1,473.09 on the first up day since falling back to its 10-week line. A further rise past its 21-day moving average, now 1,482.80, could offer a constructive entry point.

Chipotle stock is slightly extended from a double-bottom-base buy point at 1,366.76, according to an IBD Leaderboard analysis. However, when leading stocks take a breather and fall back to their 50-day or 10-week moving average, mutual funds and other big institutions often take advantage of the pullback to add shares.

As long as the current stock market rally is intact and the 50-day line is above the prior buy point, which is the case with Chipotle stock, investors can consider it a possible buying opportunity. Watch a stock closely to make sure it finds support. Leading stocks often do. Ideally, you’ll see a bit of a bounce before you pull the trigger.

MaxLinear doubled down on its connected home portfolio with a deal announced in April to buy Intel’s home broadband business for $150 million. That added about $70 million in quarterly revenue. MaxLinear sales had taken a blow starting in mid-2019 as it halted shipments to Huawei.

Shoals Technologies is living up to its billing as a hot IPO in the solar energy group that ranks No. 4 of 197 industry groups based on stock price performance and momentum.

Shoals makes electrical-balance-of-system solutions with all the components needed to carry the electric current produced by solar panels to the power grid. The Tennessee-based firm is profitable, reporting income of $29.5 million in the first nine months of 2020. Revenue grew $136.8 million, up 28% vs. the year-ago period.

However, SHLS stock hit resistance around 40 on five straight days. Investors could use this level as an early entry point. On Friday, Shoals stock rose 5.3% to 40.17, a record close.

While Shoals stock has traded for less than four weeks, IPO bases can be shorter, and initial breakouts can be quite powerful. The SHLS IPO base is tight, at just 16% deep, with relatively huge intraday swings that are coming in newly public firms, especially in recent months.

How a rush of a high-energy, momentum-embracing retail traders is remaking markets