Some trends quietly fizzle out without leaving a mark. Others implode, with everyone wondering what on earth we were thinking — like Tamagochis or fidget spinners. Occasionally, a halting, haphazard trend suddenly hits a point where it starts spreading like wildfire, and its success feels like it was always preordained. Electronic bond trading fits the latter category.

Fixed income markets have historically been overwhelmingly analogue. Some corners have slowly been dragged into the modern, digital era of trading — the bigger, more homogenous and liquid government bond markets especially. But, on the whole, trading has long stayed bilateral, bespoke and arranged by phone or Bloomberg messages.

The bond market was simply too fragmented, too idiosyncratic — just too dang messy — to be electronified like equities, many in the industry felt. While there are about 41,000 stocks in the world, there are millions of bonds, almost all of them with unique characteristics. Many trade only by appointment, if at all. Of the 21,175 corporate bonds outstanding in the US in 2018, only 246 of them traded at least once a day that year, and a sixth did not trade at all, according to Citi.

That spurred both banks and investment groups to modernise their trading infrastructure. Meanwhile, bond exchange traded funds grew quickly in popularity, both enabling and encouraging more algorithmic trading. Most mainstream government bond trading is now electronic, and it started making inroads into more traditionally bespoke areas, such as corporate debt. 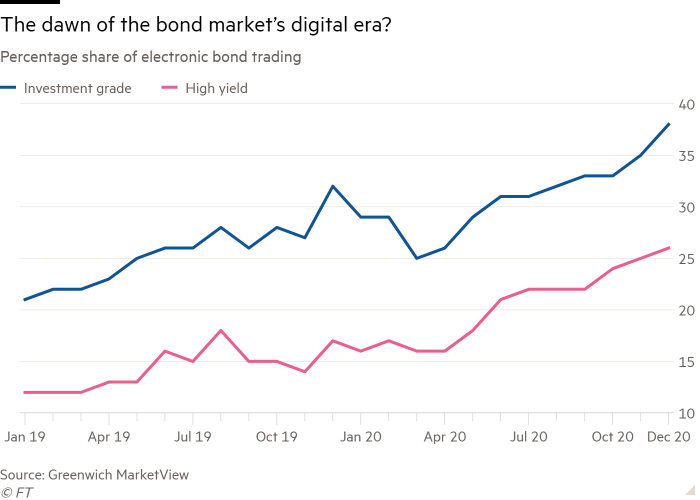 The Covid-19 pandemic could easily have interrupted this trend. After all, times of economic and financial strife should in theory favour the human touch of an experienced trader. Instead, it has supercharged the shift towards electronic trading — and now threatens to upend the entire bond market ecosystem far quicker than predicted a year ago.

In practice, it remains tricky to untangle what is truly a purely “electronic” bond trade from one that is logged digitally but still arranged, primarily, in a more traditional way by traders gabbing on the phone or on their Bloomberg terminals. Yet the volume data from the two dominant electronic fixed income trading platforms underscore how rapidly things are changing.

Nor was this a brief Covid-triggered burst. Electronic trading accounted for a record 38 per cent and 26 per cent of overall US investment grade and junk bond trading respectively in December, according to Greenwich Associates. And both MarketAxess and Tradeweb reported fresh records in January. 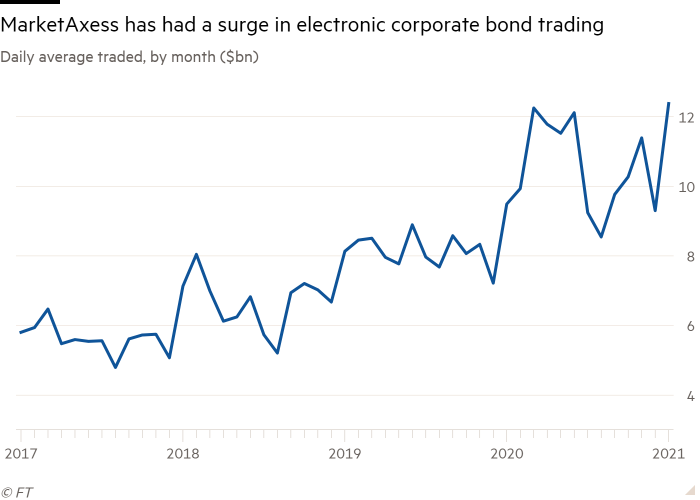 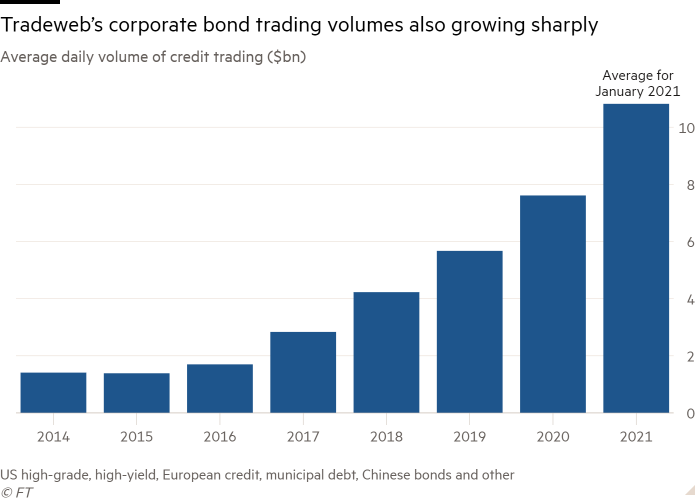 Further inroads now look inevitable. JPMorgan recently surveyed its asset management clients, and they predicted that 40 per cent of all their corporate bond trading will be electronic by 2022. Almost half of all government bond trading is already electronic, and is expected to jump to two-thirds by 2022.

There are limits to how far this can go. The differences between bonds and common stock are real. No matter how good the technology, those differences cannot be entirely erased. Nor is going electronic likely to make the bond market as a whole much more easily tradeable. The most likely outcome is a migration of liquidity, rather than an across-the-board enhancement of it.

Think of the bond market as a strip of nightclubs, where the popular hotspots can afford to invest in cutting-edge sound systems and laser shows. This may attract some new punters to the neighbourhood but dooms the less-fashionable ones to atrophy. 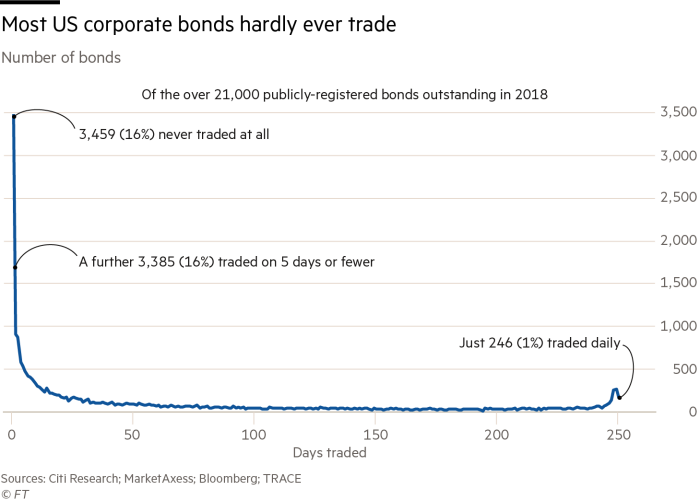 In other words, liquidity begets liquidity. As the most actively-traded corners of the fixed income market become increasingly electronified and easier to transact in, investors will naturally gravitate towards them, likely leaving a long tail of poorly, rarely or never-traded debt to languish.

Nonetheless, the longer-term implications are legion. Setting aside what it means for the career prospects of grizzled bond traders and salespeople who still think Python is a snake, the dawning of a more digital fixed income era raises a host of opportunities and challenges for investors, banks, borrowers and policymakers alike.

Tesla has made about $1 billion in profit on its bitcoin investment, analyst estimates