In trying to force a new economic settlement between the news industry and Big Tech, did the Australian government just save journalism — or break it?

Facebook and Google on Wednesday posted drastically different responses to a proposed new Australian law designed to channel some of their vast profits into the pockets of news publishers. These sent reverberations through the global news business and threw down a challenge to politicians around the world, some of whom view the Australian experiment as a model for how to reset the economics of online news inside their own borders.

The proposed law, at present making its way through the Australian parliament, would create a statutory code to cover bargaining between news groups and the most powerful online platforms. By addressing what local politicians claim is the excessive power of Big Tech, it is explicitly designed to make sure the platforms — initially limited to Google and Facebook — pay more cash to support local journalism.

Google bowed to the pressure at the eleventh hour by agreeing a spate of licensing deals with Australian media companies including Nine, one of the country’s largest media groups and publisher of the Sydney Morning Herald. But most significantly, an accord with News Corp covered all the Murdoch-owned news properties around the world, underlining the way Australia’s aggressive action could reshape the news industry far beyond its own borders.

Facebook, by contrast, resorted to an earlier threat and blocked the sharing of news on its services in the country. Users there on Thursday woke to find all news sites — including public service broadcasters — blacked out. Users elsewhere in the world were also prevented from seeing news from Australian outlets. 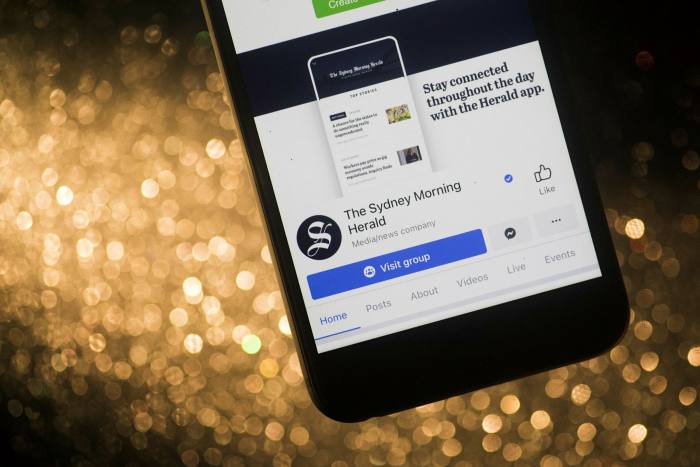 Google’s decision to reach deals with prominent publishers such as News Corp and Nine has headed off a showdown.

The search company had threatened to pull out of Australia altogether if it was forced into arbitration under the Australian code, claiming that this could have forced it to pay for links to other sites from its search engine — something it argued would have jeopardised the free and open web.

The News Corp deal enabled Google to avoid this “horrendous precedent”, said Aron Pilhofer, a former head of digital at The Guardian. Instead, it will pay for licensing content for a service called News Showcase and on YouTube. News Corp also suggested it would receive a larger share of the advertising revenue that flows to it through Google’s ad tech services.

Whether the pact will become a model for the rest of the news industry and what effect it will have on payment or journalism, however, are difficult to assess. Details of the deal were not disclosed, and critics said no other news organisation enjoyed the kind of political influence News Corp had in Australia, enabling it to extract the best terms. 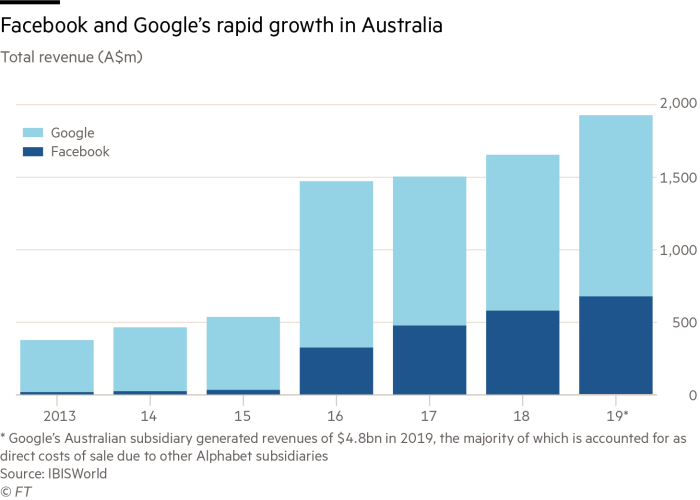 The detente sparked a flurry of speculation among other publishers about the sums involved, and what the Murdoch empire had promised in return. But there was consensus on one point: it would be far in excess of what others had negotiated, or would be able to replicate.

Australia’s bargaining code had already forced Google to markedly raise the offers it was typically making to news groups. While a recent framework deal in France shared €22m a year between 120 publishers, Nine was reported by local Australian media to have secured similar sums just for itself.

The unprecedented global nature of the Murdoch deal puts it into a league of its own, covering dozens of titles across three continents. Robert Thomson, chief executive, described News Corp’s “quixotic quest” for just compensation as something that would benefit other companies.

One news executive was more sceptical: “I have always suspected there will only be one global deal struck with one global publisher.”

Even if Google’s riches are spread more widely around the industry, it is unclear whether the money will do much to improve the state of journalism — the original reason for Australia’s assault on Big Tech.

News Corp and other publishers had not given any guarantees about how the extra money would be spent and could easily just use it to pad their bottom lines, said Pilhofer. “I don’t think we’ll see any impact whatsoever on the ability of local news organisations to stay in business and keep journalists employed to cover local news.”

While Google swallowed its complaints and paid up, Facebook has taken the unusual step of curtailing the free sharing of an entire category of information, provoking a storm of protest.

Facebook said it had been left with little choice. But at a time when the social media group is already under fire over the spread of misinformation and conspiracy theories on its services, the action to bar verified news presented an easy target for its critics.

“Their unwillingness to fairly compensate trusted news organizations speaks volumes about their commitment to protecting democracy,” said Jason Kint, chief executive officer of Digital Content Next, a US trade association for online publishers. 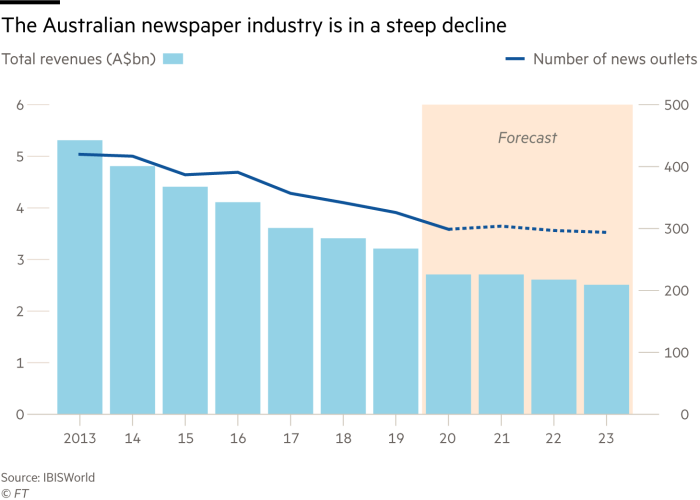 The Australia block was also a stark reminder of Facebook’s willingness to take unilateral action that can have profound effects on political discourse. It follows a storm of protest from conservatives in the US over its indefinite ban on Donald Trump.

For news publishers, meanwhile, the sudden end to social sharing fed a distrust that has been growing for a number of years. Facebook aggressively courted the news industry five years ago with promises to help it find a wider audience, and encouraged news companies to produce more video content for its services — before abruptly changing course and adjusting its algorithms to relegate news content.

While publishers had worried that Facebook wanted to marginalise their news on its platform, few imagined it would go through with a threat to stop it being shared altogether. The impact will be felt differently across the industry, with some advertising-reliant, mass-market publishers that depended more heavily on social sharing, such as MailOnline, looking vulnerable.

The history of Facebook’s dalliance with news amounted to “a series of broken promises”, said Bell. “There is an asymmetry here, whereby Facebook can make a big impact on how people receive information without really any accountability — and they can sidestep legal responsibility if they wish.”