Behind Dow 30000: A Self-Perpetuating Upward Cycle 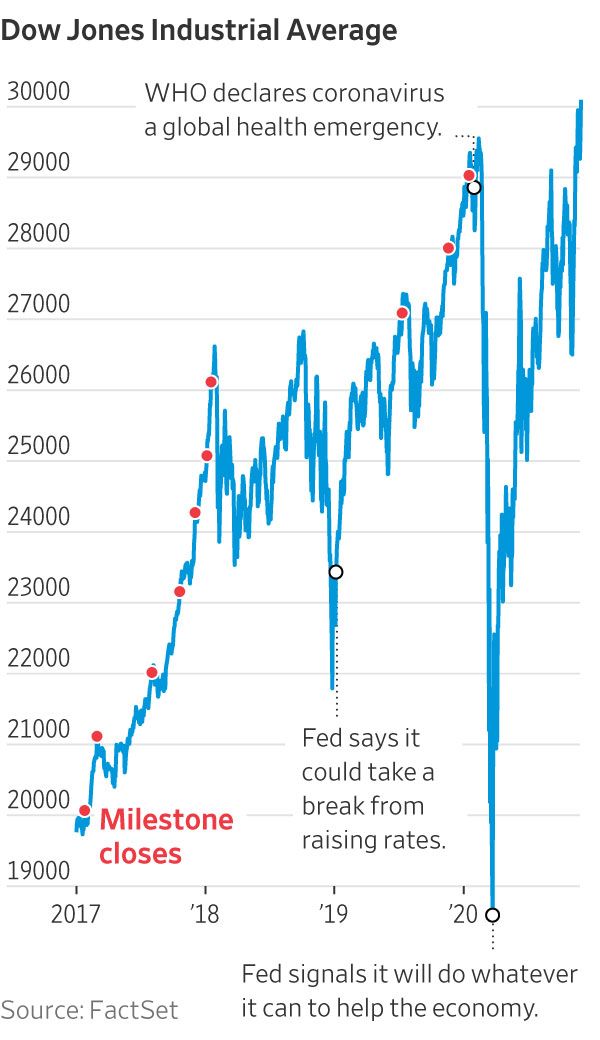 The U.S. stock boom has its roots in tactics that fund managers, small savers and Robinhood traders alike have applied over the past decade:

Keep hold of your investments, and returns will follow.

When there’s a crisis, buy.

The Dow Jones Industrial Average rose above 30000 on Tuesday, extending an eight-month rebound that has taken many analysts by surprise. The run has put the Dow up more than 60% from its March low, when the U.S. Federal Reserve ended a panic that wiped out trillions of dollars in investments by outlining a plan to counter the pandemic’s economic stress.

The market appears locked into a self-perpetuating upward cycle, defying the pandemic and accompanying economic woes. Some pessimists say today’s gains will inevitably lower returns tomorrow. But low interest rates mean investors big and small can’t expect to make much money in less-risky investments like bonds. So they are betting that the market’s momentum will continue, whether passively through index funds or actively with a buy-on-dips mantra.

“The real learning lesson over the last decade is you just put your head down, you don’t try to time the market, you take advantage of weakness,” said Dev Kantesaria, a managing partner at Valley Forge Capital Management, which oversees around $1.1 billion in assets. Over the past 13 years, he typically held about a fifth of his firm’s holdings in cash. At the end of October, that figure was close to zero.

This strategy paid off handsomely in the past for investors who added to shareholdings around the March 2009 financial-crisis nadir and during recession scares in 2011, 2015-2016 and 2018. 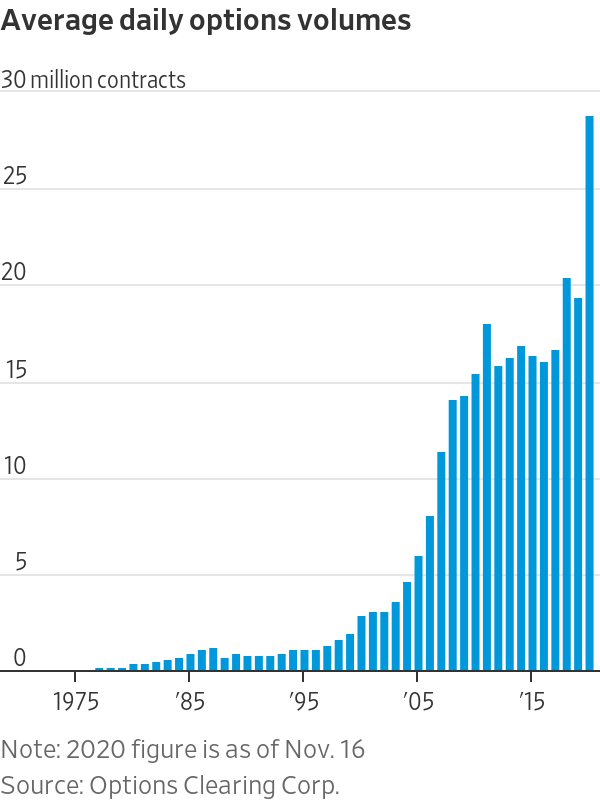 The just-buy-it strategy is working again for investors in popular stocks such as electric-car maker
Tesla Inc.
and vaccine manufacturer
Moderna Inc.
Tesla shares are up more than sixfold this year, while Moderna shares have roughly quintupled.

Trading volume has surged to new highs on options exchanges, where many individual investors congregate. Investors have opened millions of new brokerage accounts at
Charles Schwab Corp.
, TD Ameritrade Holding Corp., Robinhood Markets Inc. and others following the introduction last year of no-commission trading. Stock-discussion threads on websites such as Reddit and
Twitter
are multiplying.

John Bianco, a 55-year-old real-estate attorney who lives in Massapequa, N.Y., said he has made more than 300 trades over the past several months, surpassing his few dozen or so in previous years. When lockdowns all but closed his law practice, he bought a Peloton bike and began watching CNBC in the mornings while pedaling.

His purchases included shares of Tesla, which he said have more than tripled since, and cybersecurity firm CrowdStrike Holdings Inc., which have more than doubled. He bought
FedEx Corp.
,
DocuSign Inc.
and
Square Inc.,
all big gainers. “In a year where I have very little income, I’ve been lucky enough to increase the size of my portfolio,” said Mr. Bianco, who said he is up about 47% this year atop a more-than-20% gain in 2019. “It’s crazy. It’s a stock market I never thought I’d see.”

Underpinning the gains is the math of slow-growing Western economies. This year’s interest-rate collapse, driven partly by the Fed’s efforts to keep money flowing through the economy, has helped buoy stocks by reducing bonds’ attractiveness. Corporate earnings are expected to rebound next year, and the U.S. economy has steadily improved since spring, though it remains far from where it started the year. 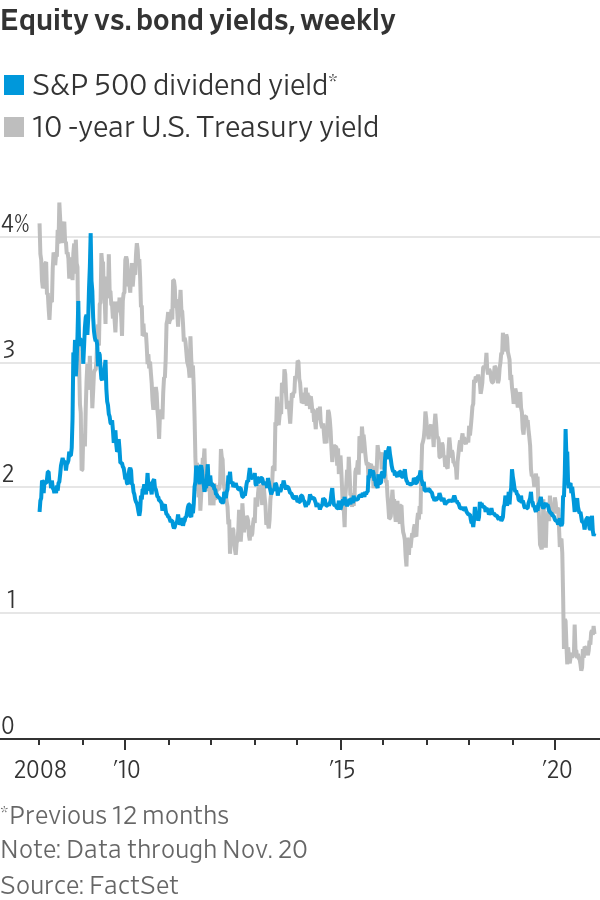 Some traders say stocks also benefit from fears that federal and central-bank stimulus will eventually result in a damaging bout of inflation, though there are no signs of such an upsurge. Many analysts who were long skeptical of stocks’ prospects now believe that they are likely to continue rising.

Bears make the case that stocks cannot continue double-digit percentage gains without borrowing from future growth, as they effectively did in the run-up to the market peak in 2000. Investors who bought and held stocks in the months around the March 2000 Nasdaq record suffered a lost decade of low and, at times, negative returns. Others warn about greater volatility in months and years ahead, as market momentum dissipates.

Though economic activity has generally recovered more quickly than many analysts anticipated, and employment has risen significantly in the months since the spring lockdowns ended, joblessness remained 6.9% last month. Before the pandemic, the last time the unemployment rate was that high was at the end of 2013.

The market’s resilience is striking to many portfolio managers because U.S. Covid-19 caseloads have soared to records, and some jurisdictions are again taking steps to limit opening hours for bars, restaurants and other businesses. Some analysts fear a replay of February, when new highs came just days before the economic slowdown sent the Dow and S&P into free fall.

“Recovering from the pandemic,” said Solita Marcelli, chief investment officer for the Americas for UBS Global Wealth Management, “will be the key driver of market returns in 2021.” 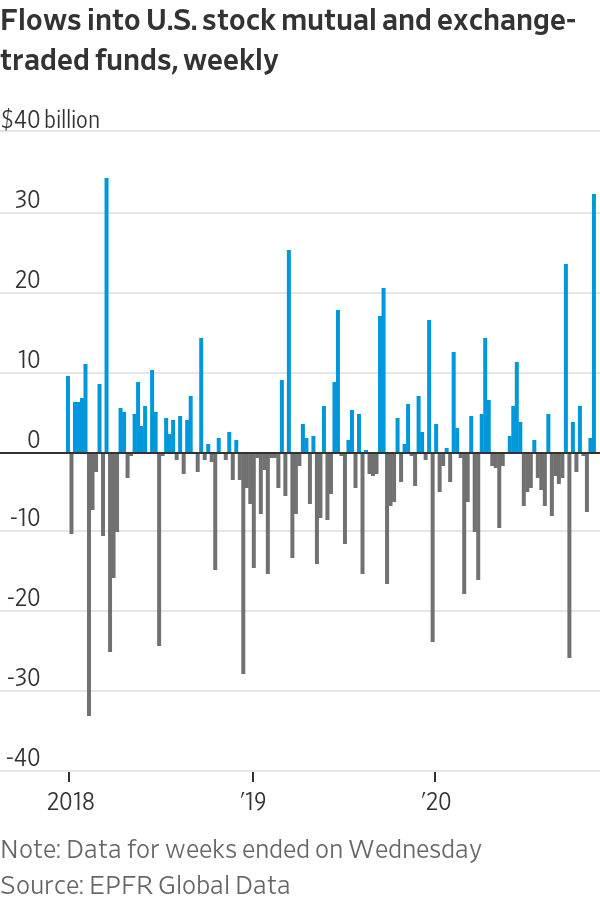 Investors plowed $32.5 billion into U.S. stock funds over the week ended Nov. 11, the most since early 2018 and the second-highest weekly total in data from EPFR Global going back to 2000. Institutional investors surveyed by
Bank of America
were recently the most bullish since 2018.

Optimism among individual investors was at its highest in almost three years in November and has remained elevated, according to recent American Association of Individual Investors surveys. Their trading activity has doubled from last year and now accounts for about a fifth of the total stock-market activity most days and a quarter of trades during heavy-volume sessions. 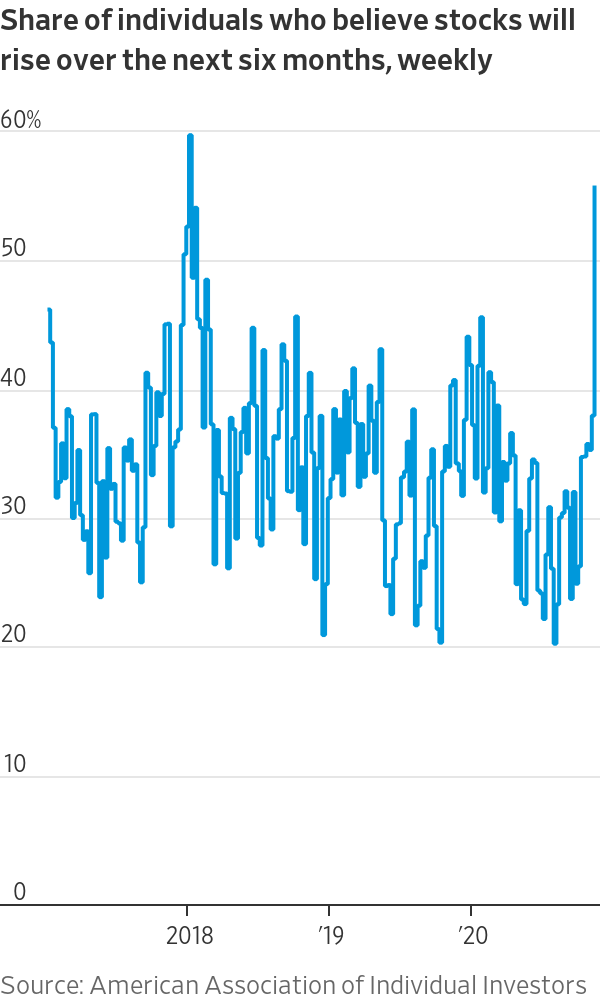 Michael Da Silva, a 24-year-old living in Toronto, said volatile days have provided opportunities to buy, including shares of tech giants like
Amazon.com Inc.
and
Facebook Inc.
He recently held shares of tech companies along with a special-purpose acquisition company—known as a “blank-check company”—that makes its own investments. He said his portfolio swelled this year and the returns helped him make payments on a gold two-door Toyota. 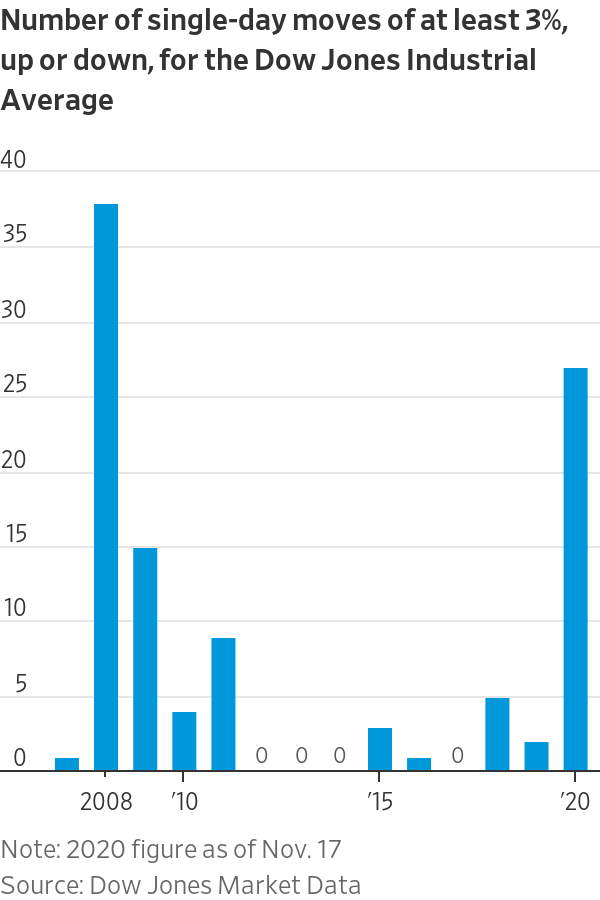 “I was buying the dip, or the crash,” said Mr. Da Silva, who shares his experiences on TikTok to more than 60,000 followers and the gaming platform Discord, where he hosts a community of traders, “and I was right.”

This year’s market crash and ascent have happened at an alarming and volatile pace. Stocks fell into a bear market—a drop of at least 20%—at the fastest pace in history. The Dow’s recovery to a new high took just 193 trading sessions, compared with an average of more than five years in prior drops. The Dow is up more than 60% from its nadir in March; over the past 10 years, it has nearly tripled.

The Dow has jumped up or down at least 3% on more days this year than in any stretch since 2008, according to Dow Jones Market Data.

Anchoring the market is the belief the Fed will always step in, especially after its bigger-than-ever effort earlier this year. The postcrisis era of ultralow interest rates looks set to continue for years, with central banks taking drastic steps to support economies through the pandemic. Low rates have made lower-risk investment returns generally harder to come by.

Why do you think the market keeps rising? Join the conversation below.

Expectations that interest rates will stay lower for longer have challenged conventional wisdom that a balanced portfolio should be 60% stocks and 40% bonds. “To get a 6% expected return moving forward, you may have to hold more stocks than ever before,” said Sébastien Page, head of
T. Rowe Price’s
global-multi asset division.

Sam Pemberton, 71, a retired lawyer in Austin, Texas, said despite his age, he buys only stocks and mutual funds. “I don’t believe in bonds,” he said. “It’s a foolish adventure for most people.”

Over the past decade, he revamped his stock portfolio, replacing shares of old-economy companies such as
Altria Group Inc.,
Philip Morris International Inc.
and
Colgate-Palmolive Co.
with fast-growing tech stocks like
Microsoft Corp.
, Google parent
Alphabet Inc.
and
Apple Inc.
Last year, he said, he beat the S&P 500 by a small margin, and he has exceeded his goal of doubling his money every seven years.

He said he’s up about 16% this year. He moved a third of his seven-figure portfolio to cash ahead of the stock market’s swoon and re-entered soon after the Fed took action, buying many of the same tech stocks he has long held. “I guess I have a high risk tolerance compared with most people,” he said. “But I’m confident in the long-term future of the economy and stock investing.”

Some prominent Wall Street figures, including billionaire Leon Cooperman, say central banks’ actions have overheated stocks, raising concerns around whether the market’s climb can continue unabated. “The Fed is driving the bus, driving everyone further out along the risk curve,” Mr. Cooperman said in an interview. “We’ve borrowed from the future. But when the party’s over, who pays the bill? Someone pays for that bill.”

Concerns remain that the market is swayed by big tech stocks, potentially spurring volatility if the group’s performance disappoints. The five largest S&P 500 stocks—Apple, Microsoft, Amazon, Alphabet, Facebook—recently accounted for almost a quarter of the index’s market capitalization, close to a record, according to
Goldman Sachs.

Many investors worry about a period of sustained low growth and low returns, like the one that gripped Japan. The Nikkei Stock Average hit a record in 1989—just shy of a highly anticipated 40,000-point mark—and hasn’t reclaimed those highs, closing at 26,165.59 on Tuesday.

There are important contrasts between Japan’s position then and America’s now, including major structural differences in the economies, America’s younger population and the Fed’s rapid and aggressive response to the latest downturn. Yet some asset managers say they are bracing for shrinking investment returns ahead.

“Currently, we are advising all our clients to invest as differently as they can from the conventional 60% stock/40% bond mix, just as we were advising them in 1999,” Peter Chiappinelli of investment manager GMO, which oversees about $60 billion in assets, wrote this month pointing to stock valuations that appear overly stretched and Treasurys that have grown expensive, appearing unlikely to serve as a hedge to stocks.

But after a long stretch of higher risks—including a global trade war and election uncertainty—the outlook is growing brighter. The election has passed, and a Covid-19 vaccine is likely soon.

The prospect of congressional gridlock alongside Democrat Joe Biden in the White House makes it less likely big overhauls on corporate taxes and regulations will pass, resulting in what a team of JPMorgan strategists led by Dubravko Lakos-Bujas called “market nirvana” in a November note to clients.

“The equity market,” they wrote, “is facing one of the best backdrops for sustained gains in years.”