Australia’s fight with Big Tech previews other battles to come

Australia’s fight with Big Tech previews other battles to come 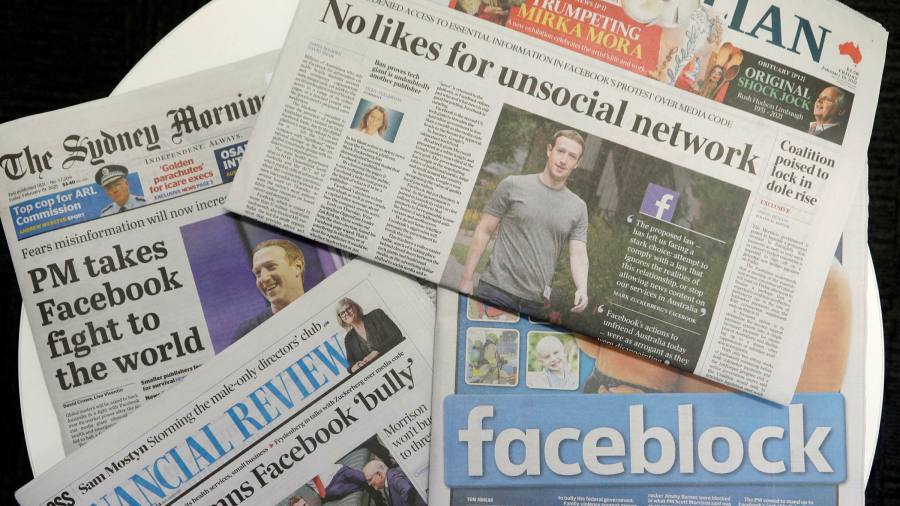 The fierce battle over Australia’s proposed media law is the latest test of the relationship among democratically elected legislators, media companies and Big Tech. It previews additional fights that will ensue when other countries seek to curb the powers of huge technology platforms and tries to settle who should pay for online news content. It is worth being clear about these battles at the outset that only one party has a democratic mandate, the other two do not.

Australia’s efforts to force Google and Facebook to pay for content created by traditional media companies or face hefty fines have so far produced two different outcomes. Google initially threatened to leave the country altogether, taking its search engine with it. Instead, after admitting it had buried articles from local media in an “experiment”, Google struck a deal last week with Australian publishers and a global accord with Rupert Murdoch’s News Corp.

Facebook’s response was more confrontational. The social media platform blocked the sharing of news in and from the country. In its rush, it also left users without access to the websites of some charities and government health and emergency services, just as a national vaccine campaign was being rolled out. This aggressive move is probably a last-ditch lobbying effort, an experiment that Facebook can afford to try in Australia’s relatively small market. But what lesson, exactly, is it trying to teach?

The company says only 4 per cent of its traffic is to news content. Yet that still amounted to 5.1bn reader click-throughs to Australian media last year. The gap between Facebook, which treats news as a sideline, and media companies, especially local outlets struggling without ad revenues, underlines a stark imbalance of power. Furthermore, because Facebook is a gateway to news reports for many users, the decision to block links to news leaves even more room for disinformation.

Facebook’s aggressive reaction to Australia’s proposed media law also contrasts with its inaction elsewhere, where local laws may have sometimes had consequences for users but less so for its business model.

Why, despite vocal concern by human right groups, did it not pull out of Vietnam in protest over government orders that digital platforms censor “anti-state” posts from users? Then there is the Philippines, where the government used Facebook to spread disinformation supportive of President Rodrigo Duterte. When Maria Ressa, founder of local news site Rappler, reported these to Facebook it failed to follow its policies and remove them in a timely way. One lesson from these examples is that Facebook’s power over access to information for its more than 2.5bn monthly active users is bigger than any government’s.

The Australian law is far from ideal. For one, the deals struck by Google will probably benefit News Corp more than the rest of Australia’s news industry, which lacks Murdoch’s lobbying power. But that issue may be addressed by a royal inquiry being sought by former prime minister Kevin Rudd into News Corp’s affect on news media, society and democracy.

Yet, however imperfect, the battle highlights important issues. It sprang from a legitimate democratic process, and revealed that Big Tech, especially in this case Facebook, is more interested in following its own rules than being held accountable. Scott Morrison, Australia’s prime minister, recently posted on his Facebook site that his government will not be “intimidated” and he is in regular contact with other world leaders about this issue. While big tech companies “may be changing the world . . . that doesn’t mean they run it”, he insisted.

The continuing controversy reminds us that when democratically elected leaders challenge certain business models, it can often be for good reason.