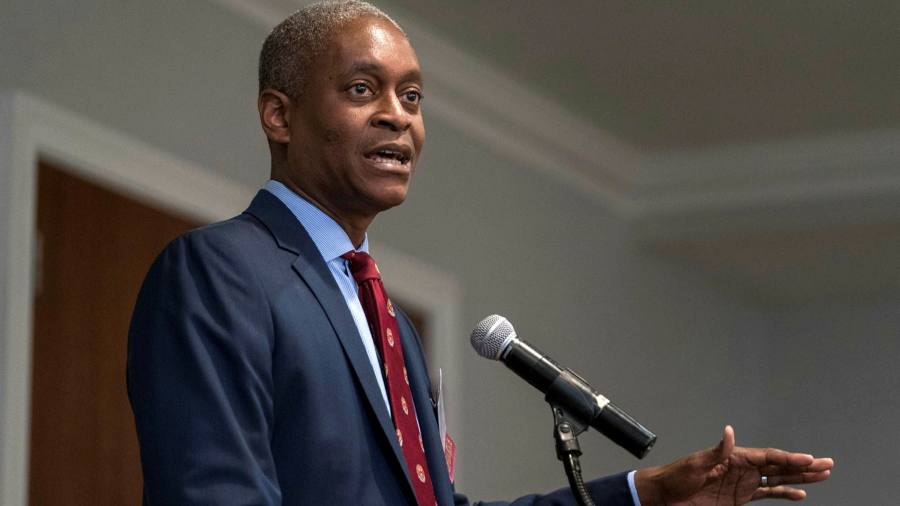 A sharp slowdown in jobs growth last month should not stop the US Federal Reserve from beginning to scale back its pandemic-era stimulus programme in November, a senior Fed official said on Tuesday.

Atlanta Fed president Raphael Bostic told the Financial Times that the labour market had made sufficient gains to allow the central bank to reduce, or “taper”, its $120bn a month asset purchase programme, which was put in place last year to shield the US economy and financial markets from the coronavirus-induced crisis.

“I’d be comfortable starting in November,” he said in an interview on Tuesday. “I think that the progress has been made, and the sooner we get moving on that the better.”

The Fed has said it would purchase Treasuries and agency mortgage-backed securities at the current pace until it saw “substantial further progress” towards maximum employment and inflation that averages 2 per cent.

Officials have already determined the inflation threshold has been met, with US consumer price growth hovering around a 13-year high. Fed chair Jay Powell said last month the employment goal was “all but met”, and specified that it would take only a “decent” jobs report to meet the mark — which markets participants interpreted as signalling an announcement in November.

But September’s extremely disappointing jobs report, which showed just 194,000 jobs created for the month compared with the 500,000 expected, threatened to add a wrinkle to that plan.

Bostic said there were notable signs of underlying strength, however, and the outlook appears bright enough to warrant a pullback in support.

Job openings are hovering near record highs, and those who are looking for work are finding positions, he said. Covid-19 cases also appear to be peaking nationwide, which will hopefully help to alleviate many of the labour shortages that have held back the economic recovery. He also noted that demand more broadly remained strong.

“As long as we have those pillars, employers have signalled to me that they’re going to be looking to continue to hire to meet that demand, and that should translate ultimately into some solid growth numbers,” Bostic said.

Bostic added that the tapering process should begin soon in order to create space for the Fed to raise interest rates as soon as next year, if necessary.

Bostic has pencilled in one interest rate increase next year — a view shared by exactly half of his colleagues, according to projections released last month. He said he was also keeping an “open mind” in the event the Fed needed to move more quickly in 2022.

“The more policy space we have, the better,” he said. “Given that we have made that progress, I think we should be acting robustly to create that space. This is really the time to move forward, and I’m going to really advocate with my colleagues that we do that soon.”

By next year, he expects the more stringent tests for interest rate increases set out by the central bank — maximum employment and inflation on course to “moderately” exceed 2 per cent for some time — to both be met.

There is significant uncertainty about how long these inflationary pressures will last, he said, adding that he was speaking frequently with business and consumers in his district to gauge how they are adjusting to more persistent supply chain disruptions and higher prices.

When asked about the ongoing trading controversy at the Fed involving multiple senior officials, which has since sparked an investigation by the central bank board’s inspector-general and a sweeping internal ethics review, Bostic told the FT it was “appropriate” for the rules to be re-evaluated.

“It’s important that we do all that we can as an institution to preserve the public trust,” he said. “Anything that advances that is something I’m going to support.”

Bart van Ark: ‘Productivity is done by the private sector’