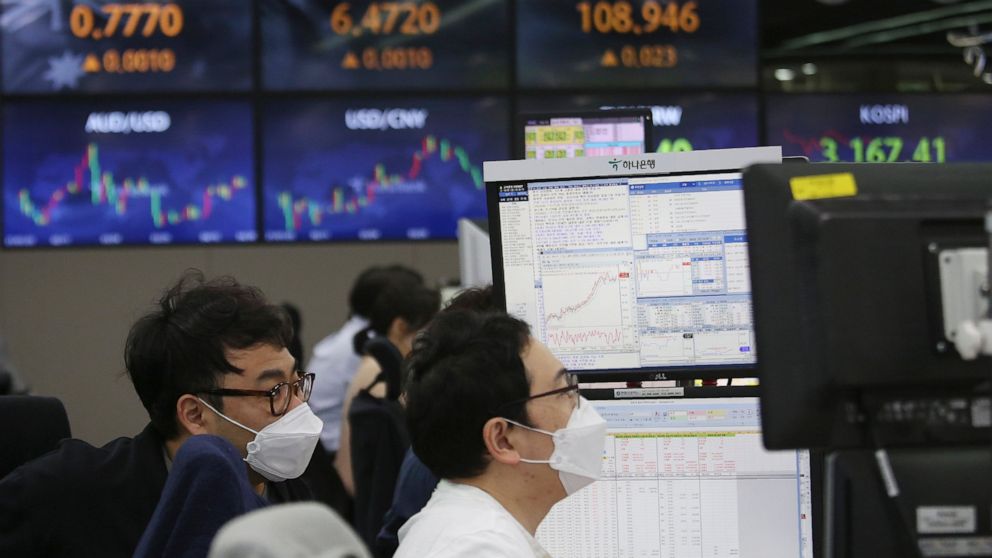 TOKYO — Asian shares were mostly lower Friday amid uncertainty about the prospects for a global economic recovery from the coronavirus pandemic.

The regional market dips came despite reports of strong economic growth in South Korea and a moderation of the unemployment rate in Japan, despite a resurgence of the pandemic.

Major recent outbreaks and slow progress in vaccinations have added to worries about the pandemic in Asia, despite some nations such as Taiwan, South Korea and China faring relatively well in COVID-19 related illnesses and deaths.

Japan remains a poor performer on those fronts, with deaths now topping 10,000 in what experts are calling a fourth wave of infections. Tokyo and some other urban areas are under a government-declared state of emergency, but reports say people are still going out and traveling within Japan over the Golden Week holidays that last through next week.

“Investors will be looking for clues to see if Asian corporate earnings will confirm a trend in economic and corporate profit growth or if it is already starting to peak from here,” said Anderson Alves, a global macro analyst at ActivTrades.

Investors weighed the latest batch of company earnings reports and encouraging economic data. A report showing that the U.S. economy grew sharply in the first quarter added to data pointing to a recovery from the recession brought on by the pandemic. Other upbeat reports included data showing that more Americans were signing contracts to buy homes in March after two months of declines.

Smaller company stocks, which have been outperforming the broader market this year, gave back some of their recent gains. The Russell 2000 index lost 0.4%, to 2,295.46.

The rollout of COVID-19 vaccinations, massive support from the U.S. government and the Fed, and increasingly positive economic data have been driving expectations for a strong rebound for the economy and robust corporate profit growth this year. That’s helped stocks push higher and kept indexes near their all-time highs.

Still, some of the big risks to the market include rising inflation getting out of hand and any aspect of the virus pandemic worsening and throwing off the economic recovery, said Keith Buchanan, senior portfolio manager at Globalt Investments.

“Without one of those two, the macroeconomic direction seems clear,” he said.

So far, company earnings for the first three months of the year are largely exceeding Wall Street’s expectations and stoking bullish profit outlooks for 2021.

Facebook jumped 7.3% after the social media giant reported stronger-than-expected results for the first quarter thanks to soaring ad revenue.

Amazon.com reported after the close of regular trading that its profit more than tripled in the first quarter. Its shares jumped 4.2% in after-hours trading.

Auto companies fell sharply after Ford warned that a worsening global computer chip shortage could cut its production in half during the current quarter. Ford fell 9.4% and General Motors fell 3.4%.

On the economic front, the Commerce Department said that the U.S. economy grew at a brisk 6.4% annual rate in the last quarter. That acceleration is expected to increase through the summer as more vaccinations are administered and COVID-19 cases continue to fall. Meanwhile the Labor Department said the number of Americans who filed for unemployment benefits fell again last week.