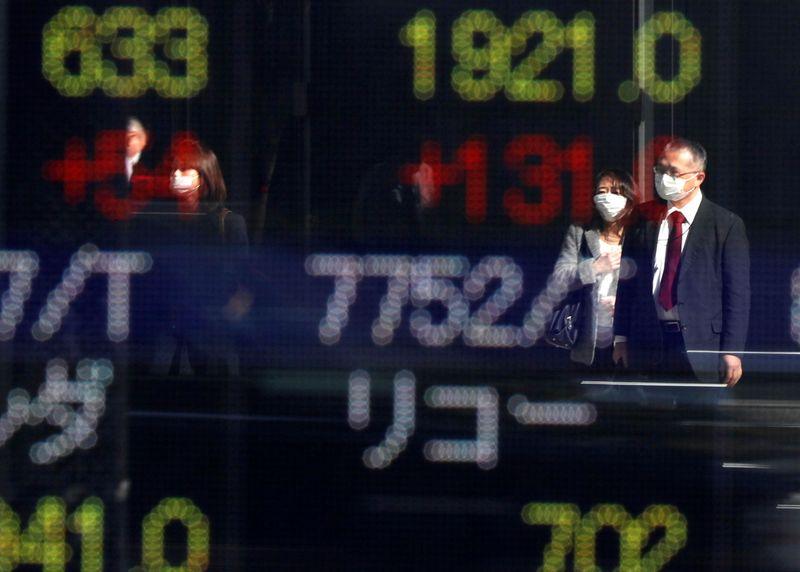 (Reuters) – Asian equities are poised to rise on Tuesday after the S&P 500 and Dow indexes set records as a streak of strong U.S. economic data fueled optimism even as a smaller-than-expected climb in 10-year Treasury notes eased inflation concerns.

Investor sentiment was buoyed by a survey from the Institute for Supply Management (ISM) on Monday showing activity in the U.S. services industry reached its highest level on record in March. The data came after a jobs report on Friday beat forecasts with 916,000 added to the U.S. economy last month.

“The jobs report set the stage for what we’re seeing today,” said Thomas Hayes, chairman of Great Hill Capital LLC in New York. “It’s not only that the report crushed expectations but it showed that wage inflation was subdued as people compete for labor.”

The S&P 500 and the Dow – the benchmark Wall Street indexes – have rallied in recent sessions as widespread vaccinations and an unprecedented government stimulus boosted investor confidence in an economic rebound and spurred demand for sectors, including energy, financials and materials, which are primed to benefit from economic reopening.

On Monday, gains were led by sectors that have underperformed recently, including communication services, consumer discretionary and technology, as the 10-year U.S. Treasury yield remained below a 14-month high hit last week.

“The rate of change with the 10-year yield has slowed and that has created a runway for some of the left behind sectors in recent weeks like tech and other yield sensitive areas like utilities,” Hayes said.

Benchmark 10-year notes last rose 3/32 in price to yield 1.7127%, from 1.72% late on Friday. The yield curve steepened on Monday after flattening the previous session as the spread between U.S. 2-year and 10-year yields rose to 154 basis points.

Oil prices fell as increasing OPEC+ supply and rising Iranian output, along with the threat of a new wave of COVID-19 infections, offset hopes for a demand rebound driven by economic revival.

'We went here, there and everywhere to make it happen'