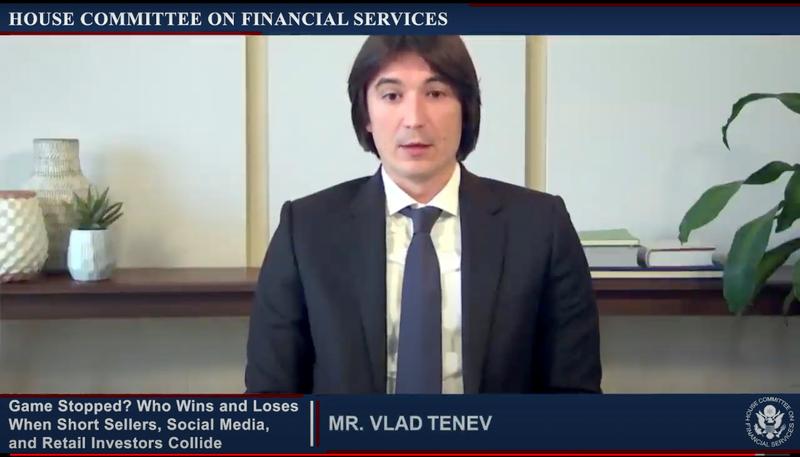 WASHINGTON (Reuters) – Robinhood CEO Vlad Tenev told a congressional hearing that his decision to curb buying in some stocks such as GameStop Corp during a period of extreme volatility was unavoidable, but industry experts said it only underscored the risks the popular trading app was willing to accept to expand its market share.

Robinhood’s Jan. 28 restrictions on buying GameStop and other stocks that hedge funds had bet against drew the ire of its customers and U.S. lawmakers at a hearing on Thursday. They accused it of doing Wall Street’s bidding by shielding the hedge funds from an army of amateur traders banding together on Reddit to take them on.

Tenev reiterated in the hearing his prior explanation for the move, saying it was dictated not by hedge funds but by a requirement that Robinhood come up with an additional $3 billion in collateral to guarantee customer trades. He said it was an extremely rare “black swan” event caused by the unprecedented volatility.

Yet Jan. 28 had been preceded by several days of frenetic trading as amateur investors flocked to Robinhood. That should have served as a warning that the flood of orders was becoming unsustainable without setting more capital aside, market structure experts said.

Robinhood was forced to quickly raise $3.4 billion from its investors to stay in business and cover potential future collateral calls.

“Nothing I heard today suggests that Robinhood was prepared for its margin calls. No responsible broker-dealer would make abrupt, ad-hoc trading halts the cornerstone of its liquidity risk management program,” said Joseph Cisewski, special counsel at Washington think-tank Better Markets.

A spokeswoman for Robinhood did not immediately respond to a request for comment.

The capital call that Robinhood faced was due to the standard two-day processing time required for trades to settle. Brokerages are required to post collateral with clearinghouses to guarantee the trade in case either party defaults before settlement.

Robinhood’s Jan. 28 collateral requirement was a 10-fold jump on its Jan. 25 requirement, Tenev said. By restricting trading, Robinhood was able to slash it to $737 million.

Tenev appeared to contradict himself during the hearing, stating several times that Robinhood did not experience a liquidity crisis and that it had raised money for future collateral demands, only to concede later that the trading app was forced to restrict buying because it did not have the $3 billion.

“The clearing house mechanism is in place … to build financial system stability. That is something we will be looking at to ensure everything functioned as intended,” U.S. Securities and Exchange Commissioner Hester Peirce said in an interview last week.

The Depository Trust & Clearing Corp, the clearing house which called for the $3 billion in collateral, said in written testimony that clearing brokers should not be taken by surprise because its rules and methodologies are public and transparent.

It said it provides calculators and tools that allow brokers to “monitor their risk in near real-time” and to estimate requirements for hypothetical scenarios.

Robinhood’s decision in 2018 to launch its own clearing broker to process trades may have exacerbated its financial burden on Jan. 28, some market structure experts said.

The structure allowed it to cut costs by eliminating its external clearing broker, which acted as a middleman between it and the clearinghouse, but that meant Robinhood was also assuming total responsibility for the capital calls in times of volatility.

The market experts said it was unlikely that an experienced clearing broker would have allowed Robinhood to take on so much risk in the first place.

Reporting by Michelle Price in Washington, D.C., and Anna Irrera in London; Editing by Greg Roumeliotis and Leslie Adler

Exclusive: Coming bill would allow U.S. news publishers to team up when negotiating with Facebook, Google