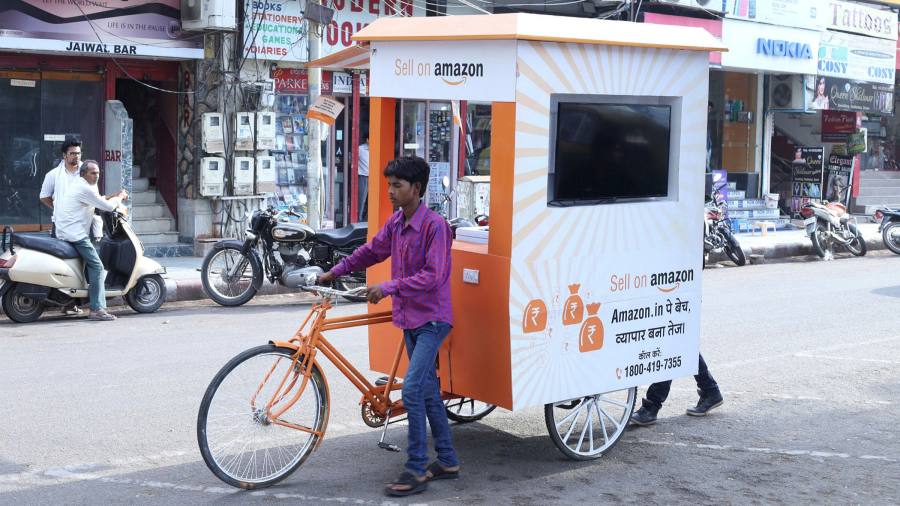 India’s Supreme Court handed Amazon a lifeline on Monday in its fight for the country’s vast retail market by temporarily barring Indian retailer Future Group from closing a $3.4bn deal with Reliance Industries.

Amazon is racing against time to stop Reliance’s chairman, Mukesh Ambani, from buying up Future’s 1,500 fashion and grocery stores and boosting his ambitious JioMart venture, which delivers daily essentials from a growing network of small shops.

Ambani swooped for the ailing Future Group late last year, after it missed a bond payment and its credit rating was downgraded to “near default”.

The deal has been signed off by regulators and is pending a green light from the National Company Law Tribunal (NCLT) and a vote by Future’s shareholders.

But Amazon alleged that the sale breached a contract it had with a subsidiary of Future that barred Future from selling its retail assets without Amazon’s consent.

An arbitration panel in Singapore called in October for the deal to be put on ice pending a final verdict, and Amazon appealed to India’s Supreme Court to intervene.

On Monday, the Supreme Court agreed the NCLT should not “sanction” the deal until it has heard the case, which is scheduled for March.

Amazon’s fear is that, once Future’s shareholders vote, any legal action will become “irrelevant”, said a source with knowledge of the company. “There is no point in closing the stable door after the horse has bolted,” he said.

The deal would give Reliance, which is already the country’s biggest offline retailer, another national network of stores and brands including Big Bazaar and the gourmet food store Foodhall.

It would strengthen JioMart as a competitor to Amazon, which currently has just under a third of India’s booming ecommerce market, estimated to be worth $86bn by 2024, according to research firm Forrester.

Neil Shah, an analyst at Counterpoint, said that Reliance was racing Amazon to win over millions of mom-and-pop stores. JioMart taps into the 400m users of Reliance’s Jio mobile phone network and has partnered with WhatsApp for payments.

“Reliance getting stronger is direct competition to Amazon,” said Shah. “It’s a battle of technology companies in the end and it’s the data that counts rather than just building a retail channel, it’s a means to an end.”

Following its Future deal announcement in August, Reliance’s retail arm raised more than $6bn from investors including Silver Lake and KKR for just over 10 per cent of the company.

Amazon has cast the battle with Future and Reliance as the latest example of the uneven playing field foreign investors face in the country. Its case comes as Vodafone and Cairn Energy are fighting long-running legal disputes over retrospective taxes with Prime Minister Narendra Modi’s government.

But Future argues that Amazon’s contract was with subsidiary Future Coupons — which markets and distributes gift and loyalty cards — not the entire group, so the international arbitrator’s order is not valid and the deal can go ahead.

Its lawyers have likened Amazon to the East India Company and said it was obstructing the transaction “to prevent any competition in the Indian retail market”.

Amazon acquired a 49 per cent stake in unlisted Future Coupons in 2019, with the right to buy into the flagship company after a few years. Amazon also holds minority investments in More, a supermarket chain, and department store chain Shoppers Stop.

Together with Walmart-owned Flipkart, Amazon commands about 70 per cent of the online market in India. However, India’s regulations currently restrict a foreign company from running online “multi-brand retail” stores, similarly to how Amazon operates in the US.

Legal experts said Amazon may have invested in Future Coupons to work around the FDI rules and exercise control indirectly, with the hope of eventually being able to invest further if and when the rules change.

While the legal battle continues over enforcing the international arbitrator emergency order, there is a good chance Future and Reliance will close the deal and come out on top, said Nigam Nuggehalli, law school dean at BML Munjal University in Gurgaon outside New Delhi.

“When Amazon entered a complex structure at this time, it was already sailing close to the wind,” added Nuggehalli.

“Lawyers are basically arranging contracts to meet the challenges of FDI regulations and tax compliance and things can go wrong,” he said. “When that happens you have cases like Vodafone and Amazon/Future.”

Future, in deep distress after India’s coronavirus lockdown and in danger of liquidation, has argued that it will collapse if the deal does not go through, putting 25,000 employees out of work.

Debanshu Mukherjee, a co-founder of the Vidhi Centre for Legal Policy, said Indian courts would probably consider it important to keep the company alive to save jobs.

“Courts are also considering whether the company survives and they would look at this factor,” said Mukherjee. “Everything will be worse if the underlying asset loses all its value.”